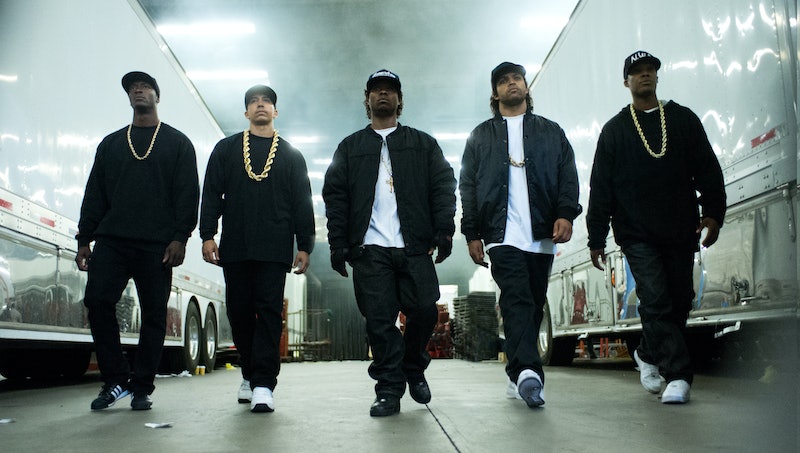 From the day it was announced that there'd be an N.W.A. biopic, Straight Outta Compton, hardcore fans were waiting to hear which actor was going play which rapper — and the casting couldn't have been more perfect. The roster includes talented up and comers such as Jason Micthell, who's a doppelganger for Eazy-E. Corey Hawkins is a dead ringer for a young Dr. Dre, and Neil Brown Jr. and Aldis Hodge slip effortlessly into the roles of DJ Yella and MC Ren. Then there's the role of Ice Cube; who better to play the role of Cube (with much brilliance, I might add) than his own son, O'Shea Jackson Jr.? The core cast members amazingly embody the story of the groundbreaking rap group, but there are "cameos" throughout the movie. There is one scene in particular that is causing excitement among hip-hop fans everywhere — and that's the moment when Tupac appears in Straight Outta Compton.

Yes, all the buzz about a Tupac scene are true. His "cameo" is in the last third of the movie when Dr. Dre has left N.W.A. and is working with Death Row records. Dre walks into the studio and who do we see spitting rhymes into the mic? None other than the late, great rapper Tupac, played by Marcc Rose. We even get a tease in the scene about the making of the Dre/Tupac duet "California Love," which would later become a West Coast anthem.

Casting the main cast was spot-on, but the movie outdid themselves when they casted Tupac. The resemblance between Rose and the rapper is amazing — so amazing that it's eerie.

This image of Rose in costume as Tupac posted by Boyz n the Hood director John Singleton is just one of many that will make you do a double take at the uncanny resemblance. Here's another one that Rose posted of himself with Dr. Dre.

I'm in awe in how identical they look.

Besides Rose's turn as Tupac, Straight Outta Compton has some other spot-on "cameos" of rappers who were integral in the N.W.A. story.

Marlon Yates Jr. as The D.O.C.

Besides his near-death car accident and the occasional on-screen appearance, the D.O.C. isn't largely showcased in the movie, but Yates gave him justice. He was a big part of N.W.A. and a big part of hip-hop history.

The actor/stuntman tweeted out this picture of himself that captures the ruthless demeanor of the Death Row mogul. You don't want to mess with him.

Sheldon A. Smith as Warren G

Blink and you just might miss Smith as Warren G., who is also Dre's stepbrother. He also introduced him to...

You can't mention Dr. Dre without mentioning Snoop Dogg. After Warren G. introduced him to Dre, history was made. When you see Stanfield (who you may recognize from movies like Selma, Dope and Short Term 12) on the screen his chill swagger and Long Beach baseball cap, you immediately know who he is supposed to be.

All of these actors embody their real-life characters so much that it's like you're literally re-watching this historic era of hip hop.

More like this
Rita Ora Celebrates Finding Her "Fairytale" Ending With Taika Waititi
By Sophie McEvoy and Catharina Cheung
Everything You Need To Know About ‘Black Panther: Wakanda Forever’
By Bustle Editors
Christian Bale Sang With Taylor Swift & His Daughter Can't Believe It
By Radhika Menon
Everything To Know About Taylor Swift’s 10th Studio Album, 'Midnights'
By Grace Wehniainen and Jake Viswanath
Get Even More From Bustle — Sign Up For The Newsletter