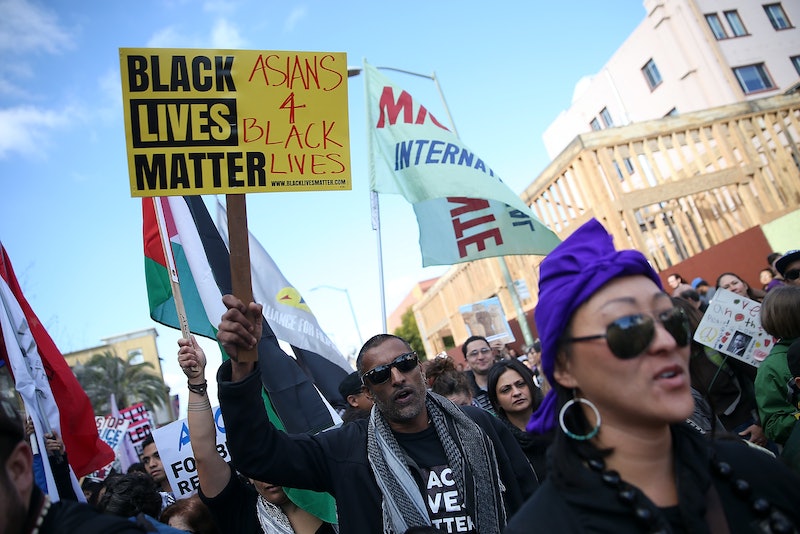 There's an important movement happening behind the scenes that few have yet to acknowledge amidst all the controversy over the #BlackLivesMatter campaign — you have to practically dig for it, but it's there. Buried beneath the chaotic media discussion over race relations is #Asians4BlackLives, a hashtag that perfectly summarizes how minorities ought to be supporting one another in times of injustice and social crisis. The trend of Asian American support for the black Civil Rights movement isn't new per se, having roots in the civil rights struggles of the 1960s with the slogan "Yellow Peril Supports Black Power," but recently, it seems to be making a promising resurgence under a new name.

"There is a sentiment among minority groups that what affects one minority group affects every minority group," explained Huffington Post op-ed columnist Dan Truong last month. "This sense of camaraderie and brotherhood Asian Americans can give to black Americans stems from the recognition that [individuals like] Trayvon Martin could just as easily have been 'Tranh Van Minh' [and that] any Asian could easily have fallen under the historically ingrained system of 'othering' George Zimmerman clearly used to make his decision."

A quick skim through the Twitter posts under the hashtag shows the sentiment is catching, albeit slowly. Some have used the opportunity to their advantage, attempting to increase awareness of the meaning behind the movement and spur other Asian followers into supporting it as well.

"There needs to be more vocal support from our demographic," wrote one user, frustrated with recent comparisons from Charleston, South Carolina shooting suspect Dylan Roof's manifesto, in which he maligned the black community and lifted up Asian Americans as a "model minority" of sorts.

Others have tagged their photos with the hashtag, displaying images of themselves protesting the police-related deaths of black citizens like Baltimore's Freddie Gray, who suffered fatal injuries while in police custody, and Akai Gurley, a 28-year-old black man killed by Officer Peter Liang, a police officer of Asian descent, in an "accidental discharge" in Brooklyn, New York, this past November.

My fellow Asian Americans: Our black brothers and sisters bore the burden for us so that most of us, and our families, could be here (Immigration Act of 1965). It's time for us to stand and bear the burden with them. #BlackLivesMatter.

The specific legislation that her sign mentions was first discussed in the early '60s, thanks in large part to the rising Civil Rights movement, which called for equality among the races. That discussion, in turn, opened the window for Congress to begin drafting new immigration policies that would eliminate antiquated nationality-quota systems and replace them with expanded qualifying categories and increased opportunities for families looking for a place to call home. When the landmark Immigration and Naturalization Act passed in 1965, a flood of Asian immigrants from countries like Vietnam, Cambodia, and other war-torn regions poured into the United States.

At least a handful of Asian Americans, understanding the black community's role in spurring the immigration discussion in the first place, began to support the country's ongoing fight for black rights. High-profile activists like Richard Aoki (a member of the early Black Panther movement, who also supplied the group with arms and was accused by some as being an FBI informant) and Yuri Kochiyama (a child of WWII Japanese internment camps who led anti-war and civil rights protests in the '60s alongside her friend Malcolm X) backed the Civil Rights movement any way they could, and the beginning of a future collaboration between black and Asian activists was born.

The Asian American community, like its black brethren, has also suffered plenty of severe racial injustices, although few incidents ever gained national recognition. There was Vincent Chin, a Chinese American factory worker allegedly killed by his white supervisors in 1982 and whose suspected murderers never faced charges for his death; 25-year-old Vietnamese immigrant Cau Bich Tran, who was shot by police in 2003 after officers claimed Tran had tried to throw a cleaver at them (it was later revealed that the "cleaver" was in fact a vegetable peeler); and there was Kuanchang Kao, a Chinese immigrant who was shot by police in 1997 after authorities alleged they had felt "threatened" by his "martial arts moves" (Kao was drunk at the time).

There are far too many stories to count. But it's that mutual empathy between Asian and black communities that, when healthy, fosters positive change and a movement too powerful to ignore.

Overarching stereotypes of Asians as "model students," docile servants, and humble but successful "hard workers" has affected Asian Americans in the same way that black Americans have suffered from stereotypical assumptions that they're the lazy, jobless, and unmotivated leeches on society — two completely unique forced-narratives that still share the same underlying assumption. Explains Truong,

The idea that Asians are these role models is precisely why black culture and the black struggle jive so deeply with Asian Americans. Black culture fills the hole that Asian stereotypes have ripped wide open. ... These two groups, along with every other minority group in America, have always struggled against the same evil: the white majority's refusal to accept the reality of these two incredibly nuanced and diverse groups. ... Knowing this, it's not hard to understand why the yellow peril supports black power.

Things haven't always been great between Asians and blacks (like during the 1992 L.A. Riots), but understanding the roots of the Civil Rights movement may allow Asian Americans to further bind themselves to the #BlackLivesMatter cause going forward. The white majority's past attempts at gentrifying the Asian American community (in the hopes of posting them up as an end-goal for other racial minorities) should motivate Asian Americans to peel off the stereotypes and put on their boxing gloves.