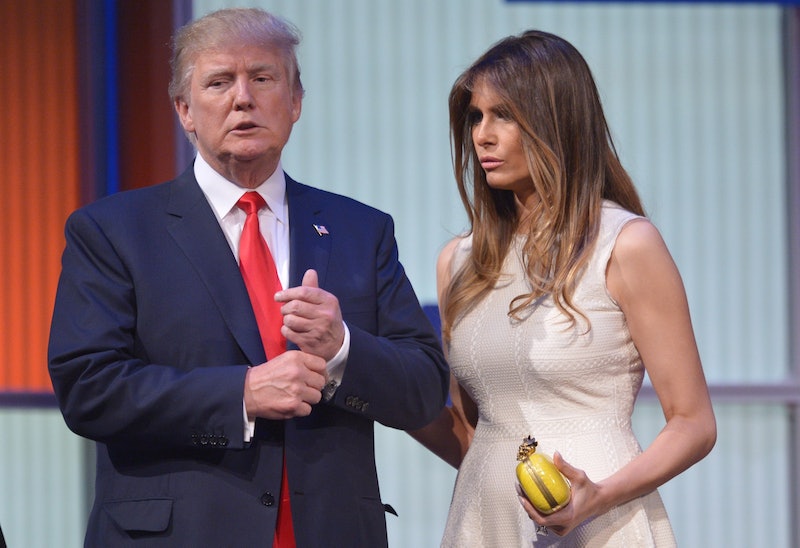 Look, we all know how controversial Donald Trump really is. He's essentially a giant megaphone in a $7,000 suit. Recently, The Donald has come under especially heavy fire for his glaring comments about Fox News anchor Megyn Kelly, which included calling her moderating skills at the first GOP primary debate "unprofessional" and possibly attributing her "ridiculous" commentary to her menstruating. Trump's blinding misogyny, however, isn't exactly a new development — a single quote from Trump's 1997 book Trump: The Art of the Comeback proves just how terrible his views on women have always been.

The biased anecdote in question actually stemmed from Trump's experience as a first-year owner at the Miss Universe pageant in 1997. At the time, Venezuela's Alicia Machado was the current Miss Universe, having won the global pageant the previous year, and was batting away criticisms over a sudden weight gain. Even "serious" news outlets like CNN felt the need to chime in on the 19-year-old's change in appearance.

"Expanding Miss Universe works to shed pounds," read CNN's headline. "When Alicia Machado of Venezuela was named Miss Universe nine months ago, no one could accuse her of being the size of the universe ... [but] since winning the crown, the former Miss Venezuela went from 118 pounds to — well — a number that kept growing like the size of the fish that got away."

If that's not hard-hitting journalism, I don't know what is! (To clarify, Machado was still pretty tiny, not that it even mattered to some reporters at the time.)

CNN, however, wasn't the only one making nasty side commentary. Trump later recalled in his book published the following year that he had tried to work with the beauty queen ("Ugh! Size 8 is just so big!"), but she had only been terrible to him in return. Here's Trump's account of what happened, in his own words:

The [1997 Miss Universe] pageant in Miami Beach, my first as owner, was a huge success. We’d sold out the house; it was a mob scene. From my position offstage, I was able to glance up to the greenroom occasionally. I could just see Alicia Machado, the current Miss Universe, sitting there plumply. God, what problems I had with this woman.

First, she wins. Second, she gains 50 pounds. Third, I urge the committee not to fire her. Fourth, I go to the gym with her, in a show of support. Final act: She trashes me in The Washington Post — after I stood by her the entire time. What’s wrong with this picture? Anyway, the best part about the evening was the knowledge that next year, she would no longer be Miss Universe.

How kind of him, to gallantly sweep in and save a woman from her own fat, then go to the gym with her to make sure she loses it. And in case you didn't already want to roll your eyes all the way back into your skull out of exasperation, remember that he also reportedly told radio host Howard Stern at the time that Machado was "an eating machine." Incredible.

At least these days Trump isn't attempting to hide just how sexist he really is. His own brashness and public refusal to be politically correct (or, interpreted from awful-person speak, "not offensive to others") has spoken loudly enough for him.