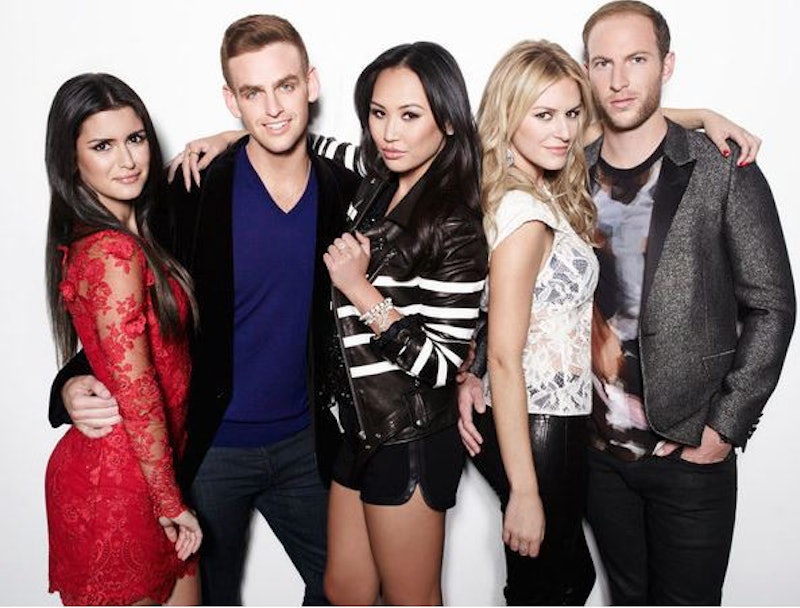 The press day for E!'s Rich Kids of Beverly Hills (based loosely off the Rich Kids of Instagram phenomenon) was held in a for sale property in Beverly Hills. The property features all white interiors, fire places a plenty, cathedral style ceilings and an entry way that looks like a modern-day moat, complete with large rectangular marble steps used to hop-scotch into the entry way. The home is a property of Brendan Fitzpatrick, one of the "rich kids" the E! reality show features. "You can see Kim and Kanye's backyard from here," Fitzpatrick said as we stepped outside, pointing over the pool to a house that's under construction. "And that's Chris Paul's," he said, moving his finger slightly to the left to point out the Clippers point guard's not-so-humble abode. "There's Avril Lavigne's place."

The Rich Kids of Beverly Hills, premiering Sunday, Jan. 19 on E! follows the lives of five friends (Dorothy Wang, Morgan Stewart, Roxy Sowlaty, Brendan Fitzpatrick and Jonny Drubel) who have known each other since childhood and have bonded over a common thread: They all have a shit ton of money. While some work hard for it, others don't work at all, and prefer to spend their time mastering the art of the perfect poolside selfie.

Brendan Fitzpatrick is the boyfriend of Morgan Stewart, one of three girls who star on the show. During our interview, the couple takes a break from chatting with press to walk across the room and kiss one another. "I couldn't see it any other way," Fitzpatrick said about starring on the show with his girlfriend. "It's great to do what we do naturally, and there's just a camera there. People seem to like it, and say how relatable our relationship is and desirable it is. I'm the most comfortable with her, out of anyone in my life."

But like many couples who allow their relationships to be captured for a worldwide audience, things don't always turn out so smoothly. "It asks for a lot of pillow talk at night, a little bit extra," Fitzpatrick said, admitting the couple did have some hesitations being on the show together. "But I looked at her and she looked at me and we said, 'Why not? We can handle this better than anyone.' Off camera, we are the exact same people. Everything happens for a reason, and this obviously was meant to be."

Morgan, who Fitzpatrick has known for years, agrees with her boyfriend's hesitations, but is more concerned about breaking the stereotype of a typical "rich kid" living in Beverly Hills. "I think the title of the show makes people have a different perception of us, you probably had a different opinion of us before today," she said. "You probably thought we were gonna be assholes. But we're really funny, smart, interesting and real. We're not defined by what we have or don't have."

But what they do have, is a lot. "I make jokes, like I wash my hair with Don Perignon," said Dorothy Wang, Stewart's best friend and one of the central figures on the show. "But it's like, I don't do that, it smells bad." She continued, "Before the show got started I had 13 or 14 thousand [Instagram followers], now I have 17 thousand. All of our Instagram followers are so excited. They said all they want for Christmas is for the 'hashtag' Rich Kids of Beverly Hills to premiere."

Wang and Stewart sat together on a plush white couch, eating a bit of every snack food that's set in front of them. "What is this, Six Flags?" Stewart said in sheer delight while biting into a piece of fried chicken sandwiched between two pieces of croissant.

"The show is fun, but it cuts into our shopping and browsing time," Wang complained. "Literally we used to go shopping all the time and now I don't even have time. My girl at Barney's was like 'I haven't seen you —' and I'm like 'I know!' I don't have the energy to shop. People are always like, 'How many Birkins do you have?' and I'm like 'I don't know!' We don't think about our money like that. I don't sit around all day counting how much money I have or how many Birkins I have." (However later in our chat, Wang gives the advice: "Every time you have the opportunity to buy a Birkin, you take it. You know what I mean?")

When asking the girls about the female-centric audience the show is sure to attract, they were convinced the reality program has qualities for both sexes. "We're pretty," Stewart said. "We are appealing to look at. Personally I have very boyish humor, I'm very... gross. I have a more masculine sense of humor than I do feminine so I think there's something for every sex." Wang adds: "We're entertaining universally."

Sunday's premiere ratings will determine how entertaining the fivesome really is, but you can catch the first full episode on Hulu now.