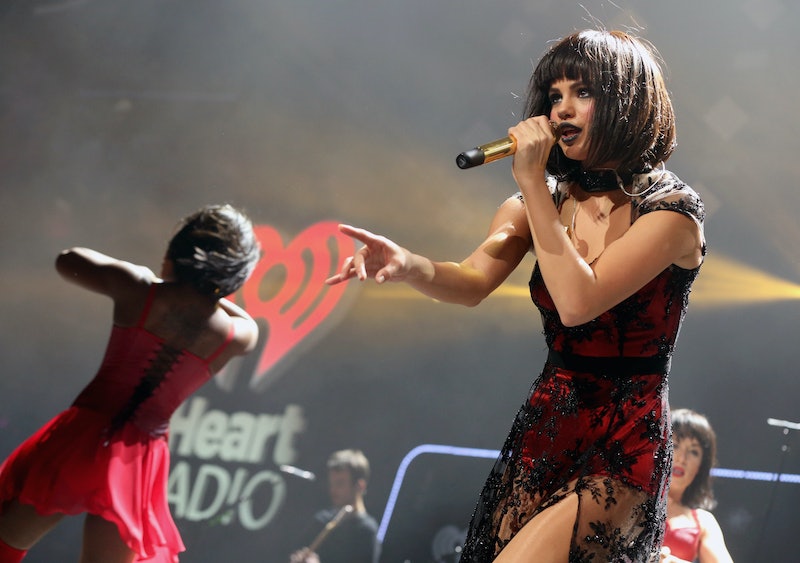 Last Friday night, I attended the KIIS-FM Jingle Ball concert in Los Angeles. I'm still recovering. The concert was four hours long. There were 11 acts. So much shrieking. Ryan Seacrest was there. Selena Gomez was there. Maria Menunous was there. The Mahomies were there. I spilled water all over myself trying to avoid the Enrique Iglesias balloons that were released from the stadium rafters. My ears have yet to pop. After the concert, I asked my boyfriend if he had a good time. His reponse: "It was a lot." It was a lot. But I would've been disappointed if it had been anything less. So yes, it was a success.

I went for the Miley Cyrus and the Ariana Grande, but I stayed for all of the strange, unexpected moments. Here are the highlights (and by "highlights" I mean "the moments I cherished the most") of the KIIS-FM Jingle Ball concert:

I like Selena Gomez a lot, but her set was so bizarre. She might've been lip synching (apparently, what we heard was her backup track), which, whatever. Lip synching happens. However, after one of her songs, the lights went down, the crowd went nuts, and then she yelled "WHAT THE FUCK" into the microphone. She didn't realize her mic was on. Everyone around me started murmuring nervously, but I couldn't stop cackling and throwing my arms up in the air. It was the best. When the lights came back up, she apologized for the "sound issues" and promised two more songs. Well, she only played one more song and then left the stage. All of it was beautiful. It was my favorite thing ever. To quote Kelly Clarkson: "Some people wait a lifetime for a moment like this." This was my "A Moment Like This" moment.

Dude. Jason Derulo is an incredible dancer. He had a group of male backup dancers and they too were incredible dancers. At one point, they danced to a remix of "Pony," and I had to sit down. The perfection overwhelmed me.

When Robin Thicke performed "Blurred Lines," I just figured we'd hear a recording of T.I.'s verse. Or we'd get an instrumental interlude. Or Thicke would just skip that part entirely. What I did not anticipate: Thicke welcoming SPECIAL GUEST T.I. TO THE STAGE. I wish someone had warned me. I think the lady sitting two seats down who whipped her head around and stared at me wishes someone had warned me, too. Because I shrieked like a rabbit caught in a storm drain.

I'm an unabashed Miley Cyrus fan, so I loved every minute of her set. Maybe I teared up a little bit during "Wrecking Ball," okay?! And maybe I freaked out when she started with "Party in the USA," okay? And maybe I HOWLED over her backup dancer/reindeer's wedgie, okay? Cyrus's three backup dancers/reindeer wore white, high-cut, not-thong leotards. Two of the three backup dancers/reindeer's butts stayed covered. One of the backup dancers/reindeer's butts did not. She had an intense wedgie throughout the entire performance. Her butt was OUT. And yes, I am an incredibly immature human who thinks butts are hilarious. I tried to not laugh about it, but the seven-year-old sitting next to me gasped, pointed, and covered his mouth. The dam broke and I erupted into a fit of giggles. You guys. Butts are hilarious.

The Jingle Ball sound issues were RAMPANT! Ariana Grande started her set with "Right There," but it was some Little Mermaid shit: She sang, but we couldn't hear her perfect voice. Her mic was down for an entire song. I was a wreck. An absolute wreck. I wanted to call Ryan Seacrest and give him a piece of my mind. Fortunately, the mic was fixed before her next song, and yes, the rest of the set was a dream. Once the mic was working, Grande said, "At least you know I'm not tracked!" I NEVER DOUBTED YOU, ARIANA! Some read into it and speculated the comment was a dig made at Gomez's expense, but Grande denied that theory immediately. It totally sounded like an offhand remark, not a thinly-veiled sick burn. Trust me. I was there. I know everything.

Macklemore wanted to get the audience amped up or something, so he was like, "be crazy so I can raise a glass of egg nog with my family this holiday season and tell them that this was the craziest crowd ever." Eh, I'm paraphrasing. I don't remember his exact words, but I do recall him saying "egg nog" one billion times. And now I can't stop thinking about egg nog. My brain is egg nog.

More like this
Selena Gomez Joked About Her Relationship Status In Her ‘SNL’ Monologue
By Grace Wehniainen
Selena Gomez Reacts To TikTok Users Who Say She Shaded Hailey Bieber
By Grace Wehniainen
Taylor Swift, Kerry Washington & More Speak Out On Uvalde Mass Shooting
By Jake Viswanath
Selena Gomez’s ‘SNL’ Hosting Debut Had Twitter Gushing Over ‘Barney’ & Wigs
By Stephanie Topacio Long
Get Even More From Bustle — Sign Up For The Newsletter