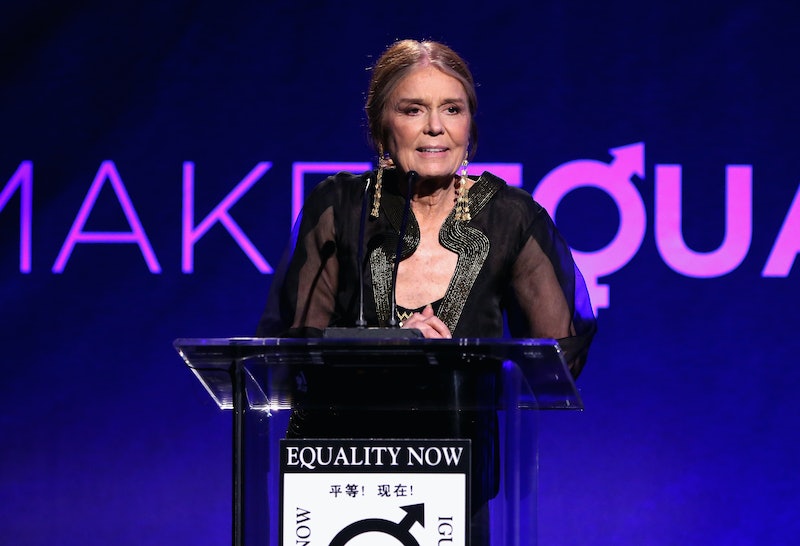 She's a feminist activist, author, co-founder of Ms. magazine, and all-around hero to women everywhere, and now she has another big achievement to add to the list. Gloria Steinem has been awarded a literary peace prize! The 2015 Richard C. Holbrooke Distinguished Achievement Award, by the Dayton Literary Peace Prize, recognizes writers of either fiction or nonfiction whose literary work has been instrumental in promoting peace and fostering a better understanding of the diverse, global community we all share. The prize, which was established in 2005, is the only international literary peace prize awarded to writers in the United States. Definitely standing-ovation-worthy.

Steinem is being honored for her entire body of literary work, which includes the bestsellers Revolution from Within: A Book of Self-Esteem — in which Steinem writes about how internal struggles with self-esteem relate to global change and revolution, and features examples of iconic revolutionaries, from Margaret Mead to Mahatma Gandhi; Outrageous Acts and Everyday Rebellions — a collection of Steinem's personal essays; and Moving Beyond Words — a collection of essays that challenge gender, racial, and cultural stereotypes, and offer a more radical framework for looking at the world.

Off the page, Steinem's seemingly endless achievements include helping to establish the Women’s Action Alliance, dedicated to nonsexist and multiracial children’s education; as well as playing a role in founding organizations like the Women’s Media Center, Voters for Choice — a pro-choice political action committee, the Ms. Foundation for Women, and everyone's elementary school favorite: Take Our Daughters to Work Day.

The Richard C. Holbrooke Distinguished Achievement Award, which will be presented to Steinem on November 1, at the 10th Annual Dayton Literary Peace Prize Gala, was established to recognize a writer's entire lifetime of work, and was named after American ambassador and former Peace Corps official Richard C. Holbrooke, who who helped negotiate the 1995 Dayton Peace Accords that ended the war in Bosnia. This year celebrates the 20th anniversary of that monumental peace agreement with a series of events being held in Dayton, Ohio, including the gala at which Steinem will be honored.

You just keep on getting 'em, girl.