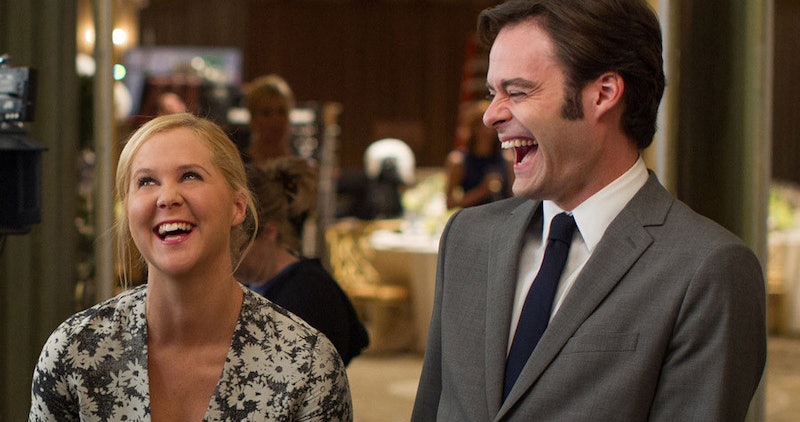 It's not often that Hollywood gets sex right in films. As a cinema lover, I know that it takes a great deal of talent and effort to make those best movie sex scenes look realistic instead of looking overly cheesy or generally absurd. Since Hollywood glamorizes everything, the more unsavory parts of sex are generally left out of films. Filmgoers don't get the see that awkward moment when partners butt heads, or those annoying few seconds where limbs and parts try and rearrange themselves into more comfortable positions. Generally in films, there is some kissing, heavy petting, and, finally, the big shebang.

So far this year, there have been several films that haven't backed away from the eroticism and realism of sex in their stories. Here are the seven best movie sex scenes of 2015 so far.

2. The Boy Next Door

Typically, the French are quite relaxed when it comes to depicting sex onscreen. This was not that case for Gaspar Noé's Love; the film got a strict rating from the French. It's essentially one long sex scene, which celebrates love and sex — in 3D. Though the film won't be available to view on Video on Demand in the States until the fall, this is probably a movie best watched in the comfort of your own home.

While The Overnight isn't particularity steamy, it is provocative, hilarious, and has ton of sex. OITNB's Taylor Schilling and Parks and Recreation alum Adam Scott star as a couple who moves to L.A. with their young son and meet another couple, who invite them to dinner. Though the evening starts off innocently enough, things get a lot more interesting and sexy as the night wears on. The best sex scene from The Overnight is in its opening sequence, because it's extremely realistic and awkward. You can watch if the NSFW clip for yourself here.

The Notebook will always be my favorite Nicholas Sparks adaptation, but The Longest Ride comes in pretty close. During the sex scene for the film, the couple moves from a room into the shower, and, if you've seen Scott Eastwood, you understand why this particular scene is amazing. Eastwood even admitted that he and his co-star Britt Robertson were completely naked while shooting the scene.

Though Trainwreck has several sex scenes, most of which are much more horrifying and hilarious than sensual, there is a fantastic moment with Amy Schumer's character Amy and Bill Hader's character Aaron. In the scene, the duo hook up in what first appears to be a drunken frenzy, but then turns out to be unexpectedly sexy.

Though Hollywood is making restrained steps toward normalizing the depiction of sex onscreen, we have a long way to go. Hopefully the rest of the year, and 2016 and beyond, will birth even better sex scenes on screen.

More like this
35 Sexy Texts To Send Your Partner
By Griffin Wynne and Carolyn Steber
15 Romantic Movies On Netflix That Are Perfect For Snuggling Up On The Couch
By Rachel Simon and Grace Wehniainen
13 Ideas To Add To Your Sex Bucket List
By Kristin Magaldi
15 Intriguing Movies On Netflix That Are Based On True Events
By Mary Kate McGrath, Shannon Barbour and Grace Wehniainen
Get Even More From Bustle — Sign Up For The Newsletter