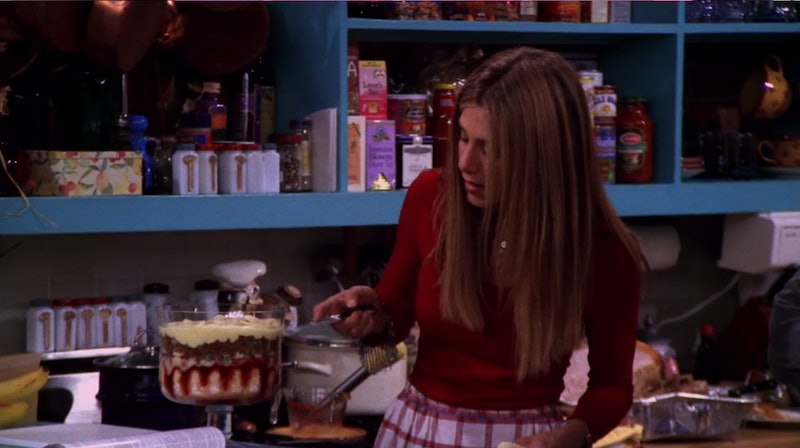 I think it has been established many times now that the Thanksgiving episodes of Friends are also the greatest episodes of Friends. Sure, you can argue that these episodes are of the Holiday variety, so they’re of the "go big or go home" mentality — but I think that it’s mostly because we get all the friends plus other characters shoved into the same room for a fantastical 22 minutes. However, it's worth wondering: Is there is one Thanksgiving episode that stands out among the rest? Turns out, there is: And, that glorious episode is Season 6's “The One Where Ross Got High.”

While Rachel’s horrifically hilarious beef trifle and the subsequent fallout steal the show, there are so many other amazing moments that make this episode one that you want to watch year round: There’s Monica giving Chandler an eleventh hour notice that her parents hate him and that they don’t know she and Chandler live together; there’s Joey and Ross desperately trying to escape to hang out and drink with a bunch of beautiful dancers; There’s Phoebe readily lusting after Ross and Monica’s father; And, there’s the whole problem which lends to the show’s title — the fact that college-aged Ross got high and blamed it on Chandler, thus sparking the ire of the Geller parents, in addition to causing Monica and Chandler to force Ross to confess in an effort remedy the situation.

Yeah. If you like happiness and laughter, I urge you to go re-watch for yourself.

But, first, if you somehow aren’t yet convinced, here are the eight moments that make it the best Friends episode:

Directly after he was informed that Jack Geller hates him:

Chandler: "Whoa! Snowing out there?"

2. When Rachel Breaks Down The Elements Of A "Traditional English Trifle"

Typically, beef sauteed with peas and onions is the flavor I go for at ice cream shops and bakeries.

3. When Ross & Joey Made A Horrifying Discovery

4. When Monica Is Forced To Take The Ceremonial First Bite Of The Trifle

But, especially because she "expertly" puts Joey's acting techniques to use and then throws them all under the bus so they'll have to try it, too.

5. ... And Then When Everyone Makes Up An Excuse To Eat It Elsewhere So They Don't Have To Actually Eat It

6. When Even Mr. Geller's Most Mundane Tasks, Like Drinking Condensed Milk, Arouse Phoebe

Note: This is all on account of the fact that she had steamy dream where he was a total stud. (You know, until she had a follow-up dream that he cheated. After that, her affections turned towards a nobler dream man, Jacques Cousteau.)

7. When Joey Actually Liked The Trifle, Thus Giving Us All An Everlasting Catchphrase

Well, that, and the fact that he ate everyone else's discarded dishes.

8. When The Resentful Tension Between Monica And Ross Came To A Head, And Everyone Said What Was On Their Minds

Phoebe and Joey for the win.

Considering that I've effectively won you over in favor of this gift that keeps on giving, I'll make your Netflix search shorter: It's Season 6, Episode 9. You're welcome.

More like this
The Banned 'Friends' Ad Shows Monica As You’ve Never Seen Her Before
By Sam Ramsden
Ozzie’s Coming Out Scene With Kitty On 'That ’90s Show' Has Twitter Sobbing
By Brad Witter
Ashton Kutcher Wants Danny Masterson “To Be Found Innocent” In Rape Retrial
By Jake Viswanath
'Abbott Elementary' Fans Probably Missed This 'Parent Trap' Easter Egg
By Sam Ramsden
Get Even More From Bustle — Sign Up For The Newsletter
From hair trends to relationship advice, our daily newsletter has everything you need to sound like a person who’s on TikTok, even if you aren’t.