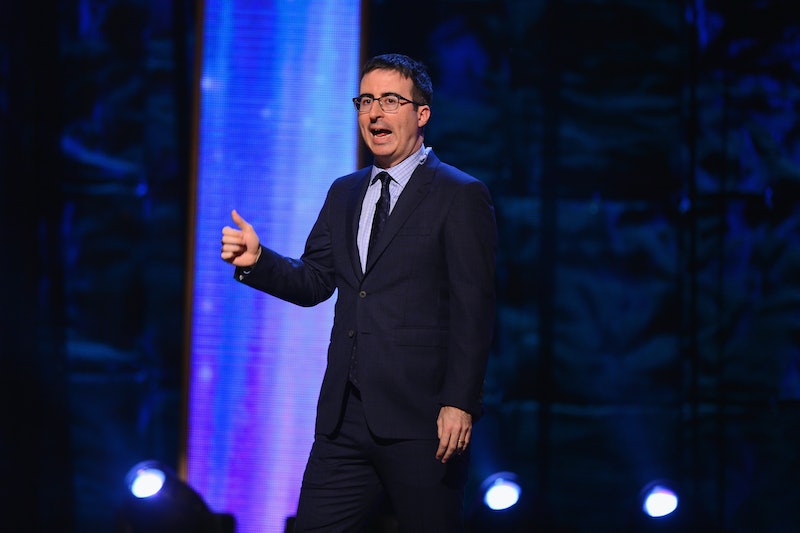 A little over a year into hosting Last Week Tonight, John Oliver has long shed his title as "that guy who occasionally appeared on The Daily Show." John Oliver is now a household name. Combining in-depth investigative journalism and his signature brand of British wit, Oliver covers topical stories like nobody else — not even Mr. Stewart himself. Very few comedians are able to achieve icon status so quickly, but for Oliver, it was an easy feat. He's just that funny, that sharp, that on point. And that means he has no shortage of sidesplitting jokes, but I've culled the very best John Oliver quotes from his first two seasons. I wish I could say, "You're welcome," but poring through his jokes was mainly for my own pleasure.

Not that I needed it, but taking a tour of the Last Week Tonight vault has reminded me that Oliver is a true original. He tackles serious topics with the acumen of a "real" journalist, but he incorporates such elements as mascots, fake blockbusters, and Michael Bolton, creating a style that's all his own. And while that signature style is ever present, you never know what you're going to get each time. Segments have ranged from deliriously silly (reenacting Supreme Court cases using real dogs with fake paws) to underrated, but relevant (exposing the flaws in U.S. infrastructure) to downright coup-like (interviewing Edward Snowden).

I wish I could come up with an analogy for Oliver as apt as his many brilliant comparisons, but I don't think any of mine would do him justice. But here's my contribution: John Oliver is like eating food and breathing air. He's my favorite thing and I need him. Anyway, I'll let the expert do the quipping. Here are 16 of John Oliver's best jokes from Last Week Tonight.

Drug companies are a bit like high school boyfriends. They're much more concerned with getting inside you than being effective once they're in there.

On Standardized Testing In The U.S.

A hundred and thirteen is a lot of tests. It's approaching the amount that you'd ask your doctor for the morning after you woke up from a one-night stand with Colin Farrell.

On The Country's Lack Of Paid Maternity Leave

Mothers — we owe everything to them. They gave birth to us, they nurtured us, they made us who we are. And this Mother's Day, we have just one thing to say to all the mothers out there: Get the fuck back to work.

On The Country's Crumbling Infrastructure

At this point, we aren't just flirting with disaster; we're rounding third base and asking if disaster has any condoms.

Payday loans are like the Lay's Potato Chips of finance. You can't have just one and they're terrible for you.

Think of our government as a body. The IRS is the anus. It's nobody's favorite part, but you need that thing working properly or everything goes to shit real quick.

Yes, it's that special time of year where we voluntarily imbibe pumpkin spice lattes, the coffee that tastes like a candle.

On Sex Ed And Consent

Because sex is like boxing, if one of the parties didn’t agree to participate, the other one is committing a crime.

Prison sentences are a lot like penises — if they're used correctly, even a short one can do the trick... is a rumor I have heard.

And if you're thinking, "But hold on John, what if I'm an asshole who couldn't give a shit about America's hungry families or the long-term viability of life on Earth?" Well, first, let me say, Mr. Trump, thank you so much for taking the time to watch this show tonight. It's lovely to have you with us.

On The Death Penalty

The death penalty is like the McRib. When you can't have it, it seems so tantalizing. But when they bring it back, you think, "Wow, this is ethically wrong."

When David Beckham got a tattoo of Jesus, the response from most soccer fans was, "That's huge for Jesus. That's a big deal for him."

But it's been 114 years. It's like for over a century, America's computer's been saying, "An update to your country is available" and we've been clicking "Remind me later" again and again and again.

Student debt is like HPV — if you go to college, you are most likely to get it, and it will follow you for the rest of your life.

Congress is like jazz — it’s really about the bills it’s not passing. It’s also like jazz in that most people hate it and anyone who says they don't are lying.

On The Tobacco Business

So it's an aging product that's decreasing in popularity and yet somehow it just can't stop making money. It's basically the agricultural equivalent of U2.