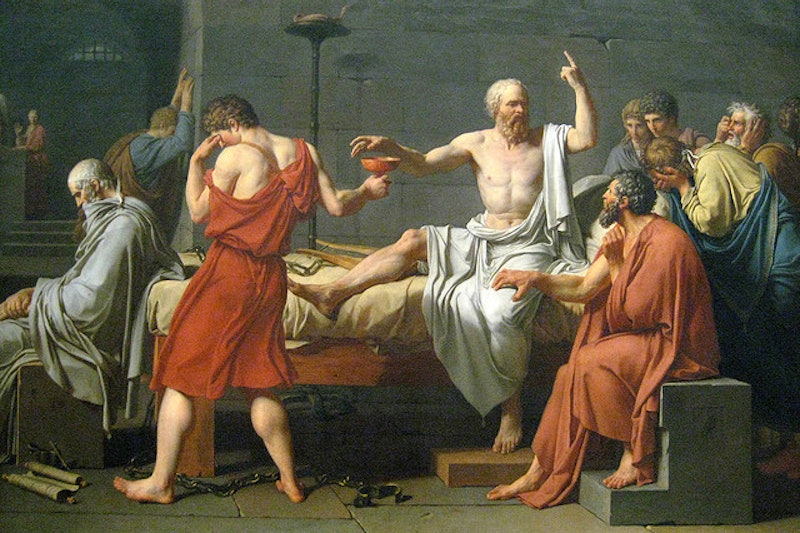 When it comes to depression, people often want answers. How can I get better? What should I do? Why is this happening? However, new evidence suggests that the answer for depression might not be an answer at all — in fact, it might be a question. New research has found that a technique called Socratic questioning as a treatment for depression might be worth pursuing, thanks to its ability to help patients think outside the box and view their situation from a different perspective.

Developed by Socrates in the second half of the 5th century BC, the Socratic method relied heavily on the use of questioning as a way to stimulate creative and critical thinking. This approach encouraged the identification and elimination of hypotheses surrounding a single point-of-view, allowing participants to find alternative options.

I'm firmly of the belief that any concept that lasts over a thousand years is usually worthy giving a listen to. Luckily, this is exactly what the researchers at Ohio State University decided to do. Working with 55 depressed patients over a 16-week period, the researchers set out to examine how cognitive therapy achieves positive effects for patients dealing with depression. The therapists involved in the study used the "Socratic questioning" approach to find that their patients saw substantial improvements with regards to their depressive symptoms.

"People with depression can get stuck in a negative way of thinking," explained Justin Braun, co-author of the study, in the press release. "Socratic questioning helps patients examine the validity of their negative thoughts and gain a broader, more realistic perspective."

Co-author Dan Strunk told Bustle that in a separate study, they also examined how effective these skills are for patients who use them on themselves. "The better the patients are at these skills and the more they use them in their own life, the lower their risk for relapse following a successful course of cognitive therapy," Strunk said.

Although there is no formula to the Socratic approach, Strunk advises people to first identity the specific thought that is associated with the upsetting feeling. To get a taste, I told Strunk that my mom is controlling my dating life and it is getting out of control. The specific thought here was "I feel that don't I have control over my life."

"Are there examples of where you have been able to exert control? Are there opportunities for you to exert control that you might have been overlooking?" he asked, using the art of Socratic questioning on me. "Sometimes you have to be creative in thinking of the right question to ask, but the line of questioning is all geared towards helping them to not buy into their initial thought as invariably true."

So maybe I do have control over my dating life and maybe my mom isn't so influential? Although to be honest, I'm not sure those statements would stand up to questioning.