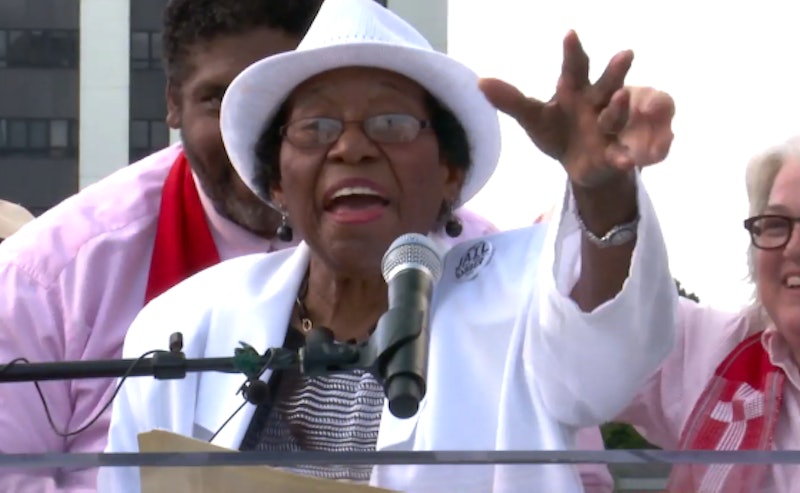 In response to The New York Times Magazine story on efforts to render the Voting Rights Act of 1965 ineffective earlier this month, President Obama wrote a letter to the editor advocating for the full restoration of voting rights for all Americans. Obama wrote: "Congress must restore the Voting Rights Act. Our state leaders and legislatures must make it easier — not harder — for more Americans to have their voices heard. Above all, we must exercise our right as citizens to vote, for the truth is that too often we disenfranchise ourselves." He also talked about an African American voting rights activist who inspires him and made his success story possible — who is Rosanell Eaton from Obama's letter?

Eaton, who was profiled in the magazine's original voting rights story, was one of the first black residents in her segregated North Carolina county to register to vote in 1939. Years before the Voting Rights Act was enacted, potential voters had to recite the preamble to the U.S. Constitution in order to register at the time, and Eaton was one of the first African-Americans in her area to pass the test. Today, at 94, she's fighting North Carolina's new voter restrictions that jeopardize many people of color's ability to vote in 2016, including hers.

In 2013, North Carolina Gov. Pat McCrory signed laws restricting voter registration, requiring voters in the state to show a voter ID, and cutting back early voting beginning in 2016. Because the name on Eaton's birth certificate is different from the name on her voter registration card and driver's license, she might not qualify for the necessary voter ID, rendering her unable to vote nearly 80 years after she overcame the state's restrictive literacy test. Before the bill was signed, Eaton fought the restrictions, saying to a crowd of protesters in 2013: "We need more, not less, public access to the ballot. ... At the age of 92, I am fed up and fired up."

Unfortunately her initial activism didn't work, and now Eaton and the NAACP are suing the state to repeal the 2013 bill that would disproportionately affect minorities. The NAACP's complaint says that the laws "will cause the denial, dilution, and abridgement of African Americans' fundamental right to vote."

According to Eaton's daughter, Armenta, she has always fought for civil rights and was a civil rights worker. President Obama commended Eaton's long fight for equal voting rights in his letter, writing: "Rosanell is now 94 years old. She has not given up. She’s still marching. She’s still fighting to make real the promise of America. She still believes that We the People have the awesome power to make our union more perfect. And if we join her, we, too, can reaffirm the fundamental truth of the words Rosanell recited."