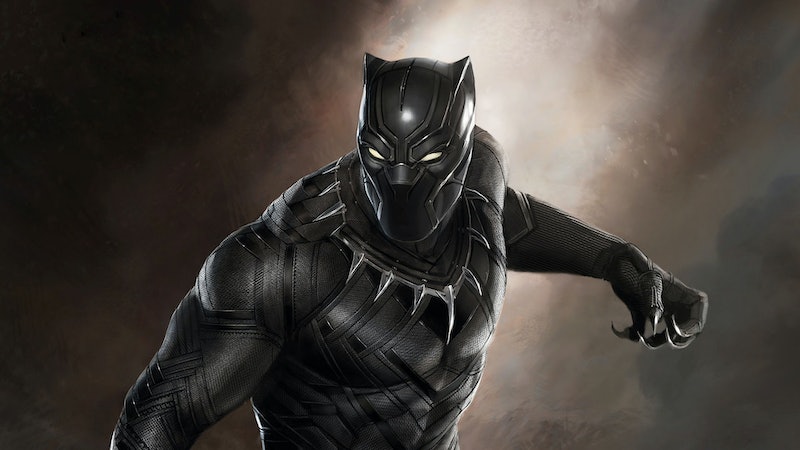 I don't know about you, but the number of superheroes of color in the MCU is disappointingly low — and the number of superheroes of color with their own movies is completely nonexistent. Sadly, there's no solo movie about the Falcon yet on the horizon, but fans like myself have the upcoming Black Panther movie starring Chadwick Boseman to look forward to. But, before we get a chance to pop over to Wakanda and join a whole new cast of characters, the superhero will be appearing in Captain America: Civil War with just about every single superhero in the MCU except the Hulk and Thor. For those who can't wait, there are some on-set photos of Black Panther making the rounds on the Internet, and he looks amazing.

Sadly, that's not exactly Boseman in the costume. According to The Daily Beast, that's actually a stuntman getting ready to do some death-defying moves that will make Black Panther come across on screen as the certifiable badass that he is. However, the costume looks every bit as good as it did in the official movie poster, and even more sleek and amazing than it did in the comic books, and I'm already excited to see T'Challa finally join the MCU.

But those set photos also leave me with quite a few unanswered questions, both as a fan and as a casual observer.

I like to believe they're going to become friends by the end of the movie if they aren't already, but who knows what the MCU has in store for these two? Are they actually friends, or do they just have an icy respect for each other? Does T'Challa think Steve should stay in his lane? Is he totally over Captain America? What's going on there?

Black Panther is depicted doing stunts with the Winter Soldier aka Bucky Barnes. Does that mean he and Bucky are friends? Are they enemies? Is Bucky after him? Is he after Bucky? WHAT GOES ON THERE?

The last time we saw Bucky Barnes was back in Captain America: The Winter Soldier, where he saved Steve's life and then abandoned him to go and figure out who this "Bucky" person was. Does Bucky's appearance here mean he's got his memories back? Are we going to see the WWII bad boys back together once more, with both of them actually remembering the history between them? (Please, please, please?)

4. Does T'Challa Attack Them?

5. Why Are They On A Building?

Are they going to destroy that building? Properties don't usually stay standing or, like, not on fire whenever a superhero gets involved...

T'Challa's helmet with the cat ears is officially my favorite thing ever, and I think I could totally pull it off. I mean, I wouldn't walk around in a ski mask lest someone think I am off to rob a bank, but a ski mask with cat ears? Either I'm a nerd, or I'm the cutest future bank robber ever.

I need that Black Panther movie like I need air, especially if this is how awesome he looks in it. Join me in trying to psychically make his movie release date come faster.