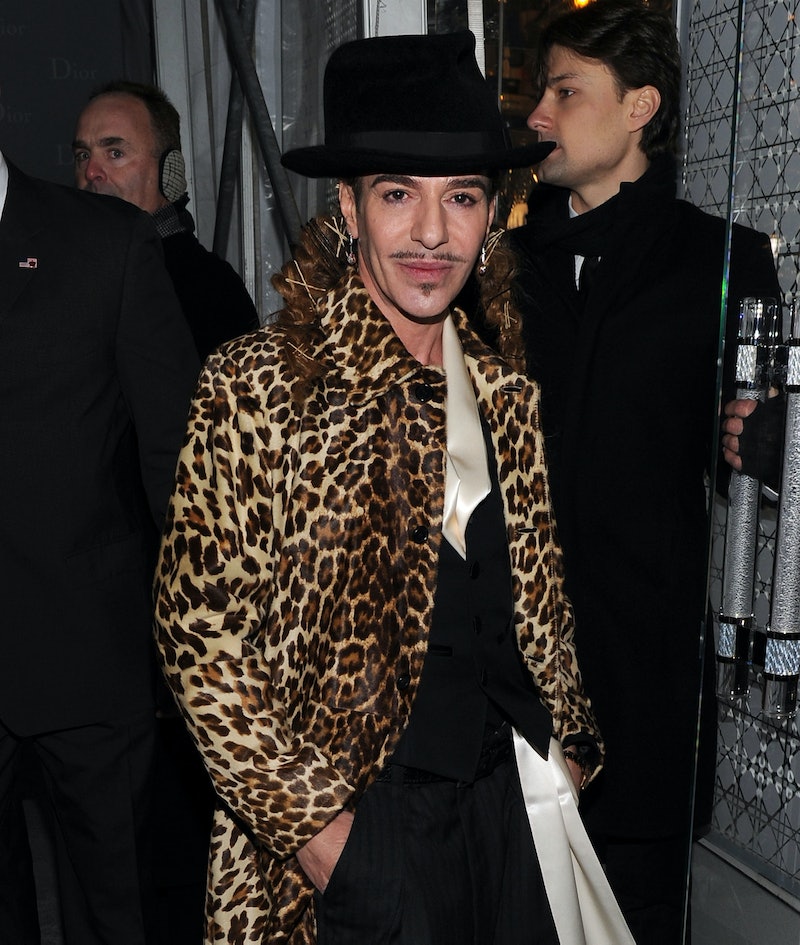 It was just two years ago that John Galliano was one of the most prominent names in fashion. As the creative director of Christian Dior for nearly two decades, as well as the head of his eponymous label, it seemed the world—or at least Fashion Week—was his to conquer. But after an anti-Semitic rant in a Marasais bar, the mighty fell with a thunderous crash. Seemingly overnight, the 52-year-old designer lost everything. After two years of silence, Galliano has decided to tell his side of the story in an interview with Vanity Fair 's Ingrid Sischy, set to appear in the magazine's July issue.

The piece currently online is only an excerpt of a much larger article, but it covers how out of touch with reality Galliano had become at the time of his outburst. He says, "I lived in a bubble. I would be backstage and there would be a queue of five people to help me. One person would have a cigarette for me. The next person would have the lighter. I did not know how to use the A.T.M.” He goes on to say that, had he continued on the path he was on, he would have ended up in an insane asylum or dead.

Speaking about the outburst that forever changed his life, Galliano says, "It's the worst thing I have ever said in my life, but I didn't mean it." He claims to not remember having made his anti-Semitic tirade, and says that the first time he saw the now viral video of his rant, he threw up. It's a moving anecdote, but you have to wonder: Does it suffice as an explanation, or is it merely an excuse? After all, addiction is undeniably real and horrible, but does it excuse real and horrible racism?

So, now the fashion world is faced with a decision about whether or not to forgive Galliano. He already has some major players on his side, including Kate Moss, Linda Evangelista, and, perhaps most notably, Anna Wintour. In February, The Times reported that Wintour called upon deeply respected designer Oscar de la Renta to take in Galliano and have him help with de la Renta’s fall 2013 line. It is worth noting that Wintour is the artistic director for Condé Nast, overseeing content for all of the magazine publishing house's publications, including Vanity Fair. Also on Team Galliano is Jonathan Newhouse, the chairman of Condé Nast International, who has approached rabbis and the Anti-Defamation League on Galliano's behalf. After speaking with Galliano, Sischy seems to think he is worthy of being forgiven, telling WWD , "Your stomach kind of tells you [when someone isn't genuine]. My stomach was saying, ‘This is the real thing.'" But not everyone is so ready and willing to forgive. Last month Parsons The New School for Design cancelled a three-day class that Galliano was set to teach after a petition circulated around the university with over 7,000 signatures from students against the Galliano teaching.

The fashion world is notoriously filled with big egos and even bigger hissy fits. Still, there seems a clear distinction between, say, the 2008 temper tantrum former Vogue Editor-at-Large Andé Leon Talley displayed when a waiter splashed him with champagne and Galliano's crude and offensive burst. According to New York Magazine, Talley shouted, "Look what you've done! I've got to wear these clothes all day!" It's rude and unnecessary, but it pales in comparison to Galliano's now-infamous statement of, "I love Hitler. People like you would be gassed."

To forgive Galliano would send a strong message from the fashion industry, but is it really the message they want to convey? One interview does not equate to remorse, especially when that interview comes from a publisher where Wintour, one of Galliano's biggest advocates, oversees all content as artistic director. That is not to say that Galliano should be shunned forever. In a sympathetic statement, Abraham Foxman from the Anti-Defamation League says, "We believe that individuals can change their hearts and minds as long as they demonstrate true contrition. Mr. Galliano has worked arduously in changing his world view." Regardless of whether or not this is an accurate assessment of Galliano's road to recovery, the fashion industry should proceed with caution. Yes, people can change, but that is not a fast or easy process. Galliano needs to prove that he is continuing to better himself if he wants to return to the fashion industry as the powerhouse he once was, and he needs to do so outside of the glossy pages of a major magazine.