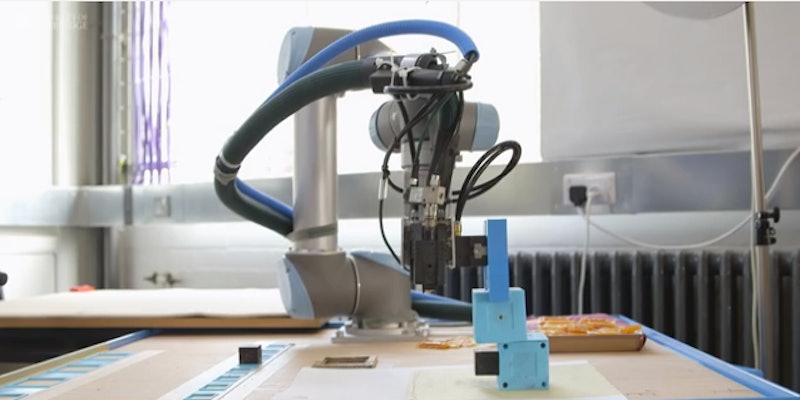 Sometimes it feels like they want the robot takeover to happen. For the sake of technological advancement (is that really worth it?), scientists have developed a robot that makes other robots. As if that weren't a terrifying enough concept, the so-called "mother" robot's "babies" can then evolve and improve with each generation, passing down their best traits, just like humans do. While this is certainly an exciting breakthrough in the field of robotics, the line between Roomba and an army of autonomous, menacing robots is blurring a little too close for comfort.

In the experiment, which was conducted by the University of Cambridge and ETH Zurich, the mother robot (essentially a big mechanical arm) designed and built a generation of 10 baby robots (tiny motor-powered cubes) and then observed their speed and mobility. The ones that traveled the fastest and farthest got to live; the weaker links were scrapped. (Did you expect the robot race to be anything but cold and cruel?) Learning from the shortcomings of the first generation, the mother bot would then design the next ones with improved motor skills. It's the robotic equivalent of natural selection, which weeds out weaker genes in living organisms.

Fumiya Iida of the University of Cambridge's Department of Engineering, the lead researcher on the project, tried (and failed) to make this spine-chilling situation sound less terrifying in a statement:

The experiment was groundbreaking for evolutionary robotics (a methodology that uses Darwinian principles to create autonomous robots) on two fronts: it proved that robots could feasibly be far better at building themselves than humans, and it's paving the way for a new generation of robots which can adapt to certain situations on the spot. In terms of practical applications, autonomous, adaptable robots could help in all areas, from manufacturing to agriculture, by detecting flaws in machines and fixing them automatically without human intervention.

Iida, again, tries to reassure us that this won't lead to the apocalypse:

It’s still a long way to go before we’ll have robots that look, act and think like us. But what we do have are a lot of enabling technologies that will help us import some aspects of biology to the engineering world.

Uh-huh. If you're as wary as I am, let me put this whole evolutionary robotics thing in more comforting terms: Imagine a future Roomba doing a routine sweep of your floor. It comes across a spill and, while a current Roomba might either go through or around it, this new, adaptable Roomba will automatically turn into a super-slick mopping machine, Transformers-style. OK, I guess I can accept this kind of future.

More like this
Why TikTok Is Flooded With Controversial Videos About "Pick Me Girls"
By Courtney Young
On TikTok, "Cbat" Has Been Named The Worst Sex Song Ever
By Lexi Inks
Here's How To Get Your iPhone To Update Automatically Forever
By Emma Carey
Why Everyone Is "Soft Tagging" Friends On Instagram Right Now
By Alexis Morillo
Get Even More From Bustle — Sign Up For The Newsletter