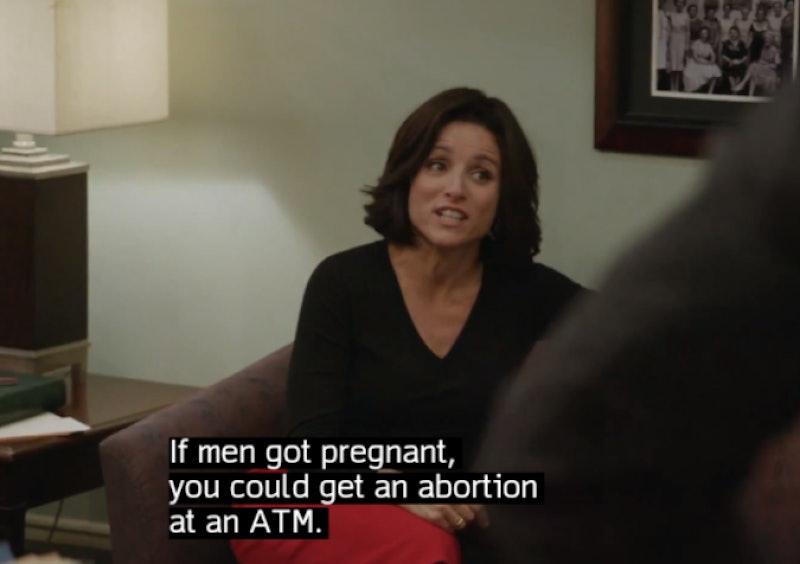 When it comes to a topic as serious and contentious as abortion, sometimes all we can do is laugh at the never-ending debate. Of course, abortion itself should never be taken lightly or discussed in jest. But the many, often absurd, arguments made by anti-choicers can certainly use a little mocking. Thankfully, the Internet provides the perfect outlet for such derision, and we don't even have to write our own material. There is a veritable treasure trove of hilarious and on-point pro-choice memes online that do the job for you, and with brilliant wit, no less. So in these tense social and political times, go ahead and laugh.

Amid the ongoing controversy surrounding Planned Parenthood and the covert videos that came out as part of a smear campaign against it, pro-lifers are jumping into the conversation to reemphasize their arguments. Their claims are nothing you haven't heard before — abortion is murder because life begins at conception (the crux of the pro-life argument), adoption is a better choice (so are you going to adopt some unwanted kids?), abortion clinics profit off of selling fetal tissue on the organ black market (just, no), etc. These are classic anti-choice beliefs, and they are often misinformed and hypocritical.

Because the Internet doesn't let anyone get away with anything, these arguments have already been refuted by countless memes. Check out these 16 hilarious, biting pro-choice memes that might be even more effective than your standard, earnest arguments.

Arguing Pro-Life When You're Pro-Guns Makes No Sense

This Is So True

Thanks For Leaving Us With Options!

Good To Know You Have Our Backs

So Glad Congress Has Its Priorities Straight

This Might Not Be A Meme, But It's An Important Message Nonetheless

More like this
Sandra Bullock, Girlboss Extraordinaire
By Matt Harkins & Viviana Olen
How To Support Gun Control Reform Right Now
By Morgan Brinlee and Carolyn Steber
The Church Of Scotland Votes To Allow Same-Sex Marriages
By Sam Ramsden
Photos Of Boris Johnson Drinking At A Downing Street Lockdown Party Have Surfaced
By Bustle UK
Get Even More From Bustle — Sign Up For The Newsletter