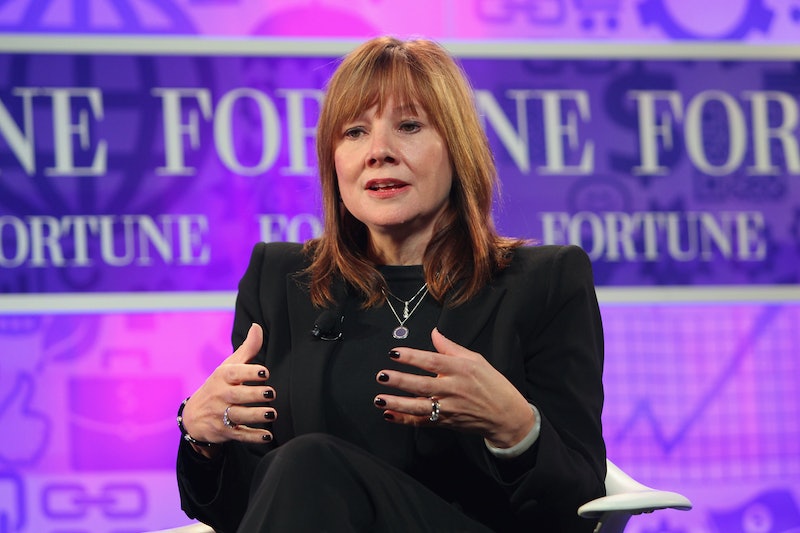 Watch your head, because we can feel the glass crumbling: Mary Barra, 51, executive vice president of General Motor's global product development, is going to become the next GM CEO. Not only does this make Barra the first female CEO of General Motors, but also the world's first-ever female CEO in the auto industry. Starting Jan. 15, 2014, Barra will succeed current CEO Dan Akerson, 65, and become the head of an auto empire worth $56.8 billion.

The formal search for GM's new CEO began a few weeks ago. Akerson has been in the position for merely 3 years — since Sept. 1, 2010 — but his wife has cancer, and he's now stepping down. Despite his short time, Akerson's CEO-ship was no easy task considering the U.S. government had to bail out the company for $11 billion. (We're still hung up on the fact that the Rosie the Riveter factory was closed.)

Barra beat out three other candidates for the position, all men: Steve Girsky, 51; Dan Ammann, 41; and Mark Reuss, 50. Of those three, Ammann will be the only one moving up the ranks with Barra, settling into the role of GM President.

Barra's story with GM is a touching one. Born to a father who was a die maker in the auto industry, Barra began attending Kettering University in 1980 to study electrical engineering. She started working at GM to help pay for tuition.

After graduating Kettering University, Barra took on a GM fellowship in 1988, which she followed up with a master's degree in Business Administration at the Stanford Graduate School of Business. After that, Barra joined GM for good.

Here, Barra discusses her experience at GM as one of the company's few women.

While Barra has had extensive experience working in the auto industry, the two past GM CEOs, strangely, have not. Erik Gordon, a professor at the University of Michigan's Ross School of Business, noted in the Washington Post: “There’s nobody with more years of honest ‘car-guy’ credentials than she has. She started off as a little-girl car guy. She became a big-girl car guy and how she’s a woman car guy. She’s the one to do the breakthrough.

Barra's been featured in Latina Magazine's "50 Latinas Who Rock Fortune 500 Companies" and is ranked #35 on Forbes' 2013 list of World's 100 Most Powerful Women.

Other leading women had this to say about Barra's upcoming appointment.