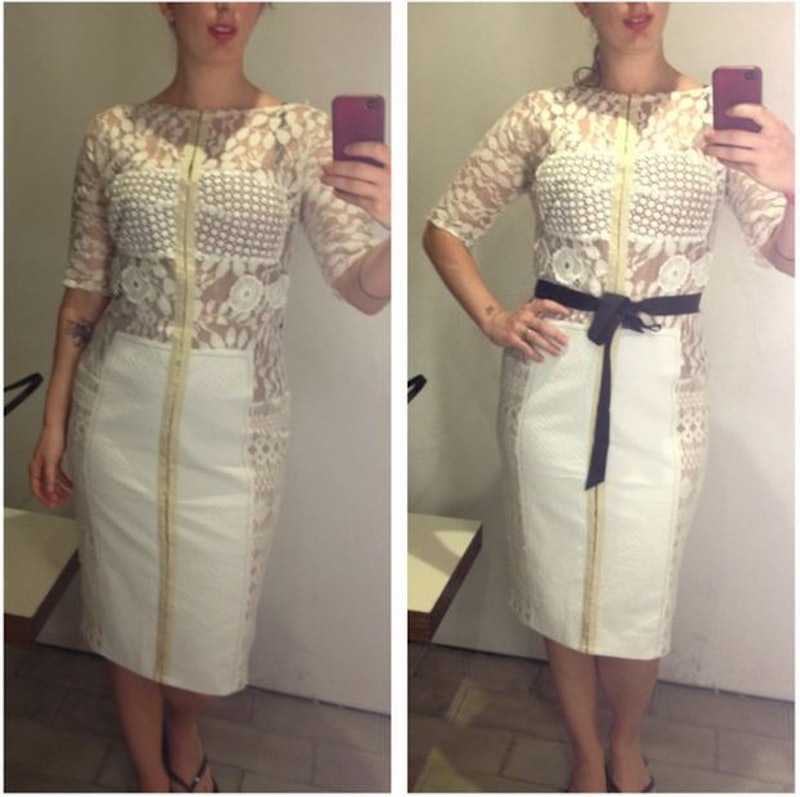 LBDs aside, retail is, for the most part, all about turn-around. Trends storm in, take over store windows and Instagram feeds, and go out just as quickly, spending their final days on the sale rack before disappearing forever. Even handbags get a seasonal update, with new colors and trim introduced to even the most iconic silhouettes. So the Carissima Sheath by Byron Lars, an Anthropologie exclusive that has been available, unchanged and at full price, for over two years (and counting) is definitely an anomaly.

To state the obvious, the dress, which is available in black, navy and ivory, is gorgeous. It’s lacy. It’s the perfect length. There are lines and seams in all the right places, and it’s sheer and sexy, but still mother-in-law-approved.

And this isn't just my opinion. The Carissima Sheath has taken up residence on Anthro’s “Customer Favorites” page, and garnered 108 reviews in round 1 of sales before the original product page became inactive and was relisted at a different URL where it received another 171 reviews. (Most other “Favorites” are only reviewed 10-20 times.) Even more impressive? 157 out of 171 reviewers recommend the dress. That's an approval rating of almost 92 percent.

I first spotted the dress in ivory at the Anthropologie on Newbury Street in Boston in 2013, where I tried it on and immediately felt as though I was enveloped in a gossamer embrace from a thousand angels.

At the time, with a big summer trip to Europe coming up on my calendar, dropping $258 on the dress wasn’t doable. Plus, I thought to myself, knowing Anthropologie, it will be on sale sooner or later, and I'll snag it then. (Not to brag, but I once bought a dress at Anthro for literally $8, on sale from over $100.) Well, Black Fridays, Christmases, and Labor Days have come and gone and the dress still has not been discounted.

It’s been 106 weeks since I first tried on the dress and Instagrammed it, pictured above, asking my friends on social media if it looked better with or without the black belt that comes with it. Notice, if you will, that my selfie was taken with an iPhone 4. That's how old this photo is in tech years.

The dress actually first appeared well before my own humble selfie; a version of it, which has since been adapted for the Beguile by Byron Lars capsule collection at Anthropologie, was worn by a model in Byron Lars' SS13 collection, which was presented during fashion week in New York almost three years ago.

It first made it's very first dressing room selfie debut, on plus-size model Adriana LeBaron, nearly a year later, and it's still popping up across social media today, with well-documented evidence that the dress literally looks good, in any of it's three color choices, on women of all body types, skin tones and hair colors.

Even celebrities, like actress Salli Richardson Whitfield of Stitchers and Being Mary Jane, Brea Bee of Silver Linings Playbook, and Jessica St. Clair of USA's Playing House, are fans of the Carissima; both have worn the dress for red carpet appearances.

And St. Clair looks chic in the black version:

Actress Yvette Nicole Brown is literally beaming in her Carissima:

Jazz singer Jessi Teich loved hers so much she wore her's twice, once to perform and once on the red carpet!

Here's a mash-up of more celebs wearing the dress from as far back as 2013, as shared by Lars on his Instagram page:

In an era of fast-fashion and even, dare I say, disposable fashion, it seems that Byron Lars and Anthropologie have stumbled upon a rare immortal silhouette that has stood the test of time and retail.

Anthropologie didn't respond to my request for comment via phone, email or twitter, but I had a chance to ask designer Byron Lars, who has dressed style icons like Michelle Obama and Kim Kardashian, what he thinks gives this particular dress such staying power.

"Although it doesn't give the impression that it would be, it is a very forgiving style that looks good on a wide range of different body types," he tells me. "I guess it's because it's appropriately sexy while also being more versatile than one might think at first glance. Put a jacket or cardigan over it and it goes to the office; take the jacket or cardy off and you're set for almost any dressy occasion — even your wedding, if you happen to have the white version, as evidenced in social media."

That said, the designer acknowledges that Carissima’s super-long shelf-life came as a surprise to him. “Never in my wildest dreams would I have imagined a single dress I designed to have had such (full-price) retail longevity!”

Although this dress is an Anthro exclusive, the original, a more expensive version of the same silhouette, was available in Lars’ main line, Byron Lars Beauty Mark. It followed a more typical retail path: It was available for one season, and then retired — or in this case, was adapted for the Beguile line. “The more affordable Anthropologie version however (by far) surpassed all of our expectations by a long shot!” Lars says.

Unlike the typical retail route — here today, on sale tomorrow — the dress is standing the test of time, and even though its anything but basic, it's a must-have staple.

And so, nearly three years later, Lars' Carissima sheath is breaking all of the retail rules. Like an It-Bag, the more it appears on Instagram, celebrities, and on TV, the more desirable it becomes. And, personally, I think Carissima has more than proven itself; it's time for this dress to get out of my dreams and into my closet.

Want more enduring style? Check out the video below, and be sure to subscribe to Bustle’s YouTube page for more hacks and tricks!

More like this
Everything You Need To Know About Gucci’s Signature Diana Bag
By Alyssa Lapid
Aerie’s Curve-Hugging Offline Leggings Will Give You A BBL In Seconds
By Bella Gerard
Spring 2023's Hottest Shoe Trends Include Moto Boots, UGG Minis, & More
By Allie Fasanella
12 Red-Hot Valentine's Day Outfits Perfect For The Holiday Of Love
By Dominique Norman and Kelsey Stiegman
Get Even More From Bustle — Sign Up For The Newsletter
From hair trends to relationship advice, our daily newsletter has everything you need to sound like a person who’s on TikTok, even if you aren’t.