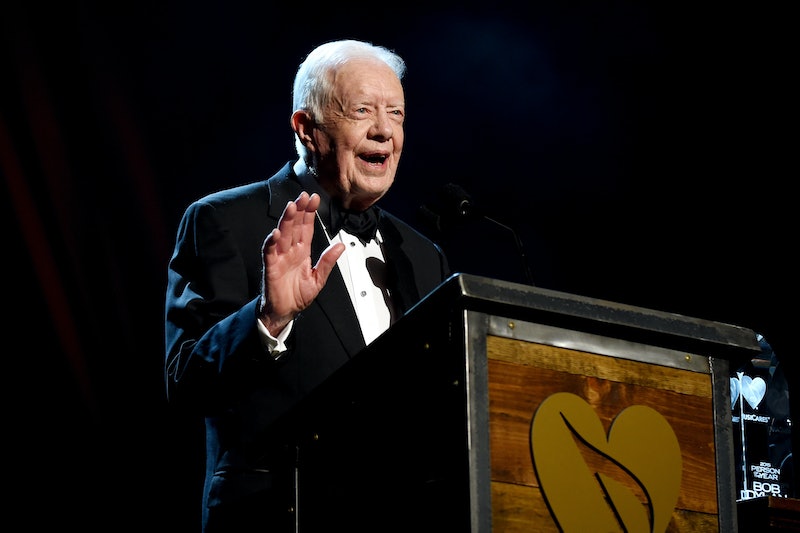 Since leaving the White House in 1981, former President Jimmy Carter has dedicated himself to advocating for gender equality and an end to violence against women and girls. In February, he told CNN: "This is going to be the highest priority for the rest of my life." He even wrote a book about it that came out last year: A Call to Action: Women, Religion, Violence, and Power. As a longtime advocate for gender equality, Carter has some inspiring quotes about women's rights, and they just might make him your new favorite feminist (or at the very least, your new favorite feminist former president).

Carter, 90, won a Nobel Peace Prize in 2002 for his "decades of untiring effort to find peaceful solutions to international conflicts, to advance democracy and human rights, and to promote economic and social development." While president, he refused to ignore human rights issues in South Korea, Iran, Argentina, South Africa, and Rhodesia (now Zimbabwe), and stopped the U.S.'s support of President Somoza, the abusive leader of Nicaragua. After leaving office, he continued his human rights work, but shifted his focus to women.

In A Call to Action, Carter compares the current gender inequalities across the world to racism in the U.S. South when he was growing up. He wrote:

There is a similar system of discrimination, extending far beyond a small geographical region to the entire globe; it touches every nation, perpetuating and expanding the trafficking in human slaves, body mutilation, and even legitimized murder on a massive scale. This system is based on the presumption that men and boys are superior to women and girls, and it is supported by some male religious leaders who distort the Holy Bible, the Koran, and other sacred texts to perpetuate their claim that females are, in some basic ways, inferior to them, unqualified to serve God on equal terms.

On Women Being Inferior Before God

Also in his book, Carter wrote:

Yet although economic disparity is a great and growing problem, I have become convinced that the most serious and unaddressed worldwide challenge is the deprivation and abuse of women and girls, largely caused by a false interpretation of carefully selected religious texts and a growing tolerance of violence and warfare, unfortunately following the example set during my lifetime by the United States.

On Leaving The Southern Baptist Church

In a 2009 article titled "Losing My Religion For Equality," he wrote:

So my decision to sever my ties with the Southern Baptist Convention, after six decades, was painful and difficult. It was, however, an unavoidable decision when the convention's leaders, quoting a few carefully selected Bible verses and claiming that Eve was created second to Adam and was responsible for original sin, ordained that women must be "subservient" to their husbands and prohibited from serving as deacons, pastors or chaplains in the military service.

On Discrimination Hurting Everyone

In the same article, he explained that gender discrimination isn't just a women's issue, saying:

The same discriminatory thinking lies behind the continuing gender gap in pay and why there are still so few women in office in the West. The root of this prejudice lies deep in our histories, but its impact is felt every day. It is not women and girls alone who suffer. It damages all of us. The evidence shows that investing in women and girls delivers major benefits for society.

In a 2013 op-ed on Social Europe about the abuse of women, Carter said:

The abuse of women and girls is the most pervasive and unaddressed human rights violation on earth. Women’s inequality has profoundly affected our world.

On Men's Role In Gender Equality

During a TED Talk on the mistreatment of women in May, Carter outlined some of the reasons women and girls are treated poorly across the world, and said:

There's one more basic cause that I need not mention, and that is that in general, men don't give a damn.

On Women In The Military

In 1980 Carter proposed that women be included in the military draft, which was obviously very controversial. At the time, he said:

My decision to register women confirms what is already obvious throughout our society - that women are now providing all types of skills in every profession. The military should be no exception.