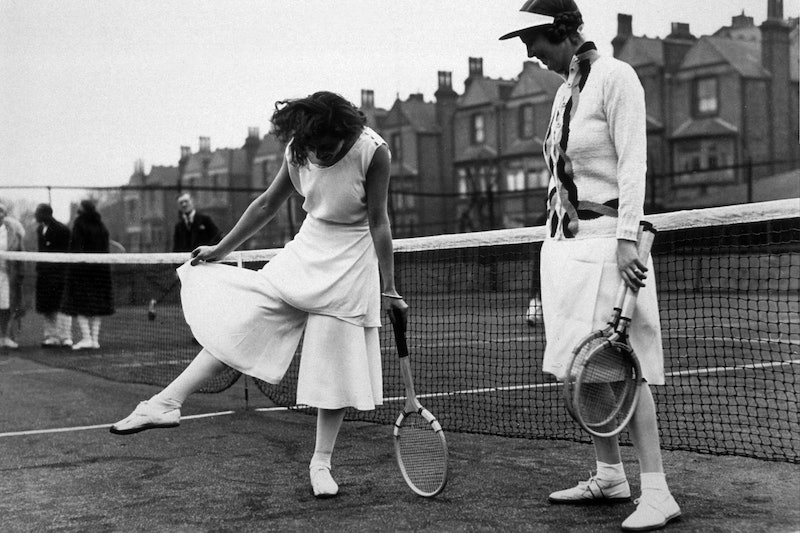 What are culottes and where on earth did they come from? Over the past few years, they've become about the coolest pants trend ever, but the history of culottes goes way back before those spandex versions we wore in the '90s. Recently, I found myself just staring at a pair one day, wondering how exactly we should classify this quirky piece of fashion art. Are they shorts, pants, a skirt, or all of the above? Or are they none of those things at all? Precisely. Culottes are 100 percent their very own thing.

These peculiar pant-like bottoms made their debut in the early 1900s, but they have stood the course of time by making an appearance in just about every decade since then, as demonstrated below. While we first saw a glimpse in the 1920s, culottes weren't an actual fashion statement until 1931, when women basically decided to be boss ladies and try their hand in sports. Feminism at it's finest, am I right? According to The Guardian, these trousers were "initially known as 'split' or 'divided skirts'." Seriously, could they get any less original? Somewhere along the line, they better became known as culottes. I haven't decided if that sounds like a fancy foreign drink or a disease the New York transit system carries. Regardless, I like it. And it fits these funky trousers.

As you contemplate adding a couple pairs of culottes to your closet, take a peek back at their history.

According to Vogue , designer Elsa Schiaparelli "created the revolutionary divided skirt, a forerunner of shorts, which was worn by Lili de Alvarez at Wimbledon in 1931 and shocked the tennis world," essentially bringing culottes to the world.

Ladies strolling through the streets loving their culottes! Two-piece outfits were popular in this decade because there was a rationing on fabric due to the war. Women could mix and match their culottes with other tops and have multiple outfits to choose from.

Claire McCardell, fashion designer, sports the spunky pants. Although this particular pair may not have been her own design, McCardell created "clothes that a woman could adapt to her body in all sorts of ways," according to the New York Times. Culottes included.

These culottes were featured in Harper's Bazaar in 1966. They were the work of designer, Anne Fogarty.

Bianca Jagger, a human rights advocate and actress, in a culottes jumpsuit sometimes in the '70s.

This is a pattern from 1982 for the girls who wanted to create their own culottes.

This was a standard look in the '90s. Gotta love the culotte jumpsuit!

Now, we find ourselves well into the new millennium where culottes are still all the rage. Here's how some of our favorite stylish celebs are rocking the look.

Come on, you know you want a pair too.