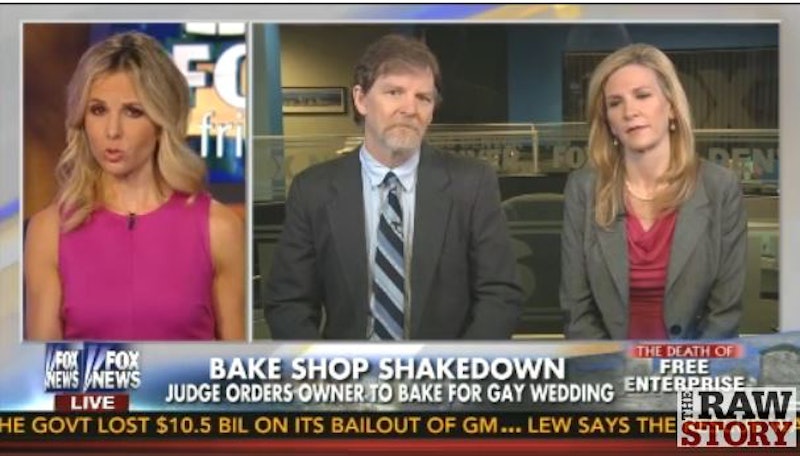 It's only Tuesday, but I think we've found our scumbag of the week: A bigoted baker from Colorado who is fighting for his right to deny cakes to gay couples. “I believe that’s what God’s designed for me to do,” Masterpiece Cakeshop owner Jack Phillips told Fox & Friends host Elisabeth Hasselbeck on Tuesday morning.

Last week, Phillips was ordered by a judge to "cease and desist from discriminating" against LGBT couples, after refusing to sell a wedding cake to a gay couple in 2012. Phillips said doing so would violate his personal religious beliefs, since he's morally opposed to same-sex marriage. Now that the judge has ruled against Phillips, he can't pull those kinds of discriminatory shenanigans in the future without facing fines. But Phillips told Hasselbeck he would rather go to jail than sell wedding cakes to gay couples.

Hasselbeck, of course, supports Phillips. The Fox & Friends segment was replete with hyperbolic screen titles such as "Death of Free Enterprise," "Bake Shop Shakedown" and "So Much For Freedom." But while religious freedom is serious business, so are equal rights regardless of race, gender, and sexual orientation. Imagine someone doing the same thing Phillips is doing based on a customer's race, skin color or ethnicity — "Jesus told me not to serve Hispanics" certainly wouldn't garner the same sort of support on national television. Yet discriminating based on sexual orientation is still seen as a legit move by certain segments of conservatives.

"At first blush, it may seem reasonable that a private business should be able to refuse service to anyone it chooses," the judge said in his written order. "This view, however, fails to take into account the cost to society and the hurt caused to persons who are denied service simply because of who they are."

If you're in business in the United States, you shouldn't be able to choose what classes of people you will or will not do business with. You have the right to not go into business, to choose a profession that will allow you to never deal with whomever it is you don't want to deal with; you don't have the option to go into business and then discriminate based on basic, immutable things — or you shouldn't have that option, anyway. Though federal law protects against discrimination based on race, national origin, age, sex, religion, and disability, laws prohibiting discrimination based on sexual orientation are still being decided on a state by state basis. A similar case to Phillips' is pending in Washington state, where a florist is accused of refusing to sell flowers to a same-sex couple; and the New Mexico Supreme Court ruled in August that photographer could not decline to take pictures of a same-sex commitment ceremony.