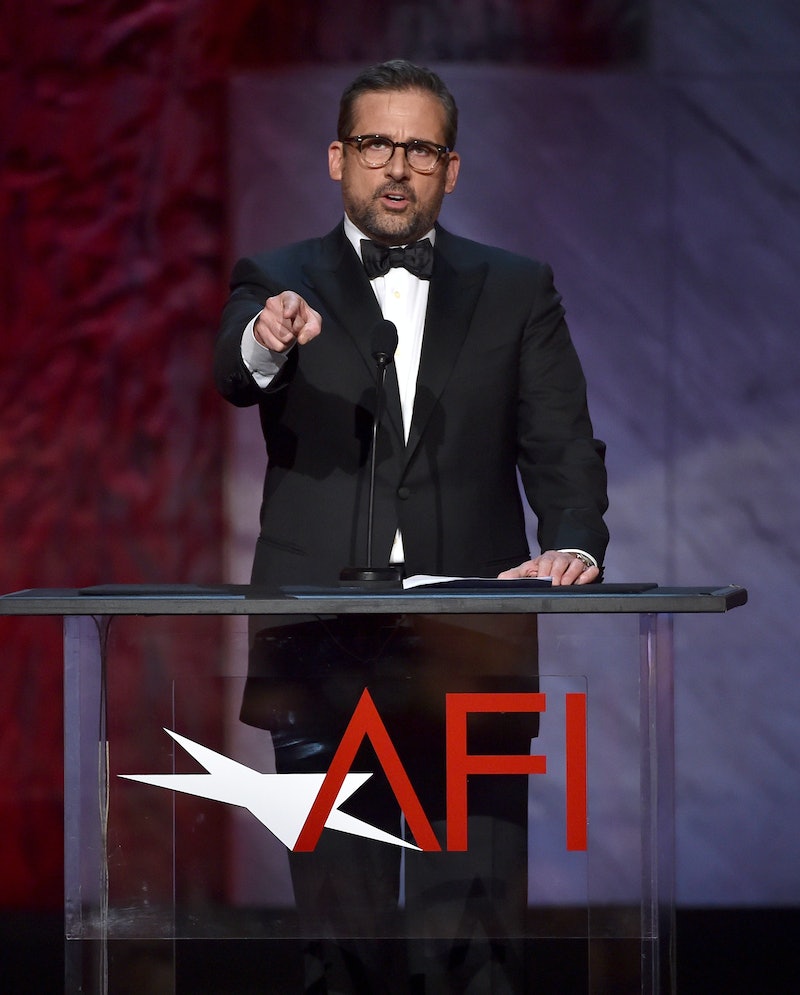 Ten years ago, Steve Carell awkwardly marched his way into our hearts and made us laugh. In 2005, he began his role as Michael Scott in The Office on NBC and, later in the summer, he starred in the Judd Apatow sex comedy The 40-Year-Old Virgin . As the movie turns a decade old, I'd like to point out there are a ton of people I forgot were in The 40- Year-Old Virgin — from Carell's Office co-stars, the usual Apatow castmates, and even the comedian's wife has a cameo. It's truly a star-studded movie.

The movie was a huge hit when it was released, boasting several quotable lines ("Kelly Clarkson!") and an 85% "Fresh" rating on Rotten Tomatoes. The American Film Institute named The 40-Year-Old Virgin as one of its top movies of 2005. Carell co-wrote the flick with Apatow, centering it on lovable Andy (played by Carell), who reveals himself to be, well, a 40-year-old virgin. His co-workers and friends at the electronics store he works at decide to help him get deflowered. Hilarity definitely ensues. It would be a story that would launch Carell and Apatow to super stardom. In 2005, Carell told IGN about his daughter's reaction to the movie's billboards: "I was driving around with my daughter who is four and she kept asking me, 'Why are you on the signs? You look stupid.'"

But The 40 Year Old Virgin also features many other famous faces. Check out the ones you may have forgotten.

The never-seeming-to-age star of Ant Man and many other Apatow films played David, one of Andy's friends. He obsesses over his ex-girlfriend, Amy.

The future star of The Office and The Mindy Project played Amy, the ex-girlfriend of David.

Before the comedian started churning out tons of comedies a year, Hart played an obnoxious customer at the electronics store Andy worked at. He gets into a fight with one of the characters.

Hill makes a cameo in the film as a customer at a store, where he buys some sparkly boots with goldfish on the bottom..

Rogan played Andy's friend Cal, who gives him advice about how to talk to women. The actor would breakout as a star in his own Apatow film, Knocked Up, in 2007.

The comedian played a father at a health clinic getting advice about birth control for his child. He also co-starred with Carell in Anchorman.

Carell's Office co-star had an uncredited cameo as a woman in a bar.

Before they were co-workers on The Office, Smith played mother to Carell's Andy in a cameo.

Yup, that's Carell's wife, who is an actress and an alumna of Saturday Night Live. She played counselor leading the birth control talk at the health clinic.

More like this
Revisit 1992’s 'A League Of Their Own Cast' Photos After The New TV Series
By Grace Wehniainen
‘Stranger Things’ Stan Megan Thee Stallion Grilled Natalia Dyer About Nancy & Steve
By Brad Witter
17 Years Ago, 'Hannah Montana' Reportedly Almost Cast This 'Gossip Girl' Star
By Grace Wehniainen
Netflix Reveals First Look At Wednesday In The 'Addams Family' Spinoff Series
By Bustle Editors
Get Even More From Bustle — Sign Up For The Newsletter