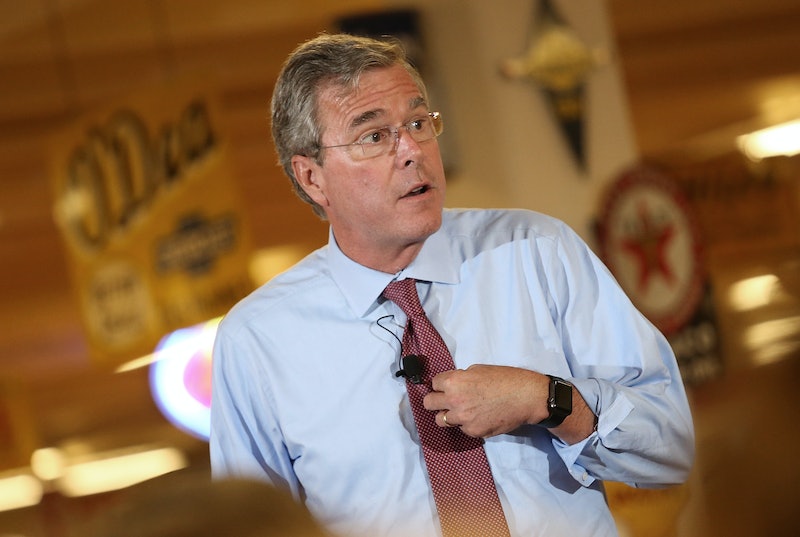 Politicians aren't known for being especially funny. However, they are easy to make fun of, so they often get invited to appear on late night talk shows. Since signing off from The Colbert Report in December, Stephen Colbert has had months to prepare for his new Late Show, curating a comedic collection of celebrity guests and bits. Because Colbert is nothing without ridiculous politicians to point at, he had to find a truly premiere-worthy candidate to appear when the show debuts on Sept. 8. So, to potentially rack up some laughs and votes, Jeb Bush will appear on Stephen Colbert's Late Show premiere.

The comedian announced his political guest with a tweet Tuesday that said, ".@JebBush will be on #LSSC Sept. 8! My first GOP candidate! Luckily I do 200 shows a year, so I think I can fit them all." Bush replied, "Only if you have at least two of us on each show. Looking forward to joining your first #LSSC next month!"

Bush certainly has been making it easy for comedic pundits throughout the 2016 GOP race, or really throughout his entire career. He's made a lot of ridiculous statements that are so out there that it sounds like he's trying to become a sarcastic analyst himself. To celebrate the new Late Show with Stephen Colbert, here are seven Jeb Bush quotes that sound like they could be jokes but really aren't funny at all:

I’m a skeptic. I’m not a scientist. I think the science has been politicized.

When acting in his conservative persona on his last show, Colbert would make fun of climate change science. However, there's nothing funny about Bush's real comment.

It’s time to strive for a society where there’s equality of opportunity, not equality of results. So I’m going to answer your question by saying: probably nothing.

Bush made this statement when asked what he would do to help African-Americans. It could be part of a variety show sketch about government ineffectiveness.

Immigrants are more fertile, and they love families and they have more intact families, and they bring a younger population.

Does Bush really believe that the act of coming to a new country increases fertility? Or is he trying to nab a spot on Saturday Night Live? We'll likely never know.

Bush called gay marriage a "distraction" in the 2012 race. He might as well have said foreign policy or job creation were distractions. Unfortunately, he was serious.

If you want to know who I listen to for advice, it’s [George W. Bush].

Bush admitted to this when asked whose wisdom he would seek in regard to Israel. Really? Him? Could this have been very subtle sarcasm?

My dad is the greatest man alive. If anyone disagrees we'll go outside.

This sounds like a caricature of a Bush son. At least here, I think he's actually somewhat joking.

Although I don’t know, given what I believe and how I believe it, I’m not sure I would have been successful as a candidate, either. These are different times than just six years ago, when I last ran, or even longer than that.

Bush reflected on his missed opportunity to run in 2012 on CBS This Morning. Is he roasting himself? I'm not sure what has changed in four years to make us stop laughing now.