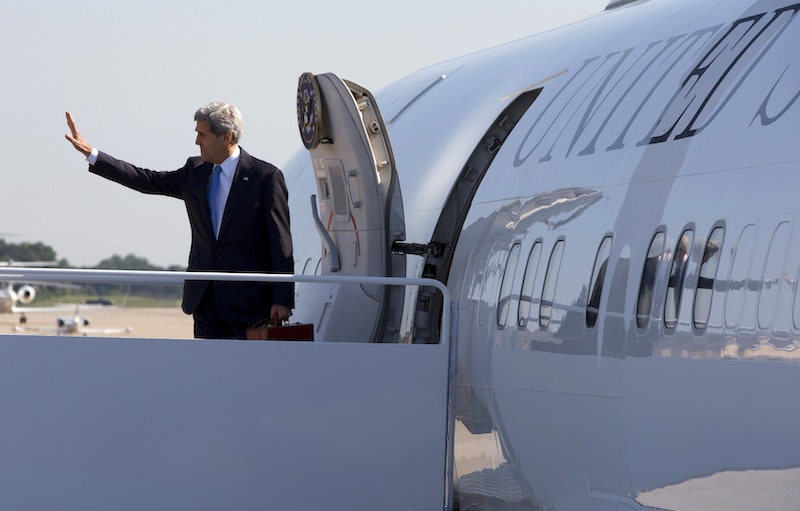 Secretary of State John Kerry will arrive in Israel Wednesday evening to push for progress on Israeli-Palestinian peace talks...again. This will be his fifth visit to the region in the past three months; signaling his focus on directing negotiations in the region.

At a press conference in Kuwait on Wednesday, Kerry said he wants to see progress with negotiations before the United Nations General Assembly resumes its debate over the Middle East in September.

The possibility of progress, of course, depends on whether leaders from both the Israeli and Palestinian sides are willing to make compromises. Palestinian President Mahmoud Abbas's position has long been that settlement activity cease before peace talks resume; despite appeals on the part of the U.S. and Israel for negotiations without preconditions.

A senior cabinet minister from Netanyahu's Likud party told Haaretz Wednesday that Israeli Prime Minister Benjamin Netanyahu "understands that for a peace agreement, it will be necessary to withdraw from more than 90 percent of the West Bank and evacuate more than a few settlements," and that he would be willing to do so...so long as his security demands were met. The statements are raising concern for those on Israel's Right, which fears means Netanyahu will betray Israeli settlers, and perhaps even his own party, in order to achieve a historic agreement with the Palestinians.

But a New York Times editorial from last May suggests that most Israelis may be less eager to see peace talks resume than Americans. The editorial suggests Israelis have "moved on," and claims that despite Kerry's renewed peace efforts, few Israelis "even talk about the Palestinians or the Arab world on their borders," and believe "the problem is both insoluble for now and less significant than the world thinks."

It is indeed problematic that countries outside the conflict seem to have a stronger desire for progress on peace talks than Israel does. The motivation for the U.S. and the UK, in particular, has now become economic after Kerry and British Prime Minister Tony Blair announced an unprecedented $4 billion investment plan in the West Bank at the World Economic Forum in Jordan last May.