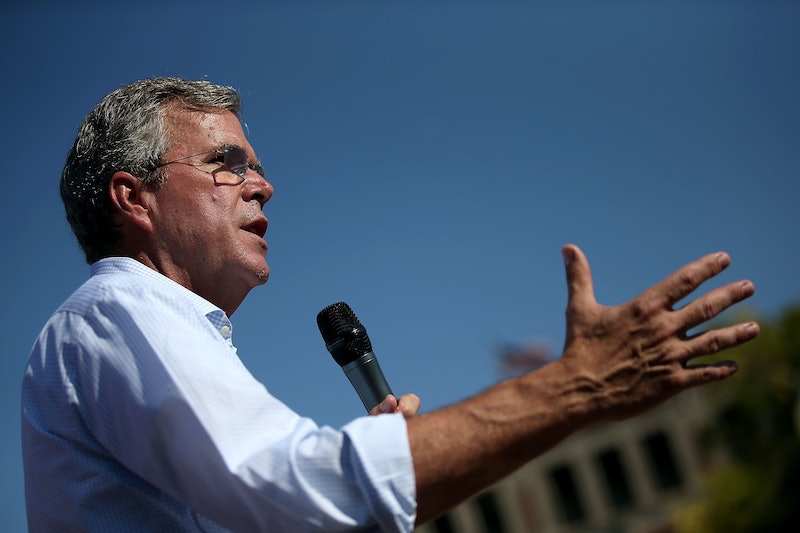 The way language can worm its way into our national dialogue is a curious thing. The constant communication of the Internet creates new jargon and slang, whether expressed through a Tumblr post or a hashtag. The newest trending word, "cuckservative," is a way to criticize Republicans who aren't as conservative as other members of the party would like.

The origin of the second part of the word is easy to decipher: "conservative." The first part of the word could be a reference to the notorious cuckoo bird, which puts its own eggs into the nests of other birds for them to take care of. It could also be a reference to a "cuckold," an offensive term for a man with an adulterous wife, which serve as a way to try to emasculate the target of the name. As a whole, the word refers to a deceptive Republican who isn't as toughly in line with the core Party platform.

The word has been trending through social media as a way to pinpoint which Republican presidential candidates do not really hold the typical conservative values. A cousin of the Republican In Name Only (RINO) jab that was more popular a few years ago, cuckservative seems to be most used to describe Republicans who do not fall in line with their party on many social issues, in particular.

The biggest target of this name seems to be Jeb Bush. Bush falls in line with most of the central Republican issues. However, platform points such as immigration make him vulnerable to being called a cuckservative. Bush supports a clear path to citizenship, not the giant wall over the border that many of his competitors have suggested. Because he falls more in line with Democrats on this particular issue, other Republicans utilize the name to undermine him.

This might just seem like the work of people who think they're clever on social media, but it's actually a symbol of a larger problem. One of the most valuable tools in a politician's arsenal is compromise. His or her ability to work with colleagues from the opposing party is the best way to get the most work done and to keep from wasting time.

The cuckservative attacks punish politicians who are willing to stand for what they think is right, as opposed to what members of their party traditionally agree with. A two-party system inevitably leads to squabbling and ineffectiveness, but Republicans and Democrats will get the most done if they work together and ease their allegiances a little. Trying to insult one another's manhood and problem-solving abilities doesn't help anyone.