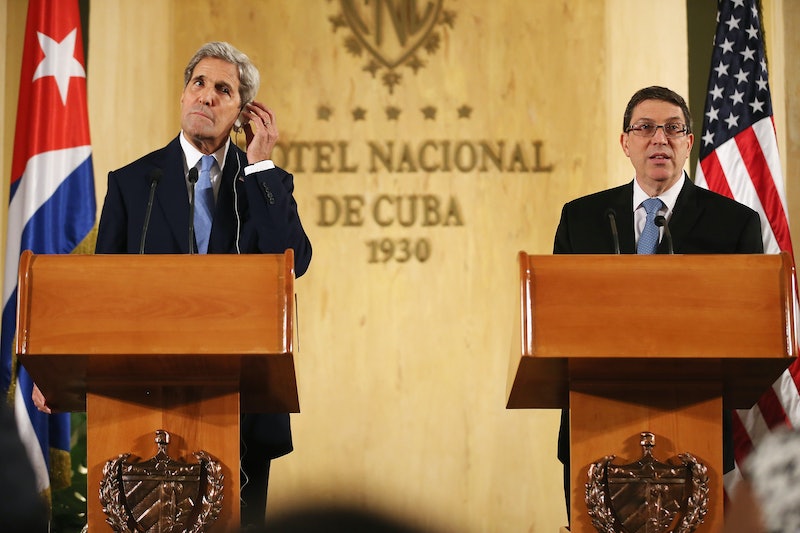 Last Friday, the United States reopened its embassy in Cuba for the first time since closing 54 years ago, prompting U.S. Secretary of State John Kerry to describe the occasion as "a truly historic moment." Kerry is the first American secretary of state to visit Cuba in more than 70 years, and he presided over a ceremony in Havana during which the same U.S. Marines who brought the American flag down in 1961 raised it over the embassy again. After the United States ended its diplomatic relationship with Cuba that year, the relationship between the two countries has been riddled with stalemates, secret talks, and various forms of negotiations. While Kerry's remark about the reopening of the American embassy being historic is true, a look at a timeline of U.S.-Cuba relations indicates that Obama is not the first president to try to make peace.

The United States has maintained an economic embargo against Cuba since 1960, something that former Cuban leader Fidel Castro did not fail to point out when Cuba reopened its embassy in Washington last month. But the relationship between the two countries extends back a lot further than that, and it is important to understand this history in order to fully understand how we arrived at the reopening of the U.S. embassy in Cuba.

1898: The United States declares war on Spain and wins. Spain cedes Cuba to America under the Treaty of Paris.

1902: Cuba becomes independent with Tomás Estrada Palma as its first president, but remains under U.S. protection as per the Platt Amendment.

1909: A rebellion led by Jose Miguel Gomez leads to his presidency following U.S.-supervised elections, but his administration quickly grows corrupt.

1912: American forces return to Cuba to help put down protests against the discrimination of black people.

1934: The United States does away with the Platt Amendment, giving up its right to intervene in Cuba's internal affairs. America also revises Cuba's sugar quota, and changes tariffs to favor the Caribbean island.

1959: In the Cuban Revolution, Castro becomes Cuba's prime minister after leading a guerrilla army into Havana that forces Batista to flee. In April, Castro makes an unofficial visit to Washington, where he meets Vice President Richard Nixon. Following this visit, Nixon expresses a need to guide Castro in the "right direction."

1960: Cuba nationalizes all American businesses in the country without providing compensation, and the United States imposes an economic embargo in response to Castro's reforms.

1961: Washington ends diplomatic relations with Havana. The United States then proceeds to secretly support Cuban exiles' failed invasion of the Bay of Pigs, after which more than 1,000 exiles are taken prisoner in Cuba. Castro sets out on a path to ally a communist Cuba with the U.S.S.R. Meanwhile, the CIA begins drawing up plans under Operation Mongoose to assassinate Castro.

1962: A highly significant event of the Cold War takes place in the form of the Cuban Missile Crisis. Castro fears a U.S. invasion, which leads him to let the U.S.S.R. deploy nuclear missiles from Cuba. When the United States gets wind of this and releases photos of the Soviet nuclear missile silos in Cuba, the U.S.S.R. and the United States come close to a nuclear war, which is only resolved when the two superpowers make a pact to remove their missiles from Cuba and Turkey respectively. In February of this year, the Kennedy administration implements a complete embargo of Cuba that also restricts travel and trade.

1965: Castro announces that Cubans wishing to go to the United States can do so through the Port of Camarioca. This leads to an establishment of an air bridge between Varadero and Miami — known as "Freedom Flights" in the United States — that lasts until 1973.

1966: Congress approves the Cuban Adjustment Act, which lets Cubans become permanent residents of the United States and pursue citizenship a year after they've fled from Cuba.

1980: After Cuba's economy suffers from a spike in oil prices and a continued U.S. embargo, Castro consents to the establishment of the Mariel boatlift, which leads 125,266 Cubans — many of them released convicts — to emigrate to Florida.

1982: The U.S. Department of State adds Cuba to its list of states sponsoring international terrorism.

1984: More than 2,700 Cubans from the Mariel boatlift are permitted to return to Cuba after the country signs a wide-ranging immigration agreement with the United States. Havana suspends this agreement the following year.

1993: The United States tightens its embargo on Cuba, while the Cuban government legalizes a dual currency system by permitting the simultaneous use by Cuban citizens of the U.S. dollar and the Cuban peso.

1996: Cuba shoots down two U.S. aircraft operated by Cuban exiles in Miami, after which the U.S. trade embargo is made permanent. This year also sees the passing of the Helms-Burton Act, whereby the America tightens its embargo against Cuba, penalizes foreign companies for doing business with the country, calls for free press and free elections as well as the release of all of its political prisoners, and indicates that sanctions will only be removed if Castro is removed from office.

2001: Five Cuban intelligence officers — famously known as the Cuban Five — are convicted of spying for the Cuban government, conspiring to commit murder, and other illegal activities in the United States. Later this year, following Hurricane Michelle, the United States sends food to Cuba for the first time in more than 40 years.

2002: Cuba is added to the America's "Axis of Evil" list of countries after Secretary of State John Bolton accuses the island nation of attempting to develop biological weapons.

2003: The Commission for Assistance to a Free Cuba is created in an attempt to end communist rule in Cuba.

2004: The United States under George W. Bush announces new restrictions on American travel to Cuba. These restrictions include fewer Cuban American family visits and remittances to the island.

2006: A 10-member bipartisan delegation from the United States journeys to Havana, but they are denied a meeting with Raúl Castro.

2009: In September, Obama lifts U.S. government restrictions on family travel and remittances to Cuba. In December, U.S. government subcontractor Alan Gross is detained in Cuba after he is accused of spying.

2011: The Obama administration reinstates permits for U.S. citizens to travel to Cuba for cultural and educational exchanges. This same year, convicted Cuban agent René González — of the Cuban Five — is released from a Florida prison.

2013: As a result of major immigration and travel reform, the Cuban government begins issuing passports to prominent dissidents who travel to the United States and other countries.

2014: The Cuban government releases Alan Gross for "humanitarian reasons." Then, following 18 months of secret talks brokered by Pope Francis, the United States exchanges the remaining three members of the Cuban Five for an American intelligence agent imprisoned in Cuba. It is during this year that Obama takes major steps toward reestablishing diplomatic relations with Cuba, and in December, he and Raúl Castro announce the restoration of full diplomatic ties between the two countries.