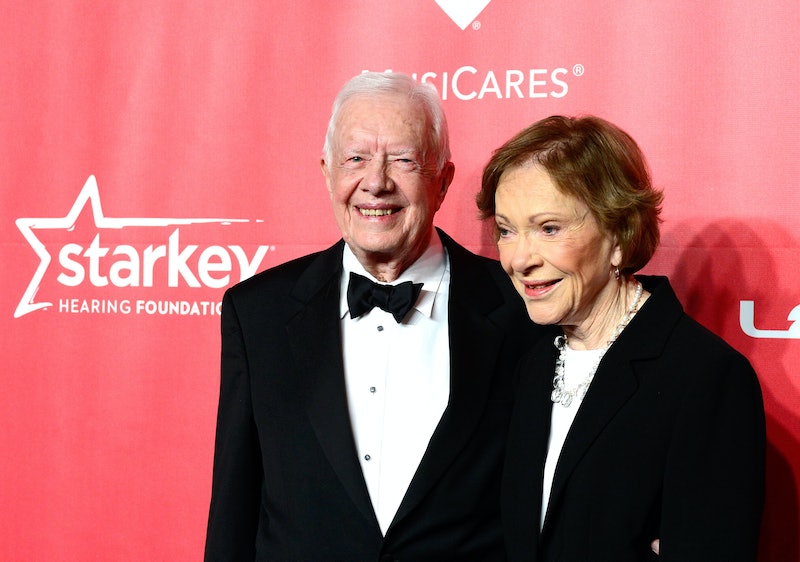 The feminist movement frequently comes under fire for completely nonsensical reasons — feminists are too "angry," or "equality has already been achieved," so why bother continuing to fight? Between the fact that Donald Trump frequently manages to get away with sexist remarks and the fact that feminism has been an ongoing struggle for a such a long time, the battle for gender equality is clearly far from won. Even now, women have to fight to achieve representation in political spaces, and deal with politicians who seem to think that women don't know what's best for themselves. However, there have also been some feminist U.S. presidents — not without their problematic decisions, of course, but no one's perfect. While we discuss the history of misogyny in American politics, it's also important to note the work that feminist allies have been doing.

Feminism is ever-changing, which means that it would have looked very different during Thomas Jefferson's time than it does now, under President Obama. Here is a look at some of the most and least feminist presidents from U.S. history; it is necessary for us to recognize that even the most feminist presidents have done extremely problematic things, while some of the most sexist ones have done some important work, too.

The 5 Most Feminist Presidents

Obama is staunchly pro-choice, and during his presidency has also worked to launch a national discussion of rape culture. But feminism is intersectional, which means that it must also work against things like racism. Obama has made important statements about police brutality, has been working toward immigration reform and, despite initially opposing marriage equality, eventually lent his full support to it. He is in favor of universal health care, and has been fighting for economic equality by doing things like supporting an increased minimum wage.

Carter explicitly identified as a feminist in 2014, and though he believes that Jesus would be against abortion rights, he also believes these rights should be granted under the Constitution. Carter has written extensively about the human rights violations faced by women around the world, including child marriage and sexual trafficking. Like Obama, he has pointed out the issue of rape on college campuses as a prominent one.

Yes, of course I consider myself a feminist. If a feminist is someone who believes that women should not be persecuted and women should have equal rights, then all men ought to be feminists.

In 1961, Kennedy established a national Commission on the Status of Women, appointing Eleanor Roosevelt as its chair. The commission urged Kennedy to order federal agencies to end gender discrimination in their hiring decisions. Then, in 1963, he signed the Equal Pay Act into law.

In 1918, Wilson finally gave a speech to Congress in favor of women's suffrage after learning that jailed suffragists were force-fed. During his first term, suffragists demanded that Wilson do more than pay lip service to their movement, and during his second term he stepped up to champion their cause. In his speech to Congress, Wilson also recognized that women had done a great deal to support the country's war efforts during World War I.

Adams might not have been a feminist by today's standards, and perhaps he wasn't entirely a feminist for his time. But his wife Abigail's insistence that he "remember the ladies" only scratched the surface of Adams' views. In response to Abigail's letter, Adams described women as "more numerous and powerful" than all other minority groups. And before he ever even met Abigail, he went through a brief stint as a teacher, during which he not only expressed affection for his young students but also saw potential in his female students to one day become politicians — an idea that certainly wasn't normalized during his time.

It is no secret that Jackson committed genocide against Native Americans. He also owned slaves and profited from their labor, going so far as to spark the First Seminole War to return slaves to their owners. Feminists should be in full support of removing Jackson from the $20 bill.

In 1992, Nixon gave Hillary Clinton some sexist advice — "If the wife comes through as being too strong and too intelligent, it makes the husband look like a wimp." He warned that if Clinton came off as "too strong" and "too intelligent," she risked upstaging her husband, Bill Clinton, who at that point was running for his first presidential term. In addition to his sexism, Nixon was also apparently racist, as revealed in a batch of tapes and documents from his presidency that came to light in 2009. In these tapes, Nixon is recorded as having said that abortion is necessary in the case of rape — or in the case of an interracial child.

Bush Sr. once made a joke in the company of Bill Clinton about "the ugliest woman" he had ever seen, referring to a pro-choice activist. In 1983, he behaved in a patronizing manner during a debate with Geraldine Ferraro, and as president, Bush vetoed the Civil Rights Act in 1990.

Jefferson was extremely hypocritical — despite writing about "life, liberty, and the pursuit of happiness," he was a lifetime slaveholder. He also allegedly raped Sally Hemings after forcing himself on her numerous times. Jefferson, like many of his contemporaries, took extreme offense to a lack of "female cleanliness." He did not see any reason for women to have the right to vote, as he believed that their only necessary obligations were childbearing and housekeeping.

Clinton's affair with Monica Lewinsky should not be the only incident that gives feminists pause. Clinton may be pro-choice, and he may have appointed Ruth Bader Ginsburg to the Supreme Court, but multiple women came forward to alleged that he sexually harassed or otherwise behaved inappropriately with them and frequently had their accounts shut down or dismissed.