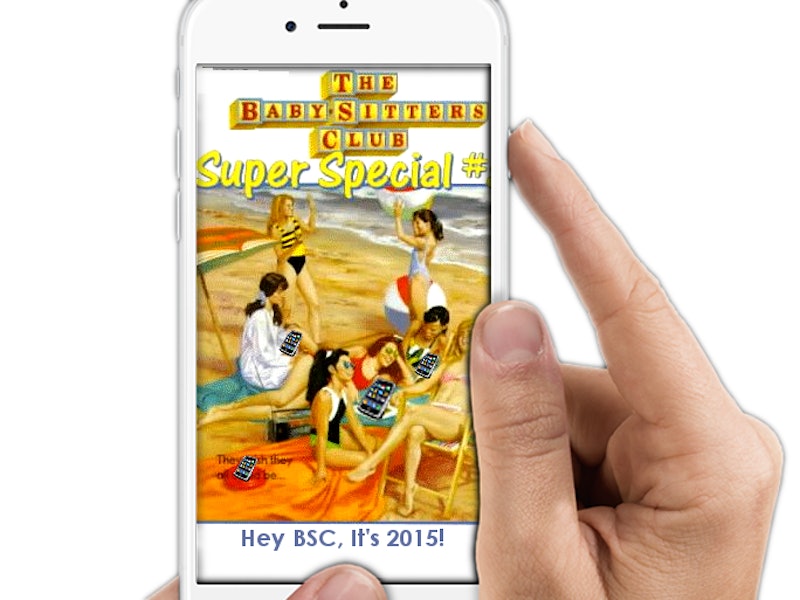 Like many other pre-teens in the 1990s, I was hooked on The Baby-Sitters Club books and was so excited when the movie version premiered in 1995. But as time went on, the BSC stayed the same. I often wonder what The Baby-Sitters Club would be like in 2015, because a lot has happened in the 20 years since the height of the pre-teen sitters' popularity. I mean, remember how it was so cool that Claudia had her own phone line? And how they held meetings at specific times for parents to call to make appointments for sitters? All of that would change with cell phones, text messages, and e-mail.

And knowing Kristy, as the ever-enterprising bossy 13-year-old she was, she'd think way bigger than the summer camp the sitters started in the movie. She'd probably turn the BSC into something like Urban Sitter or one of those other services that have become popular for child care. Not only that, the Internet provides so many more opportunities for money-making schemes, advertising, and going viral. Plus, the kids (ahem, "charges") would be different, too — these days, kids cry for some iPad games and beg mom and dad for money to buy apps. The BSC's "Kid Kits" would certainly need to be way more high tech.

Here's a rundown of everything I think would be different for the baby sitters in 2015:

Without the need for actual meetings, the BSC would meet over Google Hangouts and Skype to plot world domination, I mean, baby-sitting business. Kristy worked with a wunderkind programmer to create an online portal in which parents could request baby-sitters and schedule their days. Heck, it even lets the parents pay via credit card. 2015 is great, isn't it?

"Kid Kits" Have A Tablet

Remember the "Kid Kits" used to have crafts and such to entertain the kids? Well, these days crafts no longer do. So Kristy used some of the dues and money from all the business they've been doing to invest in kid-friendly tablets — not iPads, those are too expensive. They'd use some of those iPad Android clones for the kids.

Oh, Claudia. Remember how she used to hide junk food in her room? Well, no need for that anymore. She can pretty much order junk food whenever, wherever she wants using Grub Hub, Eat 24, Seamless, Yummy.com, Uber Eats — you name it. She even has an arrangement with the deliver people to meet her somewhere her parents won't notice.

Stacey Gets Into Trouble Online Dating

I always felt like boy-crazy Stacey was always on the verge of being in a Lifetime. Remember when she dated the older guy? Remember when she ditched the BSC for a guy — several times? I feel like she would innocently log onto Tinder, just curious about what other guys are outside of Stonybrook Middle School and end up getting catfished. Poor gal.

Dawn Would Be Such A Slacktivist

Dawn was super passionate about the Earth and environment. In 2015, I feel like she'd merely channel that passion into constant Facebook posts about how everyone's wrecking the Earth and how eating meat will kill us all. Dawn would become that person you hide on your feed, because the posts are constant and you wonder why she doesn't use some of that energy to actually go out and do something for the cause?

Mary-Ann Would Still Be Shy

And she'd relate to every single list about introverts on the Internet right now. It's OK, Mary Ann. Your time has arrived. Viva los introverts!

More like this
Jessica Simpson On The Time She Was Pursued By A Backstreet Boy & An *NSYNC Member
By The Editors
Taylor Lautner Copped To Finding Jacob "A Little Annoying" In Twilight
By Stephanie Topacio Long
James Cameron May Come To Regret His 'Titanic' Door Experiment
By Stephanie Topacio Long
Reese Witherspoon Confirms This Fan Favorite Will Return For 'Legally Blonde 3'
By Jake Viswanath
Get Even More From Bustle — Sign Up For The Newsletter
From hair trends to relationship advice, our daily newsletter has everything you need to sound like a person who’s on TikTok, even if you aren’t.