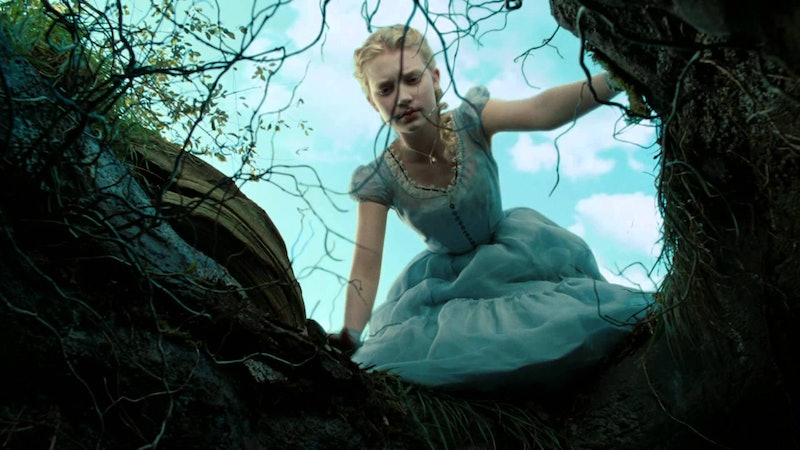 At their D23 Expo in California, Disney has provided a lot of new information about upcoming movies, from computer-animated to live-action. One of its buzziest bits of new info, though, is a little of both: Disney revealed the poster for Alice Through The Looking Glass , aka the sequel to their 2010 mostly live-action Alice in Wonderland, which was directed by Tim Burton. The beautiful posters feature Alice (played by Mia Wasikowska) and the Mad Hatter (played by Johnny Depp) dressed in many colors and using timepieces as stepping stones. The tagline is, fittingly: "It's time for a little madness."

The poster is highly collectible, fitting in with the uncanny aesthetic that captured audiences' imagination in the first movie and led to the project's large amount of commercial success. If these visuals are any indication, the sequel seems as if it'll follow the first film's lead in creating an ethereal universe.

Considering the sequel is coming so many years after the first movie, there has been surprisingly little info about the project, and absolutely no visuals — until now. Here are the posters, as well as what we know about the film thus far ahead of its current 2016 release date:

It Won't Be Directed By Tim Burton

Don't worry, Johnny Depp! Though he won't be returning to direct, the Alice In Wonderland director is a producer. Instead, James Bobin — who helmed the newer Muppets movies — will direct.

Many Of The Old Characters Will Be Back

In addition to the two on the poster, Anne Hathaway's White Queen, Helena Bonham Carter's Red Queen, Stephen Fry's Cheshire Cat, and Alan Rickman's Caterpillar — among others — will be returning.

Some New Characters Will Appear

Alice Will Have A New Quest

She'll have to journey through a new world, battle the villain Time, and retrieve a scepter before Wonderland is destroyed.

It Will Stray From The Book

This is obvious because the book Alice in Wonderland and Through the Looking-Glass featured entirely different characters, while the film versions are keeping the same ones.

The movie's release was revealed by the poster, coming six years after the original movie.

Will this film manage to create the same ethereal aesthetic as the last? From the looks of things, it might just be able to. (Personally I, for one, would see it for Sacha Baron Cohen alone.)