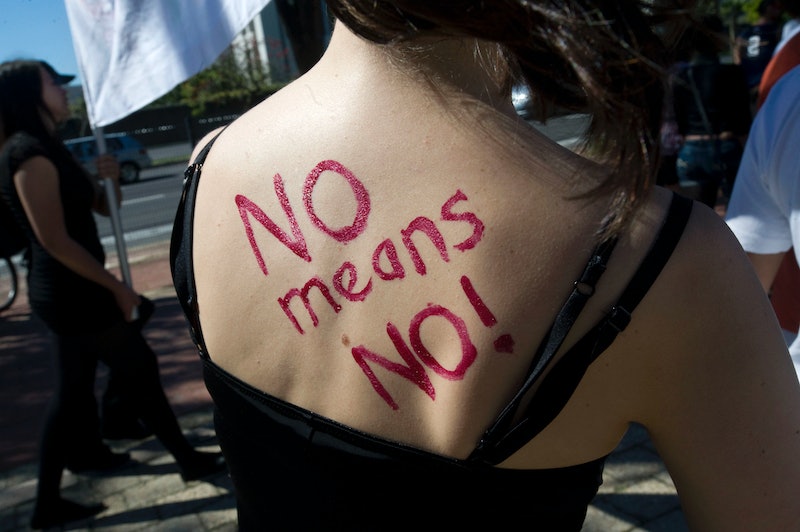 When it comes to sexual assault, the only person responsible is the perpetrator, full stop, end of story. However, as activists have long observed and as a new study points out, victims of sexual assault often blame themselves for the attacks. And believe it or not, that's not the saddest finding in the study.

The study comes out of University of Texas at Austin, where researchers surveyed 129 female college students who had been victim of sexual assault. Because unfortunately, sexual assault is common enough on college campuses that you can do things like that. The surveys tried to ascertain how the young women assigned blame in their assaults, and who or what they considered to have some degree of responsibility for what happened to them. And sadly but not necessarily surprisingly, the researchers found that 62 percent of the young women considered themselves to be at fault for their assaults.

But the bad news doesn't end there. Although lots of women were also willing to place some blame for their being assaulted with "society" or with "the situation" (about 66 percent and about 25 percent, respectively), very few women considered their attackers to be at fault. More than half of the surveyed women said their attacker wasn't at all to blame, only seven percent thought he was "quite a bit" at fault, and no one — not one of the 129 young women — said that their attacker was completely to blame.

It should be noted that this study's findings differ from multiple studies done in the 1990s and early 2000s which seemed to indicate that most survivors of sexual assault do in fact blame their attackers more than themselves, which could indicate that either young women's attitudes and reactions are different today, or that something about the design of this study is leading to different results. Either way, however, the findings are sadly very plausible, though more research would be needed in order to confirm them.

We live in a culture in which victim-blaming is sadly common. You can see it on college campuses and on TV, in the pages of national newspapers, even blatantly on display in the criminal justice system. A British survey found that a majority of both men and women thought women were partially responsible for their rapes. A 2013 study looking at teens and young adults found that over 50 percent of perpetrators considered their victim to be "completely" responsible. Another 2013 study found that victims of sexual assault were often times even more likely to assign blame to themselves than third parties were. And the examples just go on and on.

And that is not OK.

Sexual assault is a crime, both legally and morally, and as such, the only person responsible is the perpetrator. People who commit sexual assault make a choice to ignore or override a fellow human being's decision about what they do with their body. The attacker makes a choice. The victim has their choice taken away. That is, in fact, a key part of what makes sexual assault assault. And as such, only one party can be said to be responsible.

In most sexual assault cases, as with any crime, it's easy to say things like, "Well, if she had just done things differently it wouldn't have ended up this way." And theoretically that might be true, but it doesn't change who is ultimately responsible for what did happen. There are so many things that women are told to do in order to avoid being raped that I'm surprised "breathing" hasn't been added to the list yet. There is always something more we're supposed to be doing, but assaults still happen anyway, and the reason is because assaults don't happen because of the victims (be they women or men). Assaults happen because of perpetrators. Perpetrators are the ones making a choice to assault someone. And as such, full responsibility rests with them. Period.