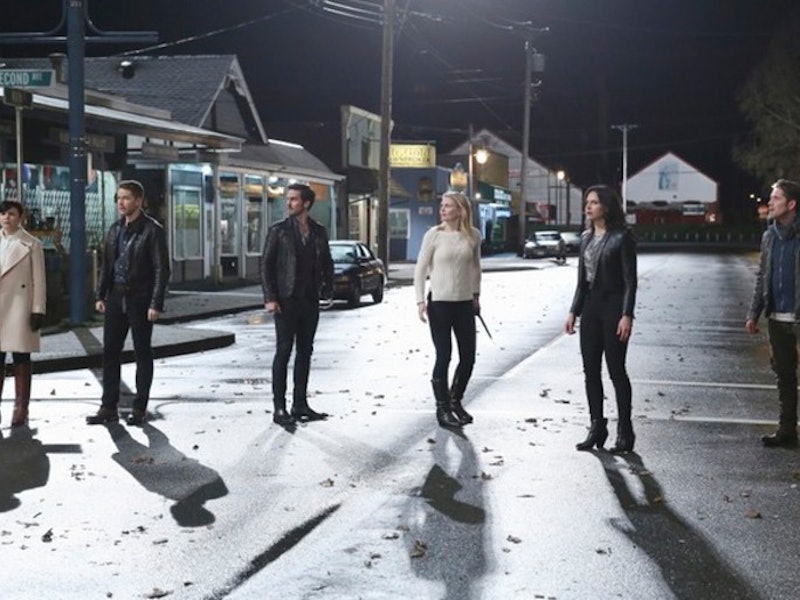 The struggle is real for TV fans during the summer hiatus. Several months without new episodes of a series that ended in the spring with a major cliffhanger is pure torture, but thankfully, we're not too far away from fall premieres. It feels like I've been waiting for the Once Upon A Time Season 5 for way too long, but in actuality, the Season 4 finale only aired in May. Plus, as the premiere date inches closer, fans are getting more and more details about what we have to look forward to when it comes to everyone back in Storybrooke (and beyond). In fact, the Once Upon a Time Season 5 premiere opening scene has been released, and it's only served to make me even more excited for the show to be back on my screen.

In the clip, published by The Hollywood Reporter, we pick up right where "Operation Mongoose: Part 2" left off. Emma has just sacrificed her soul to become the Dark One in order to ensure Regina's happy ending is still possible, and the dagger now bears the former Savior's name. Regina, Robin, Snow, Charming, and Hook are all dumbfounded and desperate to get her back, but Emma is nowhere to be found and seems to have been transported out of Storybrooke — and perhaps out of this realm? — entirely.

While the clip is less than two minutes long, it still gives viewers a lot more information than we had previously, and also leaves me with some complicated thoughts.

We already know that Regina is going to be heading up Operation Emma, but her initial reaction is just so delightfully Regina. Of course she thinks Emma's an idiot for sacrificing herself on Regina's behalf — but we all know that's just deflection because she can't quite process the enormity of the gesture and she's scared about the possibility that they may not be able to get Emma back.

Someone Needs To Get That Dagger From Hook

Obviously Hook is sprung off Emma and has been for ages, so it makes sense for him to grab the dagger and immediately try to summon her, even if his effort is in vain. However, in no universe should he ever be allowed to be in possession of the dagger — his former dark ways and lack of magic/knowledge about it sorta precludes him from taking on the position. Hand it over, Guyliner.

Are Snow & Charming Going To Do Anything?

I know it's a short scene, and I know they're probably in shock, but one of my major frustrations with Charming and Snow last season is the fact that they really didn't do much of anything. It's all fine and well telling us that these two are heroes, but any heroic and brave acts they've performed might as well have been in another lifetime. Chop chop, Charmings!

Henry has the heart of the Truest Believer, so I'm not actually all that concerned with how he'll cope with the most recent train of events. Still, it really sucks for the kid. He had to deal with having the Evil Queen for a mother and working with her to get back on the right track, and just when it seemed things might be calming down, this happens.

Emma has been transported elsewhere — the Enchanted Forest, it seems — after becoming the Dark One, but I fear for her. I love her; she's the savior. And while she needs to truly plumb the depths of her own potential for evil, I just don't want her to do anything she'll come to regret once she's restored to the woman she once was.

Watch the full clip from the premiere below, and try to temper all the feels you're inevitably having.