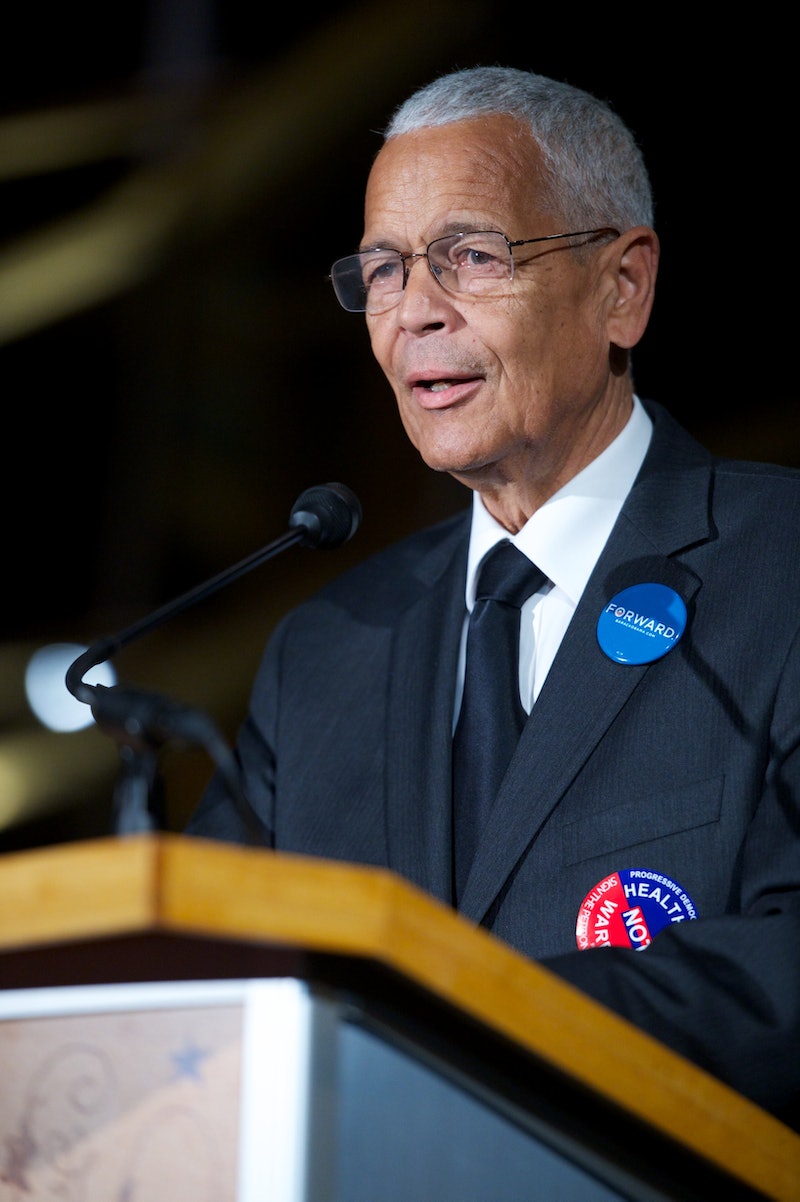 Words were hard to find for many at the news that former NAACP chairman and civil rights activist Julian Bond had died at the age of 75. Bond, who was known for his championing of civil rights since the 1960s, had inspired American citizens for years, not only as the NAACP chairman, but also as the leader of the Student Nonviolent Coordinating Committee (SNCC) while a student at Morehouse College, as a Georgia representative and senator, and as the first president of the Southern Poverty Law Center. As the country mourns the loss of this incredible leader, these nine inspiring quotes from Julian Bond show that while words might be hard for us to find right now, he had a way with them that helped shape the country to the progress its seen today.

Bond first got his start as a social activist protesting against segregation and Jim Crow. He led campaigns to register black voters and as he moved further into leadership positions, including eventually heading the NAACP, he continued to speak out on equality as violence against black women and men continued to be a pervasive issue in the country. Bond also took up other issues including reproductive rights, and LGBT rights, proving he truly was a champion of justice for all. Here's a look at what Bond stood for during his life, in his own inspirational words.

America is race. From its symbolism to its substance, from its founding by slave holders to its rending by the Civil War ... from Emmett Till to Trayvon Martin and to Michael Brown.

In a March 2015 speech at Edgewood College in Madison, Wis., Bond spoke about the protests in the area that broke out after Tony Robinson was shot by a police officer. Despite the civil rights movement that saw much progress, race continues to — and always will — play a huge role in the past of present of the United States.

Most of those who made the movement were not famous, they were the faceless. They were the nameless, the marchers with tired feet, the protesters beat back with fire hoses and billy clubs, and the unknown women and men who risked job and home and life.

In that same speech, Bond acknowledged that Martin Luther King, Jr. was a prolific leader, but he said that those demonstrations, as well as the ones today, were a people's movement. "It's always a time for civil disobedience," Bond said.

They told us that in Mississippi, segregation could only be attacked from the outside, and we went right to the heart of the beast and attacked it there and beat it there.

To commemorate the 50th anniversary of the SNCC, Bond spoke with NPR and said that because he was young, he could take risks that older adults could not because of obligations keeping them in one place. So Bond, along with many others, took risks — including fighting racism head-on.

I think our greatest triumph was that we existed at all...

In that same NPR interview, Bond said that the greatest triumph of the SNCC was existing even after the group was advised against it. The triumph, he said, was dropping out of college and banding this organization together to go to the South and fight racial injustice where it was most prevalent. And the fact that they saw success? Even better.

A man wrote in to the NPR interview, stating that he had spoken with two black women who didn't know about the founding of the SNCC or about Ella Baker, one of the most prominent female civil rights activists of the time. Was this a good thing, the writer asked? Bond replied with the above comment, as well as a lesson on the importance of Baker's involvement.

Those were the days when politicians from both parties supported the struggle for civil rights, now they struggle to be civil.

In a speech at Kent State's annual Martin Luther King, Jr. event, Bond brought up the years from 1955 to 1965, when the Voting Rights Act was passed. But, he said, despite the bipartisan efforts, those were clearly not the good ol' days, as white supremacy ruled.

The truth may hurt, but it's the truth.

Bond said this in 2013 after making a controversial statement about the Tea Party in which he compared it to the Taliban arm of American politics. The Tea Party, he claimed, is "admittedly racist," "overtly political," and has "tried as best as they can to harm President Obama in every way."

On Advice For Men

I would say to them “Talk to a woman.”

For the 40th anniversary of Roe v. Wade, Bond discussed the occasion with the Center for American Progress. The interviewer asked what he would say to men who wonder how they should enter and exit the conversation of abortion, and Bond responded with that gem. He continued, "Reach over to the woman sitting next to you and ask her what you can do to help her in this situation."

On Who Has Rights

There is no coloration to rights. Everybody has rights. I don't care who you are, where you come from. You got rights. I got rights. All God's children got rights. We could make a song out of this. But anyway, I think this discussion is more a diversion than anything else. Because we all have rights. And they are human rights because we are human beings. And that's just it for me.

In that same interview, Bond talked more broadly about rights in America, showing how he became the leader our country knew him as.