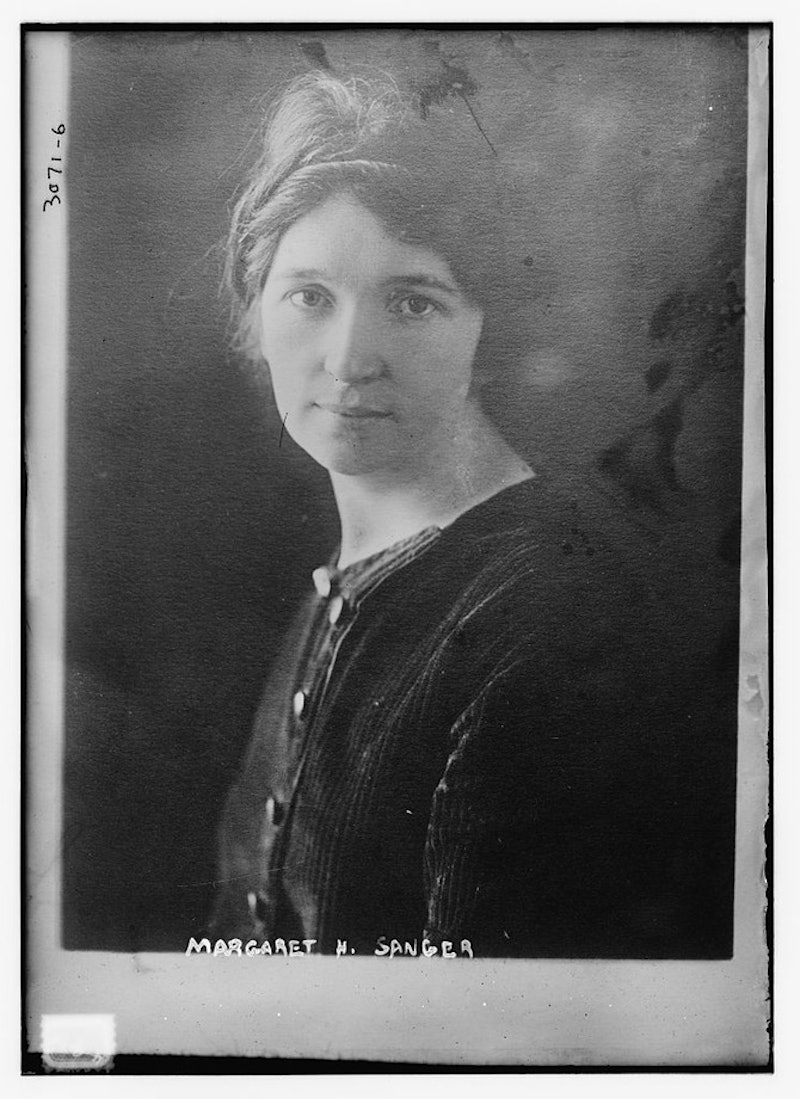 In a Wednesday interview with Fox News, Republican presidential candidate Ben Carson put forward a string allegations against Planned Parenthood's motives and, more specifically, the beliefs of its founder. Carson cited the oft-told right-wing myth about the women's health center's origins, stating "one of the reasons you find most of their clinics in black neighborhoods ... [is] to control that population." To back his allegations, he pointed to founder Margaret Sanger, a nurse and vocal advocate for birth control in the early 20th century. But was Sanger really a racist eugenics supporter as many conservatives have long characterized her?

Maybe I am not objective when it comes to Planned Parenthood, but, you know, I know who Margaret Sanger is, and I know that she believed in eugenics, and that she was not particularly enamored with black people. I think people should go back and read about Margaret Sanger ... Look and see what many people in Nazi Germany thought about her.

So, what's the real deal with Sanger? The short answer is no — Sanger's goal in life was not to exterminate black people. But the long answer is that she lived in a time period during which racial attitudes were largely ingrained in American culture, and while some claimed she maintained the pervasive white supremacist attitudes of her day, the reality is she worked to empower both impoverished immigrant and African American women with bodily autonomy. Sanger's advocacy for women's voting, education, and contraceptive rights was rooted strongly in the health issues and birth complications her mother suffered during her many pregnancies and the tragic plight of poor women of all races and ethnicities she encountered as a nurse.

In the early 1900s, prior to the raised awareness and availability of contraceptives, back-alley abortions and botched self-terminations were relatively common among women of impoverished New York communities where Sanger worked, Vicki Cox wrote in her book Margaret Sanger. Most women who either died or seriously injured themselves attempting to terminate their pregnancies were immigrants who lived in poverty and obviously couldn't afford to feed and clothe more children, according to the National Women's History Museum.

It's hard to describe Sanger in today's definitions of "pro-choice" and "pro-life" since her views were shaped by what abortion procedures were like in her day, not ours. Sanger believed abortions should and could be avoided due to the health dangers that came with the procedures at the time. In a 1918 paper entitled "Birth Control or Abortion?" she said "the hundreds of thousands of abortions performed in America each year are a disgrace to civilization," but that statement was made in defense of birth control, which she saw as a viable way to reduce the skyrocketing numbers. She advocated for empowering parents to have the tools to prevent unwanted pregnancies, like birth control, and this, in turn, would be the ultimate way to fight poverty.

There's no denying the concept of "eugenics" — a social movement focused on improving the genetic features of the human population through selective breeding — is largely rooted in the notions of Anglo-Saxon whites' supremacy, and after it gained momentum in the 1920s, it was the driving force in the work of German Nazis. But Sanger actually had no known connections to Nazi Germany and openly condemned Adolf Hitler's actions against Jews. In a 1939 unpublished paper unofficially titled "Hitler and War," Sanger wrote:

I was one of the few Americans who joined the Anti-Nazi Committee and gave money, my name, and any influence I had with writers and others, to combat Hitler's rise to power in Germany. ... I firmly believe that Europe will not have a just Peace until Germany gets rid of Hitler.

In reality, Sanger's approach to eugenics had little to do with race. Susan Reverby, a health care historian and professor at Wellesley College, told NPR that Sanger's support for eugenics was rooted in the idea that "people should have the children they wanted." Sanger wrote she believed birth control should be used to promote "the process of weeding out the unfit [and] of preventing the birth of defectives." It seems more likely her ideas about improving the human population's genetic features had a lot more to do with lowering the odds of physical and mental impairments than race.

To be fair, this has also spurred other critics to claim her involvement with eugenics was an attempt to remove people with mental illness and physical disabilities, but Sanger does not appear to have ever written or said anything threatening toward these communities. Her efforts should, instead, be interpreted as a well-meaning intention to ensure more babies were born healthy.

As for Sanger's personal views on race, she could easily be viewed as a progressive of her day. Sanger worked closely with NAACP co-founder W.E.B. Du Bois to ensure that black communities had access to contraceptives. Her project with Du Bois, the "Negro Project," provided African Americans with equal access to things like medical care, a controversial initiative at the time but a sign Sanger sought to empower the black community rather than take away from it. In a 1946 paper entitled "Love or Babies: Must Negro Mothers Choose?" Sanger wrote:

The Negro race has reached a place in its history when every possible effort should be made to have every Negro child count as a valuable contribution to the future of America. Negro parents, like all parents, must create the next generation from strength, not from weakness; from health, not from despair.

Sanger essentially asserted her belief that African American parents, just like white parents, should have the right to choose how many children they had. As for the anti-Planned Parenthood fantasy that Sanger's racial inclusiveness is only evidence of her desire to control the black population, NPR's Amita Kelly points out that Sanger never forced black women to use birth control. It seems she merely wanted them to have the same options as white women.

Carson wasn't the first Republican to inaccurately characterize Margaret Sanger. According to The Washington Post, former Republican presidential candidate Herman Cain asserted the same views back in 2011. In 2009, Hillary Clinton praised Sanger and came under fire by Senate Republicans who also cited Sanger's connection to the eugenics movement. Ultimately, a little research effectively proves the far-right's obsession with demonizing Margaret Sanger seems to have a lot less to do with her attitudes about race than the fact that she founded Planned Parenthood, an organization they have long attempted to dismantle. Sanger fought the inherently misogynistic and racist attitudes of her day to support the intersection of women of color and women in poverty, and that's arguably more than a lot of her conservative political critics can say.