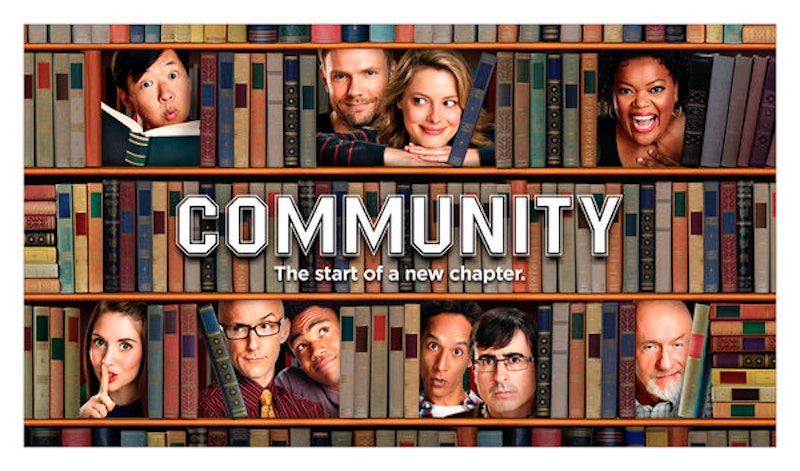 Things look different over in Greendale — and not just because ousted showrunner and creator Dan Harmon is back on the scene, but because things are different. In a new trailer for Community Season 5, the students of GCC talk shop on the "reestablishing" re-pilot premiere episode of the super-zeitgeisty, super-niche series. Which is to say: do not expect the Community you once knew. Not even that weird version somebody slapped together and called season four. It's a whole new Greendale Community College out there, and things are bound to get polarizing. And likely very strange.

Which means the already put-through-the-ringer series is going to get, well, put through the ringer once more. But hopefully for the win — at least that's the hope. We know this much to be true thus far: season five picks up a year after last season, with Jeff Winger's idealist law career shot to shit, forcing him to return to Greendale as a law professor. And it seems as though the whole gang has reenrolled at the school via some unknown throughline (perhaps the darkest timeline?) of logic.

But what's most interesting is the impetus behind the seemingly large-scale change. "The goal is for this to be a repilot," explains Yvette Nicole Brown. "If you've never seen the show before, you could jump in at this season five, episode one."

"The first episode is really all about reestablishing why all here at Greendale trying to bring the gang back together," echoed Gillian Jacobs. And, it seems, widening its audience.

Community has long been a beloved, but redheaded stepchild in the world of NBC's Thursday Night comedy offerings. Its audience was young and devoted, and its writing hard to break into if you weren't in on the joke from second one, making it tough to grow the audience. None too surprising considering the peacock's penchant for enjoyable and/or off-beat humor that doesn't always bring in ratings (see: 30 Rock, Parks and Recreation, Community, Up All Night, Best Friends Forever) which in turns causes the brass to doubt themselves and the viability of the often critically beloved series.

But this season of Community promises comedy of a slightly broader, more accessible sort — at least so says the oft-outspoken Joel McHale, who championed Harmon's return to the series following that middling-at-best season four. Which was undoubtedly a good thing, but Harmon's insecurity around those studio execs is notorious. Just last month while doing the rounds for his Adult Swim series Rick and Morty , the showrunner and creator spoke on just how deep his issues with those looming and string-pulling authority figures actually go.

"[The Adult Swim process] was a crazy experience for me because it made me realize what I had already become in just a few short years of doing network," Harmon says. "[I was] mitigating and compromising on all these things, talking to Justin, Justin pushing back. And I remember thinking and feeling like, 'Eh, don't push back that much.' I gained so much respect for both Lazzo and Justin because Justin on one hand was like, 'Yeah, but I really believe in this.' I wouldn't have because I would have been insecure."

What remains to be seen is not whether or not this change will bring new life to the series, but whether or not its something Harmon vouched for or was forced to explore as a condition of his return. Still, while no one would necessarily argue that studio decisions are the best creative decisions, going back to the drawing board on Community's structure might be a blessing in disguise.

Following a season that was largely panned and under-watched by a fan base who'd all but given up hope, the series was in need of a little tenderness, some showrunner coddling, and a whole slew of rejiggers. By capitalizing on the publicity that comes with the still-looming shadow of the "NBC Versus Harmon Battle Fiasco of 2012" to relaunch a fresh-paged Community, the series may just find the sweet spot its been so desperately searching for these past four seasons. Or at least bring it one step closer to #sixseasonsandamovie.

More like this
Netflix Just Revealed When 'Never Have I Ever' Seasons 3 Will Premiere
By Gretchen Smail and Alyssa Lapid
'Unforgotten's Brand New Character Joins At A Pivotal Moment For S5
By Bustle UK
'Bridgerton' Season 3 Includes A Major Cast Shake-Up
By Grace Wehniainen
Will The Pentaverate Get A Season 2?
By Kadin Burnett
Get Even More From Bustle — Sign Up For The Newsletter