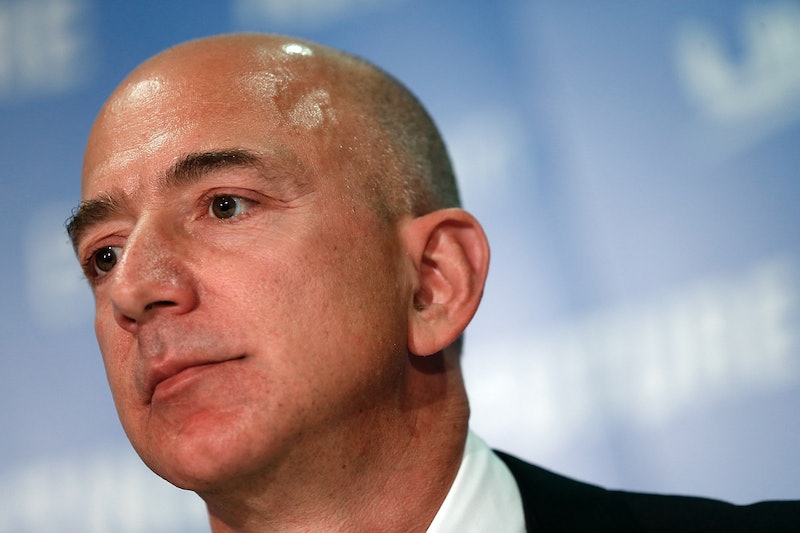 On Saturday, The New York Times published an article about Amazon that's as mammoth as the retailer itself. It was also as scathing as a one-star rating. Based on interviews with more than 100 former and current employees, the piece describes the allegedly unfair and apparently draconian working conditions at the company — from quantifying workers with a rating system to treating severely sick staffers with absolutely no empathy. The exposé is so damning that it prompted Amazon CEO Jeff Bezos to respond with a direct memo to his employees refuting the claims; a rare move for the exec. While the response appears sincere, it doesn't even begin to address the article's many allegations.

The overall picture that the 4,500-word piece paints is of a workplace in which individual needs come second (or don't factor at all) to the common goals of the company. In his memo, Bezos denies that the company's culture is as described. Perhaps the quote that best sums up the experience of working at Amazon comes from Bo Olson, a former book marketer, who said, "Nearly every person I worked with, I saw cry at their desk."

Naturally, an exposé like this was not going to sit well with Bezos, who founded Amazon and has been its CEO for more than two decades. In an attempt to defend the company, he sent the following memo to the entire company staff:

If you haven’t already, I encourage you to give this (very long) New York Times article a careful read: http://www.nytimes.com/2015/08/16/technology/inside-amazon-wrestling-big-ideas-in-a-bruising-workplace.html I also encourage you to read this very different take by a current Amazonian: https://www.linkedin.com/pulse/amazonians-response-inside-amazon-wrestling-big-ideas-nick-ciubotariu Here’s why I’m writing you. The NYT article prominently features anecdotes describing shockingly callous management practices, including people being treated without empathy while enduring family tragedies and serious health problems. The article doesn’t describe the Amazon I know or the caring Amazonians I work with every day. But if you know of any stories like those reported, I want you to escalate to HR. You can also email me directly at jeff@amazon.com. Even if it’s rare or isolated, our tolerance for any such lack of empathy needs to be zero. The article goes further than reporting isolated anecdotes. It claims that our intentional approach is to create a soulless, dystopian workplace where no fun is had and no laughter heard. Again, I don’t recognize this Amazon and I very much hope you don’t, either. More broadly, I don’t think any company adopting the approach portrayed could survive, much less thrive, in today’s highly competitive tech hiring market. The people we hire here are the best of the best. You are recruited every day by other world-class companies, and you can work anywhere you want. I strongly believe that anyone working in a company that really is like the one described in the NYT would be crazy to stay. I know I would leave such a company. But hopefully, you don’t recognize the company described. Hopefully, you’re having fun working with a bunch of brilliant teammates, helping invent the future, and laughing along the way. Thank you, Jeff

The message was a significant, necessary gesture. Offering his personal email address to staffers who face issues was particularly bold. However, it fails to address six very serious allegations made in the exposé. (However, the LinkedIn article Bezos encouraged his employees to read does address them, and generally denies the New York Times' claims.)

According to the Times, the working conditions at Amazon are deliberately stringent so that "weak links" can be easily identified and be constantly replaced. Robin Andrulevich, a former human resources executive, called this effect "purposeful Darwinism." Essentially, this implies that your job is perpetually in jeopardy, and if you want to keep it, you better go above and beyond the next person.

The article also describes an anonymous peer review system designed to encourage employees to provide constructive feedback of each other, both negative and positive. However, the NYT says that some staff members use it to backstab and undermine colleagues, creating an unfair system in which employees' jobs are endangered by anonymous critiques that can be completely unfounded.

The piece also describes an intense annual review "tournament" in which higher-level managers rank and discuss their subordinates. It sounds like a battle to the death. One former marketer in the company's retail department said: "You learn how to diplomatically throw people under the bus. It’s a horrible feeling."

4. That Employees Are Overworked

One of the most damning allegations made in the article is that employees often work inhumane hours, and during weekends and holidays. Some Amazon employees have held "marathon conference calls" on major holidays like Easter and Thanksgiving, have been pressured to work on vacation (and have even been reprimanded for having unreliable Internet access while on vacation), and regularly work late nights and weekends.

5. Every Employee Is Allegedly Being Tracked And Quantified

Amy Michaels, a former Kindle marketer, told NYT, "The company is running a continual performance improvement algorithm on its staff."

6. Employees Get Berated, But Cannot Defend Themselves

Another aspect of working at Amazon, according to the Times, is being subjected to extremely harsh criticisms that often include foul language. Employees often do not speak during meetings for fear of being shut down.

Noelle Barnes, a former marketer at the company, said, "Amazon is where overachievers go to feel bad about themselves. Another Amazonian, Stephenie Landry, echoed her: "There’s no reward for not speaking up. 'Good backbone' is a compliment."

The only support Bezos provides for his counterargument is an article that's written by a current Amazon employee. While it does address every point made in the Times piece, a similar point-by-point response should have come from Bezos, too — not only to rectify this PR nightmare, but also to really reassure his staff that they are indeed valued.