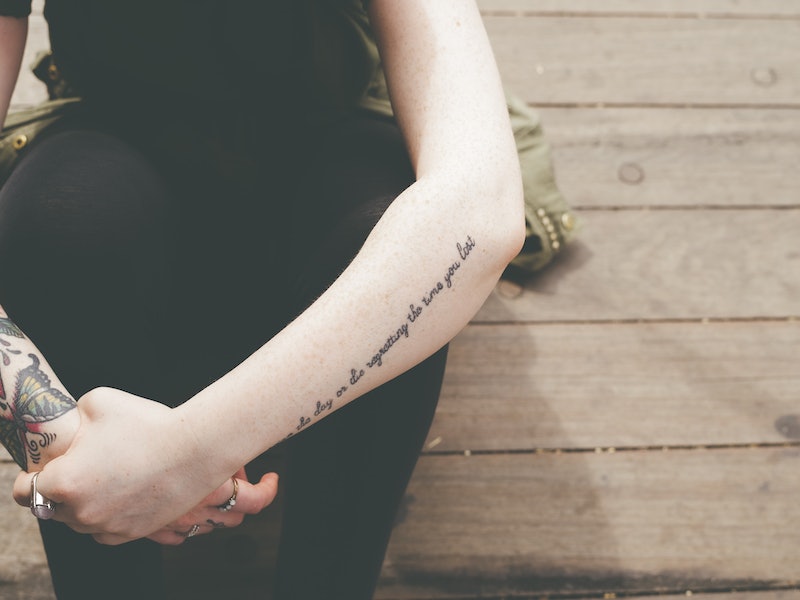 I always thought as a bartender, we were the only ones keeping loads of secrets from our customers, but it turns out tattoo artists won't tell you everything, either, and are just as guilty as the people who hold your future inebriated self in their hands. As a drink slinger, I have many tricks up my sleeve. For example, I tell people we can’t make Long Island Iced Teas because we're out of some ingredient, when really I’m slightly judging their drink of choice because no one needs that much booze in front of them. And believe it or not, tattoo artists have a few things they're keeping mum about, as well.

Never one to be comfortable in the dark, especially when it comes to tattoos, I had to find a tattoo artist to give it to me straight. Who better than the Dirk Vermin, owner of Pussykat Tattoo Parlor in Las Vegas and star of Bad Ink, to give me all the deets on things most tattoo artists won’t tell us? Dirk has been tattooing for over 20 years and while the bulk of his work featured on A&E's Bad Ink features his amazing ability to cover up even the worst tattoos, he has a few things that he's just not willing to do for money. Can anyone say tribal band tattoos? Dirk has literally performed thousands and thousands of cover-ups and together we’ve compiled a list of things your tattoo artist won't tell you that just may save you from tattoo drama and regret.

1. Your Tattoo Artist Wants To Make Money, Not Your Decisions

You may be wondering why your artist wouldn't prevent you from making a decision he or she might assume you'd regret — this is a job. While the word "artist" is in the title, it doesn’t mean that these skilled professionals aren’t trying to pay their bills with their craft. If you’re wondering years later why your tattoo artist let you get “Baddest Bitch” on your ass, the simple answer is that you're an adult (you did sign a waiver that you were of age and sober enough to consent). You made that decision. Artists have slots to fill; if they're turning away people just because the tattoo is questionable, that's money heading out the door.

2. Getting The Name Of Anyone Besides Your Mother Or Child Is A Terrible Idea

Most of us know that tattooing a new boo’s name on your arm is risky business. You are basically asking the universe to immediately destroy your relationship. Stop testing the way the world works and hold off on the name tats. Blissful youthfulness, saving broken relationships, and even ownership of a partner (yes, branding someone is a thing!) makes this tattoo the number one cover up job that artists perform, according to Vermin. “Believe me, young love ends, the tattoo stays.” I couldn’t agree more.

3. Not All Shops Will Do Finger Tattoos

According to Vermin, most shops will not do finger tattoos, but that's rarely advertised on the website. “You touch them up forever, they spread and fall out unpredictably and are just not worth it for us. Most tattoo artists have finger tattoos, but we are 'industry' and can touch them up [whenever we want]." He continues that wedding bands are especially tough. "We can’t go all around the finger and sooner later it will look like [crap],” he says. So, for all you romantics out there? Buy a ring.

4. Inside The Lip Tattoos Are Not A Good Call

Ah yes, the inner lip tattoo. So alluring, so enticing, so incredibly badass… yet so incredibly temporary because they are in the inside of your wet, bacteria-infested mouth. That didn’t stop me from getting one, but since most of my friends have had and lost lip tats, Vermin and I agree that this had to make the list. “Bad idea for so many reasons," he says. "They look cheap and trashy almost immediately, they spread into the skin and fallout quickly.” While you may luck out and find an artist willing to do it for some cash or maybe for some laughs, just remember you’ve been warned… and don’t try to get your money back when it disappears.

5. Getting A Tattoo In The Summer Is Not A Great Idea

The summer is the time for short shorts, crop tops, and zero sleeves, but the only thing your tattoo hates more than being smothered while it’s healing is being in direct sunlight. According tattoo sources at Miss Meg’s, tattoo ink is made up of pigments that can fade easily when exposed to the sun’s ultraviolet rays. Obviously, we can’t be expected to wait three months for the sun to disappear to get our dream tattoo, and those living in sunshine all year round are not going to deprive themselves of tattoos for life. In that case, here’s what you should know: According to Skin-Artists.Com (and most reputable parlors), while your tattoo is healing, cover it up. Wear clothing while walking in direct sunlight, avoid the beach, and be very annoyed for a few weeks. It will definitely be worth it.

6. You Should Tip, Please

It’s in bad form to ask for a tip from someone, but while good ink costs tremendously more than a good drink, it’s still customary to tip for a job well done. Tattoo artists understand that people save money for bigger pieces, so any tip is appreciated. Save a little extra cash for your work of art and not only will you be showing your artist some appreciation, you’ll put yourself in a good position for getting a deal on a future tat. According to sources at Tattoo Artist Magazine, tipping your tattoo artist is a very good look. To be sure that I wasn't the only one insisting tattoo artists get some tips, I asked Dirk, who tells me that "tipping in the tattoo industry is pretty standard, especially if you know you're getting a good deal! The amount you tip is really up to you as a customer. For every 100 dollars, [tipping] 20 dollars on the low end, 50 dollars on the high end usually a pretty good rule of thumb. [It's] up to you but it is always appreciated."

7. What The Shop Minimum Really Goes Towards

The shop minimum at a tattoo parlor is the overhead costs that it takes to get you tattooed. It costs money to keep clean, sterile equipment including needles, ink, and workstations. While I certainly cringe at high shop minimums when I’m getting a tiny tattoo, I definitely want my tattoo and I want it sans infection. According to Vermin, the question “What’s your shop minimum?” can easily dampen your artist’s mood. “Does that mean what is the absolute least amount of money you can give my time and skill without completely insulting me?” Vermin jokes. The shop minimum most often goes towards the equipment, not the talent.

8. The Deal With White Tattoos

We saved the best for last! While there are definitely some stunning white henna tattoos (even Vermin is willing to admit to seeing some white tattoos that look stellar) they are an exception to another growing trend that leaves most with regret. As Vermin says, these tattoos symbolize “no commitment” to tattoo artists. “That’s the problem: You’re going through the pain and healing for something that sort of invisible,” Vermin says. Some shops won’t even perform white tattoos because as Vermin explains, “White [ink] falls out, can get splotchy and yellow overtime. It usually looks like some weird scar or birthmark.” It’s your body and there are definitely artists who will give you a white tattoo that looks amazing… at least on the first day.