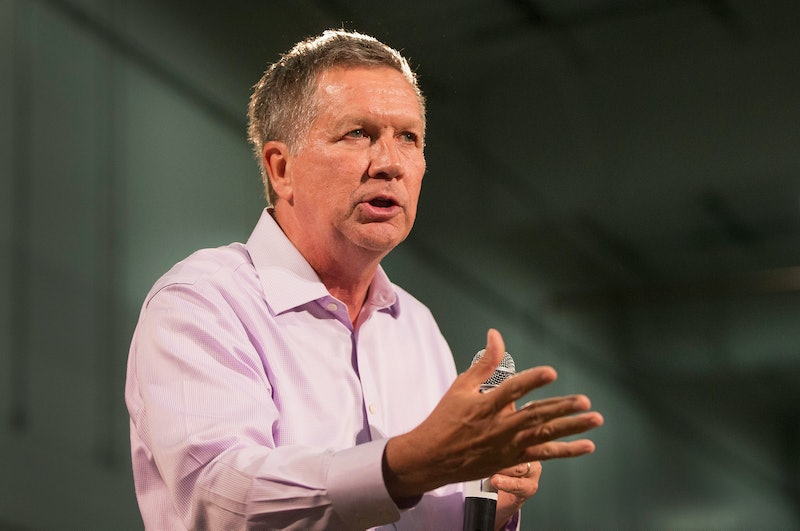 Ohio Gov. John Kasich seems to have changed his mind about abortion exemptions, since his latest claim doesn't match up with his record in Ohio. During a town hall meeting last week, Kasich said that he supports abortion exemptions for cases of rape, incest, and the mother's life being at risk. This stance sets him apart from other Republican presidential candidates, such as Mike Huckabee and Marco Rubio, who don't believe abortion should be allowed under any circumstances. More importantly, though, Kasich's record on abortion casts his latest claim in a doubtful light.

In 2011, Kasich signed a 20-week abortion ban into law in Ohio that didn't have any exemptions for rape or incest cases, and only a very narrow exception for mothers' health. The law only allowed for abortions after 20 weeks of pregnancy if a doctor determined that the fetus wasn't viable yet (meaning it couldn't survive outside the womb) or there was a medical emergency that put the mother's life at risk. Before the bill was signed, NARAL Pro-Choice Ohio executive director Kellie Copeland called the legislation "a threat to women’s health" because it didn't make proper exemptions for the health of the mother, including in cases of fetal anomaly or a cancer diagnosis.

After signing the bill, Kasich's office released a statement that said: "Life is a gift from God and one way that we express our ongoing gratitude for it is by respecting it. This bill does that in a very fundamental way and I'm proud to have signed it into law." The fact that Kasich fully supported and signed this ban totally discredits his supposed newfound support for rape exemptions. Yes, there was a small exception for medical emergencies, but serious health risks were ignored, and protections for victims of rape and incest were left out entirely.

Kasich also signed the state's 2013 budget bill, which included a provision prohibiting state-funded rape crisis counselors from referring rape victims to abortion providers. If Ohio rape crisis clinics are caught giving women information about abortions, they could lose their funding. Such a restrictive law fundamentally contradicts Kasich's claim that he supports exemptions for abortion in cases of rape. If he wanted to give rape victims the right to choose, he would allow counselors to fully advise them on their options.

The other anti-abortion measures Kasich has signed into law (and there are a lot) have caused half the state's abortion clinics to close, making it even more difficult for women who were are pregnant because of rape or incest, or who have a medical emergency, to get the procedure. When he took office in 2011, Ohio had 16 abortion providers; now it has only eight. The latest anti-abortion measure he signed — which was snuck into the state's budget bill, just like the 2013 provision — requires that all abortion providers in the state have admitting privileges with a hospital no more than 30 miles away. Such a strict geographic limit puts two more clinics in jeopardy of closing.

With so few places to get an abortion, Ohio women are left with few options. If Kasich truly supported exemptions for abortion, he wouldn't severely limit the possibility of women actually getting the procedure when the exemptions apply to them.