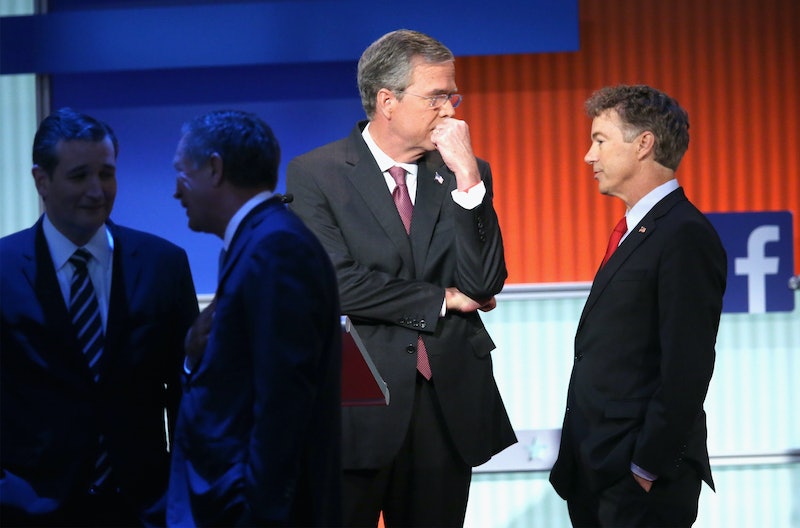 A Fox News poll released this past weekend showed a significant drop in numbers for onetime GOP favorites like Scott Walker, Marco Rubio, and Jeb Bush, signaling a concerning new era in Republican politics. According to the poll numbers, billionaire businessman Donald Trump still commands a generous lead over his counterparts with an overall voter tally of 25 percent — down just one point since July. Trailing behind Trump were former neurosurgeon Ben Carson and Texas Sen. Ted Cruz, who command around 12 and 10 percent of the vote respectively. At the bottom of the heap are candidates like former Virginia Gov. Jim Gilmore and former New York Gov. George Pataki, who each registered 1 percent or less — understandable, given their overall unpopularity with voters outside their home states who barely know them. Stuck in the middle, hovering between 4 and 9 percent on average, are party darlings like Walker and Huckabee, who previously held down concrete spots in the top tier. So why is the GOP suddenly falling apart?

Given that the pundits and pollsters all practically guarantee us that Trump won't win, it's becoming frustrating for those who see him as he really is to watch as he maintains an ironclad grip on the voter-base. Even with a bevy of inappropriate comments and all-around unprofessional behavior, which should have killed his campaign altogether, Trump's lead remains — and that's unsettling to say the least.

It's not just Democrats and Independents that are concerned either. A Pew Research Poll in late July showed that Americans as a whole had grown weary of the current Republican Party, leading to a drop in support for GOP candidates.

"Republicans, in particular, are now more critical of their own party than they were a few months ago," the Pew Researcher Center wrote. "About two-thirds (68 percent) express a favorable opinion of their party, the lowest share in more than two years. Six months ago, 86 percent of Republicans viewed the GOP positively."

What's causing the exodus? It shouldn't come as a surprise that the further the GOP swings to the right, the less the general public is willing to support it — and that's exactly what's happening now, amidst all the chaos of the 2016 primaries. But who's to blame? The candidates? The centrist-leaning newbies like Pataki? Probably not. New Jersey Gov. Chris Christie's "say what you mean" attitude? Doubtful. The aggressive push toward and anti-government, pro-gun, anti-compromise right wing by candidates like Cruz, Huckabee, and former Pennsylvania Sen. Rick Santorum? Ah — now you're onto something.

As candidate after candidate tries to one-up the others by making increasingly outlandish, offensive remarks, the Republican Party has essentially begun reclassifying itself as the Party of Trump. An eager belittlement of rivals, excited push-back against Democrats across the aisle, and an overall "non-PC" attitude have become its trademark — and candidates like Walker and Rubio, who, for the most part, refuse to play that game are getting left behind, to no one's advantage.

In May, for example, gay-friendly news publication The Advocate brazenly asked in one of its headlines, "Can the GOP Presidential Field Get Any More Antigay?" Turns out, it could.

Formerly jovial candidates like Walker called the June 26 SCOTUS same-sex marriage decision a "grave mistake" (which probably didn't sit well with his family, who supports it). Louisiana Gov. Bobby Jindal called it an "assault against the religious freedom rights of Christians." Leading the charge was Huckabee, who angrily remarked in a statement:

That type of rhetoric might sound great in a stump speech or on a viral twitter post, but for the majority of Americans who have come to genial terms with the idea of same-sex marriage, it was a smack in the head.

Jackie Calmes, a national correspondent for The New York Times and a fellow at Harvard University's Kennedy School of Government explained in a recent study, and in an interview with The Huffington Post on Sunday, that much of the perceived need to trudge further and further right could be attributed to the conservative media itself, which often fed that narrative to candidates (who in turn bought it hook, line, and sinker).

"Conservative media, having helped push the party so far to the antigovernment, anticompromise ideological right, attacks Republican leaders for taking the smallest step toward the moderate middle," said Calmes.

With once-trustworthy candidates like Carson and eager game-changers like Cruz suddenly turning on the zealous charm and making like Trump to get ahead, the only winners are those raking in the endorsements and donation money — or, in other words, those who are willing to speak over their rivals and compete for the title of "most offensive." The rest of the party, including its dedicated voter base, has been left in the dust.