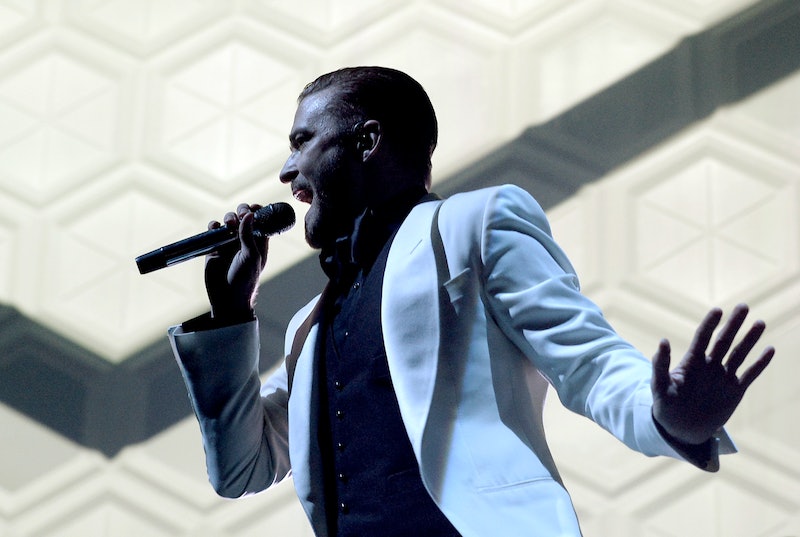 I think a reasonable 2014 New Year's resolution for all us over-achievers out there is to be more like Justin Timberlake. Dude is the definition of an overachiever. This is a man who could be resting on his laurels, confident in his abilities as a boy-band heartthrob, and instead he has launched a fairly successful acting career, become the only white guy Jay-Z will sing with, and married the physically perfect, athletic, articulate goddess that is Jessica Biel. Overachievers of the world: unite under the banner of JT once and forever.

While you're doing that, read the following list (because the great thing about most overachievers is that they're also excellent multi-taskers) of the best New Year's resolutions for our kind.

1. First, Write Down Some Goals

2. Get Damn Good At Something (that you're not already damn good at, obviously)

The classic New Years resolution (NYR, if you will) is to learn a new language, pick up a new hobby, perfect a new skill. But that requires a tremendous amount of time and effort, and few people actually do it. So what if, instead, you just became AMAZING at something you already like? Like billiards, or casual sex, or Spike Ball, or drinking whiskey, or making hollandaise sauce? And then, this time next year, you can wow friends, family, and your significant other with your delicious eggs Benedict or incredible drinking abilities or the fact that you are officially a pool-hall hustler.

3. Stop Using Your Phone As A Crutch

You're better than that. You already know so much, why Google something during conversation? You're so charming — why rely on your phone during conversational lulls? It's the equivalent of social smoking, you really just need something to do with your hands. Read a book. Learn to knit. Talk to the stranger sitting next to you. Buy a drink for the cute guy or girl across the bar. Get off Twitter.

No matter who you are, you could likely use a little more art/literature/music/movies/high concept/low concept/SNL in your life. Find things you like. Find things you hate. Take advantage of free concerts, student rates to museums, and books you discover at your parents house. At best, you'll find something to get excited about. At worst, you'll have a new tidbit of dinner party/office lunch conversation in your back pocket.

5. Stop Seeing Yourself As The Sum Of Your Accomplishments

You're more than what you've done, what you've published, who you've dated, what college you attended, or where you've traveled. You're more than a highlight reel or a "Greatest Hits" album. You're a person. Cut yourself some slack, and appreciate things like taking time off, or having a fun-but-going-nowhere job, or the stuff that happens when you haven't had time to plan out the best path. It's okay that you're 24 and still haven't landed a backflip/written the Great American Novel/solved the AIDS crisis. You've probably made some people laugh and/or had really good sex at least once. You're fine.

I don't care if it's a yopro dodgeball league or beer pong with buddies or pickup basketball or Never Have I Ever with the kids you nanny for. Play more games. There are not enough excuses to laugh, compete, and make a fool of yourself all the same time. Organize weekly sloshball games. Befriend someone with a ping pong table. Start golfing (actually, don't start golfing). There's a reason recess was the best part of elementary school, and every adult on the planet could use a little more of that.

I find other people incredibly fascinating. I think we would get so much more done as a society if we just lost a little bit of brain-mouth filter and actually talked to the people we've never met that are swarming around us at every hour of the day. Ask people questions. Smile back. Be nice. Pretend you're in Pay It Forward if you have to. There are friends to be made and lessons to be learned.

If you drink, great. If you don't, that's great too. Regardless of your substance habits or preferences, the idea is to maximize the level of fun-having. To quote Hunter S. Thompson (and I think he'd know): “Life should not be a journey to the grave with the intention of arriving safely in a pretty and well preserved body, but rather to skid in broadside in a cloud of smoke, thoroughly used up, totally worn out, and loudly proclaiming "Wow! What a Ride!”

9. Find Something You Are Really, Really Bad At. Then Do It Every Once In A While

This is important. It is easy to forget that you, a 20-something with great hair, a decent body in spite of the desk you sit at, a good job, and quality friends who would (literally) bend over backwards for you, are a mere mortal. But, in fact, you are. You are bad at things. Like, really bad. And these are things you don't like to do, because you (self-realized thing that you are) recognize that you suck at them. Overachievers of the world: let's embrace the stuff we are awful at. Not all the time. Not even often. But sometimes. Occasionally. Whether it's skiing, poker, going to a bar by yourself, or putting on eyeliner, sometimes you just need to do that thing you're bad at to remind yourself that no human is good at absolutely everything and even if that person existed they would be mind-numbingly boring (though probably wouldn't get hangovers).

10. Live The Dream (preferably yours)

I am so serious. It sounds like I need to put a dollar in Schmidt's "Douche Jar", but I mean it. If you can consistently answer "living the dream" when someone asks you how you are, it morphs from unbelievably annoying to "Wow, what does she do with her life and why is she always so happy/positive/successful?" There is no shame in striving to be that person.

More like this
13 Summer Solstice Quotes To Celebrate The Longest Day Of The Year
By Sadie Trombetta
The Summer Solstice Spiritual Meaning, Explained
By Jessica Booth and Brittany Beringer
All The Astrological Events Happening In July 2022
By Nina Kahn
4 Zodiac Signs That'll Have The Luckiest July
By Brittany Beringer
Get Even More From Bustle — Sign Up For The Newsletter