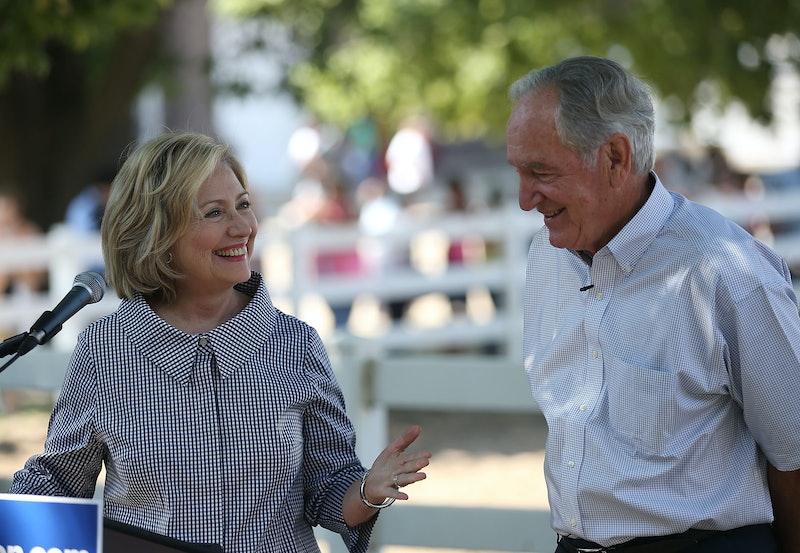 While she was mingling with potential caucus voters at the Iowa State Fair last weekend, Hillary Clinton got the endorsement of former Iowa Sen. Tom Harkin, which was touted as a very big deal. Harkin is still popular in the Hawkeye State, and his endorsement is coveted by Democrats, even though his ability to predict a winner isn't always rock solid. He chose Bill Clinton both times he ran and endorsed President Obama over Hillary in 2008, but opted for Howard Dean in 2004. But do endorsements actually matter to voters?

The short answer is that endorsements tend to matter little to most voters, at least, that's what they'll say when asked. But receiving the support of a popular local politician can have short-term impact on polls, which can give candidates a much-needed boost. Harkin is a good example of someone whose political clout can buoy a candidate. And often it matters more not who the endorser is, but where they're from. On Monday, it appeared that Ohio Gov. and GOP candidate John Kasich would get the endorsement of Robert Bentley, the governor of Alabama. It's not an early primary state and doesn't even have that many electoral college votes, so why should Kasich care about Alabama? The Washington Post explains an endorsement from Bentley could demonstrate that Kasich can appeal to voters in the South, not just the Midwest, where he governs, and the Northeast, where he's from.

Candidates in local and presidential races also spend a fair amount of time wooing the editorial boards of major newspapers. In 2012, Barack Obama received 41 endorsements from the country's top 100 newspapers. Mitt Romney received 35, and 23 papers offered no endorsement, with one split decision. Even though newspaper endorsements usually become a big part of a candidate's advertising late in a presidential campaign, it doesn't seem like voters are overly impressed by them. During the 2012 campaign, NPR surveyed Ohio voters to see if the endorsements of The Columbus Dispatch (Romney) and The Plain Dealer in Cleveland (Obama) had any influence on their choice. The answer was a resounding "no." One voter said, "My opinion is as valid as the editor of the newspaper."

It's arguable that newspapers' endorsements aren't viewed as significant by voters because newspapers themselves have struggled to remain relevant amid ad revenue declines and the rise of digital media. Still, some recent presidential endorsements by newspapers have at least raised eyebrows, like when The Salt Lake Tribune, which is at the very center of the Mormon church's stronghold, picked Obama over Mitt Romney, a member of the Mormon church.

For Democrats, the endorsements of labor unions, particularly that of the enormous AFL-CIO, also are heavily coveted, as their members are seen as stalwarts who regularly turn out at the polls in high numbers. Celebrity endorsements have come into play in recent elections as well; among the current crop of candidates, Clinton is way ahead, with 30 celebs on her side (I mean, she has Beyoncé and Lena Dunham in her camp and took a selfie with Kim Kardashian, come on!). Among Republicans, Mike Huckabee leads with three kinda odd endorsements: Chuck Norris, Tony Orlando, and the Duggar family.

Whether or not voters can be swayed by endorsements may never really be known for sure; as the Post reports, most voters like to think of themselves as independent-minded and likely would not want to admit to being influenced by a newspaper, a politician, or a celebrity. But seeking and winning (and boasting about) endorsements is an ingrained part of the American political process. When it comes down to it, though, everyone goes into the voting booth alone and has to make up their own mind.