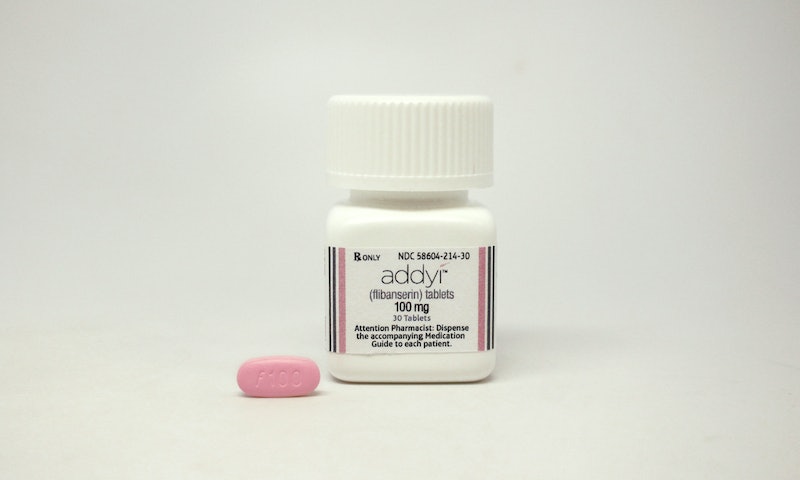 On Tuesday, the FDA officially approved flibanserin, which is also known as the "female Viagra" or the "little pink pill." The first of its kind, this drug is designed to boost low sexual desire — a condition called Hypoactive Sexual Desire Disorder — in otherwise healthy women.

Back in June, a key FDA advisory committee voted 18-6 to recommend that the organization approve the drug. Flibanserin was originally developed as an anti-depressant, but it also works on neurotransmitters in the brain that impact sexual desire. The FDA had previously rejected the drug twice, on the basis that its side effects — like sleepiness, dizziness, and nausea — outweighed its effectiveness. However, when the advisory committee heard the emotional testimonies of women with HSDD ahead of its June vote, the majority of members said that even though the drug only has a "moderate" benefit, it would be better than nothing.

This could be a gamechanger for women with HSDD, according to Dr. Holly Thacker, a women’s health specialist at Cleveland Clinic. Andrea Bradford, an assistant professor of gynecologic oncology and reproductive medicine at MD Anderson Cancer Center, told Time that the drug might be greeted with particular enthusiasm by cancer survivors, many of whom experience a loss of sexual desire as a long-term side effect of their treatment.

Another controversy leading up to the FDA's decision had to do with officials worrying over how flibanserin might interact with other medication, as well as about its potential risk of encouraging breast cancer. But there's another element to the opposition here. It's important to note that while the drug has been called the "female Viagra," it is different from Viagra in many important ways. As Igor Volsky and Victoria Fleischer wrote for Think Progress, "Viagra rushes blood to the penis, flibanserin tries to convince the brain to desire sex." This means that while men take Viagra when they want to have sex, women would have to take flibanserin on a daily basis.

While the FDA's decision is a historic moment for women's sexual health, women should also be cautious in their enthusiasm. After all, back in June, many members of the FDA's advisory committee made it clear that their votes in favor of flibanserin were conditional, particularly because they wished the drug was better.

More like this
How Ovulation Affects Your Sense Of Smell, Libido, & More
By JR Thorpe and Lexi Inks
Here’s Where The NHS Nurses’ Strike Currently Stands
By Sophie McEvoy
Watch Jacinda Arden’s Devastatingly Honest Resignation Speech
By Sam Ramsden
Gen Z Are Twice As Likely To Identify As Queer, According To New Data
By Sam Ramsden
Get Even More From Bustle — Sign Up For The Newsletter
From hair trends to relationship advice, our daily newsletter has everything you need to sound like a person who’s on TikTok, even if you aren’t.