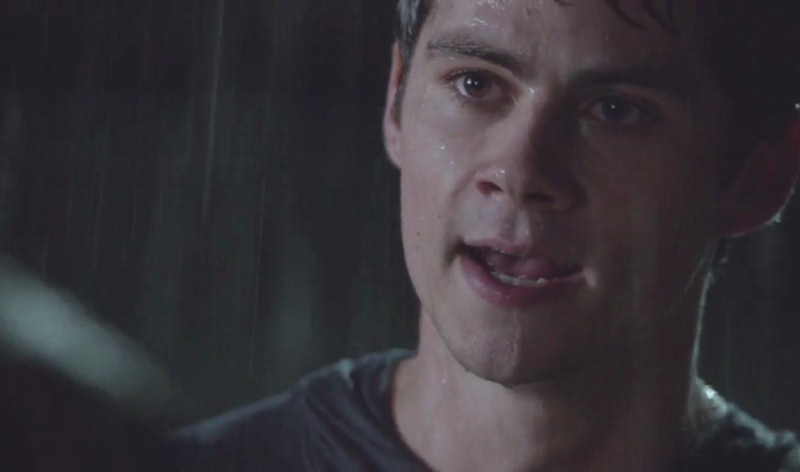 This cannot be happening. I cannot accept this fellow Teen Wolf fans. On Monday night's episode of the hit MTV series, Scott and Stiles' relationship began to sever and crumble, all thanks to the dirty lies and tricks played by Theo. Seriously, this guy is the worst. Not only did he tell Scott that Stiles purposefully murdered Donovan by hitting him multiple times with a wrench, Scott believed him and chose to trust Theo more than the members of his own pack. It's been a difficult season so far for Scott McCall and while I can't fault him for falling into the traps and horrible events caused by the Dread Doctors, I do want to fault him for not doing the one thing he's always tried to do in the past: Stay loyal to his pack, his friends. Because he's allowing himself to be tricked by Theo, he might now lose his best friend. Are we really seeing the end of Sciles?

Monday night's episode, aptly titled "Lies of Omission," began with Scott's voiceover explaining that his asthma was back and that he was so afraid of what is happening to his pack and to everyone he loves. He stated that his friends would go through the school not talking to one another because "not talking makes it easier to keep secrets." We find out that Scott is telling Theo all of this, and of course Theo assures Scott that he still wants to be a part of Scott's pack. Theo tells Scott that he's with him for better or worse, and Scott replies that it's going to be more worse than better. Theo then replies ominously, "I'm counting on it." If that's not enough to make someone suspicious, I'm not sure what is.

When Lydia tells Stiles that she thinks it's time to let Parrish know that he's taking the bodies, Stiles gets worried that everyone will find out that he had to kill Donovan out of self defense. He speaks to Theo on the matter who tries to assure Stiles that Scott will understand what Stiles had to do without judgment. But before Stiles can tell Scott the truth, Theo jumps in and gives Scott a totally inaccurate rundown of the events. He tells Scott that Stiles essentially beat Donovan to death out of spite for his father's safety or for some other reasons. Theo leaves that part up in the air to create a seed of doubt in Scott's mind. But of course Theo also conveniently forgets to mention the chimera he killed.

When Stiles and Scott finally speak to one another in the episode, the damage has already been done, Scott already doesn't trust his friend. Scott tells Stiles that there is a line between self defense and murder and that the way Stiles killed Donovan no longer seemed like self defense. Given that Stiles doesn't know that Scott is not aware of what really happened, all he can say in his defense is that Donovan was going to kill his dad. And the heartbreaking moment is when Stiles moves forward to get Scott to understand him, Scott backs away from his best friend in a move that seemed like for the first time Scott was afraid of what Stiles might do out of anger and violence. That had to be the straw that broke the camel's back, and to make matters worse, Scott refused to say he trusted Stiles.

I'm not sure how the BFF's can come back from this. There is a real level of trust that was broken by both parties, especially Scott for trusting the manipulative Theo over his best friend of so many years. Scott is quickly losing control and loyalty of his pack, which seems to be Theo's plan as he told the Dread Doctors he wants a pack of his own. But what will that achieve? And what are the Dread Doctors achieving by killing their chimeras and creating new ones? Seriously, I've bot way more questions than answers for Teen Wolf right now, and it's killing me.