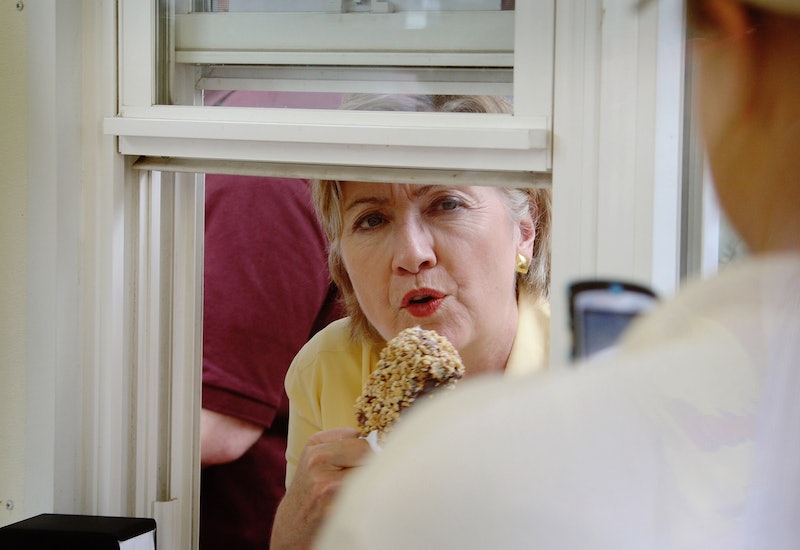 Even though they all rock private helicopters, have personal assistants, and are making a grab for the highest office in the land, the 2016 candidates really aren't that different from us. Sure, they have millions of dollars in cash at their disposal, and their every movement is scrutinized. But underneath, people are people, and these candidates deserve to be treated just like any one else.

Like us, they get embarrassed when they mess up. They get easily annoyed sometimes, and try to laugh when things go wrong. They go through the same trials and tribulations that we do, like having to show up for the hell that is jury duty. And as annoying as jury duty can be on a normal day, imagine jury duty while being surrounded by hundreds of people trying to take your picture and talk to you. And then getting into the room to wait for a thousand hours to see if you're called, and knowing that everyone in the room is taking Snapchats of you on the sly. That sounds like hell.

Which is why we should cut them some slack. People are people, no matter how obnoxious their politics and platforms may be. In addition to waging campaigns and vying for the title of head honcho, these candidates are just trying to live, just like the rest of us. And they go through the same struggles.

They Just Want To Snack In Peace

Poor Scott Walker. First he got mocked for ordering American cheese instead of cheese Whiz on his Philly cheesesteak. Then, some protester told him he sniffed his own poop. Just let the guy eat his sandwich in peace.

They Get Overly Excited About Their Game Of Thrones Theories

They Hate Public Transportation As Much As We Do

And they feel just as uncomfortable as we do when shoved on the Metro after a Nationals game. But massive points to Rand Paul for not man-spreading.

There is nothing worse than being in an argument and trying to hold your tongue, even though you know how emphatically wrong everyone else around you is. Carly Fiorina gets it.

They Understand The Burning Desire For Chipotle

Sometimes a girl just needs an extra side of guac. And she doesn't need to be judged for it.

They Hate Group Messages As Much As We Do

Don't worry, Lindsey Graham, we've all felt the desire to take a butcher knife to our phones.

They Struggle To Stay Hydrated

Who has time to drink that much water every day? Marco Rubio totally understands the struggle of staying on top of your water intake.

They Sometimes Wave At Someone Who Wasn't Actually Waving At Them

"BRB gonna go burn off my hand in shame and pretend that never happened."

Who hasn't added a few too many exclamation points to an email to avoid sounding angry? That is probably the entire idea behind Jeb Bush's campaign logo.

Sometimes They Get Headaches Listening To Politicians

If any candidate were likely to admit it, it would be Bernie Sanders. Actually, I think he has said it.

They Get Really Geeky About Their Passions

Ben Carson's campaign slogan is literally a doctor joke. And his brain jokes are kind of great. I don't even care if he reuses them. It's beautiful to see politicians geek out, just like us.

Everyday, the 2016 candidates are getting out there and trying to prove that they're normal people, just like the rest of us. Eating food, breathing air, craving Chipotle — isn't it crazy how similar we all are? I wonder what they'll do next.