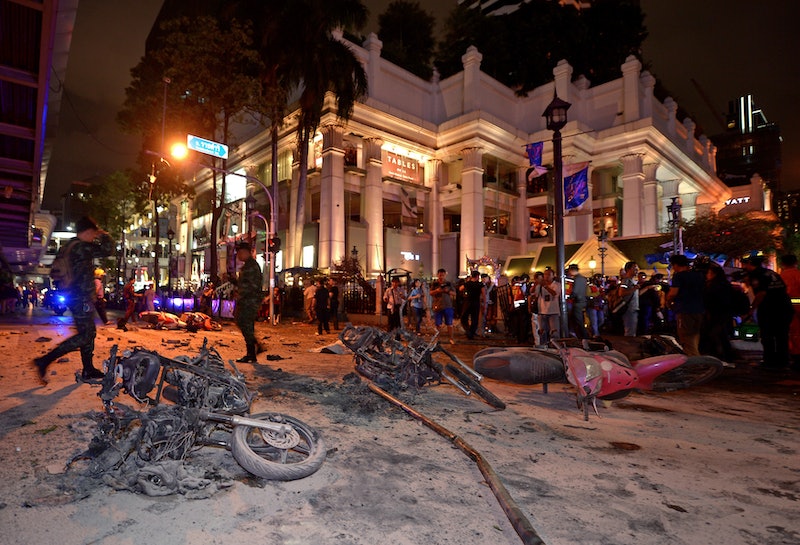 Authorities are looking for a man suspected in carrying out Monday's deadly bombing in Bangkok near the popular religious hot spot Erawan Shrine that killed at least 20 people, eight of whom were foreigners, and injured another 123. So who is the Bangkok bombing suspect? Officials have yet to identity a specific individual or group who may have been responsible for the attack described by Prime Minister Prayuth Chan-ocha as "the worst incident that has ever happened" to Thailand. But newly released surveillance images may provide the first look at the person who authorities claim could be at least one of the people behind the horrific attack.

Police Commissioner Gen. Somyot Poompanmoung told reporters the suspect's identity is currently unknown and it's unclear whether he is a a foreigner or Thai citizen. "We need more evidence before we can make any conclusions," he said at a news conference. Poompanmoung also added that officials were gleaning through roughly 10 days of surveillance footage culled from the surrounding area.

In footage captured by closed-circuit television, a man wearing a bright yellow T-shirt with a front graphic, dark knee-length shorts, dark shoes, and dark-rimmed glasses. In one of the two images released, the man is seen wearing a backpack at the time of the incident. A later image shows the man walking without the suspicious bag, officials said.

While authorities are hunkering down on one possible suspect, the possibility of more than one person being involved is high, said Dr. Panithan Wattanayakorn, adviser to the Thai defense minister. He told reporters, "We believe that there was more than one person who came in the area and planted the bombs, but at least one person is very clear on the CCTV, and this is a very busy intersection, happening at rush hour, so we are having the benefits of a lot of witnesses in this regard."

Thailand has been under military rule since last May, when a coup ousted then-Prime Minister Yingluck Shinawatra. The country has long experienced internal strife, so it's currently unclear whether there was an outside agenda behind the bombing. According to NBC News, more than 6,500 people have been killed in the country's most southern provinces, where a Muslim separatist insurgency has long taken place. But that conflict has largely remained contained in the region, and officials said the bombing did not appear to match known rebel tactics and methods.

Monday's events has put the Southeast Asian country, a popular tourist destination, on edge. The last bombing in Bangkok before Monday's attack happened in 2012, when Iranian nationals attempted to assassinate Israeli diplomats. And just one day after the bombing, another small explosion took place Tuesday near a train station in central Bangkok 1 p.m. local time, though no injuries or deaths were reported.