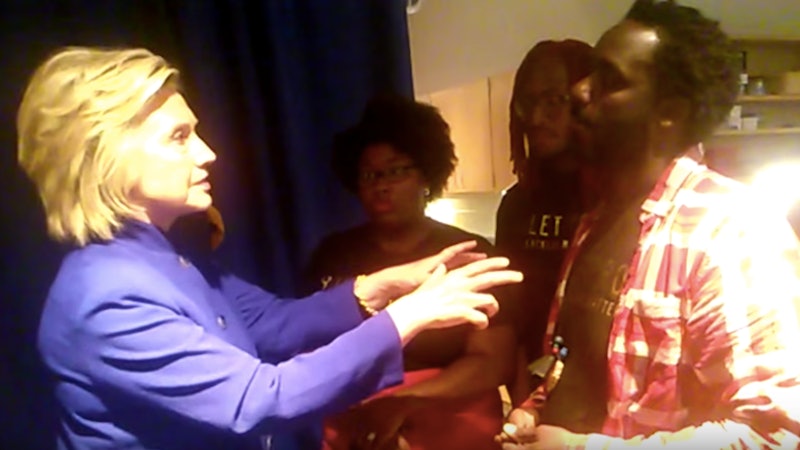 Presidential candidates largely avoided addressing race relations during the early months of their campaigns, and that was a fact that didn't sit well with the influential Black Lives Matter movement. In the last month, we've seen the civil rights group refuse to be ignored on the campaign trail, sometimes literally taking the microphone away from candidates like Vermont Sen. Bernie Sanders. During an Aug. 11 stop in Keene, New Hampshire, five Black Lives Matter activists were shut out of an event for Hillary Clinton, but they were later allowed to speak with the Democratic front-runner behind closed doors in what may be her first direct encounter with the social movement. Now, video exclusively obtained by Good Magazine shows a tense exchange between Hillary Clinton and Black Lives Matter activists as the Democrat challenges the group to figure out concrete solutions for the country's race problem.

The whole talk starts relatively comfortable. In the first part of the video, one man, Julius Jones, eloquently lays out the United States' blemished history in mishandling race, whether through slavery, segregation, or institutionalized racial bias in the justice system. He pointedly questions Clinton about her past support for laws, such as the Violent Crime Control and Law Enforcement Act (which husband and then-president Bill Clinton signed into law in 1994 and recently admitted was wrong) that helped contribute to today's astonishingly high mass incarceration rates, particularly of young black men.

After going through the typical rah-rah candidate sell, Clinton tells the activists the Black Lives Matter movement needs to start looking past rhetoric about the country's "original sin" of slavery and work with lawmakers to figure out concrete solutions in policy and develop a "positive vision and plan that you can move people toward."

Your analysis is totally fair. It's historically fair, it's psychologically fair, it's economically fair. But you're going to have to come together as a movement and say, "Here's what we want done about it." ... The consciousness raising, the advocacy, the passion, the youth of your movement is so critical, but now all I'm suggesting is even for us sinners, find some common ground on agendas that can make a difference right here and now in people's lives.

Her advice doesn't seem to satisfy Jones, who says in a Part 2 video, "If you don't tell black people what we need to do, then we won't tell you all what you need to do." Clinton becomes slightly bullish and insists she wants to work together, but he says the issue lies in the "white problem of violence," which the black community doesn't have the tools to stop. (By the way, let's not play into the "angry black man" stereotype. The guy is calm and makes it a point to repeatedly sprinkle the word "respectfully" while he talks.)

She takes the sarcastic route — "Well, 'respectfully,' if that is your position, then I will only talk to white people about how we are going to deal with the very real problems" — which prompts Jones to push back and contend that what Clinton posited to them was a form of "victim blaming" by telling the movement what it needed to do to "change hearts." That's when Clinton breaks composure and interrupts.

Look, I don't believe you change hearts. I believe you change laws, you change allocations and resources. You change the way systems operate. You're not going to change every heart. You're not. But at the end of the day, you can do a whole lot to change some hearts and change some systems and create more opportunities for people who deserve to have them. ... You can keep the movement going which you have started, and through it, you may actually change some hearts, but if that's all that happens, we'll be back here in 10 years having the same conversation because we will not have all of the changes that you deserve to see happen in your lifetime.

The whole situation diffuses after that, with neither party offering so much as a handshake. The influence of the Black Lives Matter movement in the past year is undeniable, and if it wants to take this guerrilla approach in breaking into the election season, that's fine by me. But although she could have probably handled the talk a little better, Clinton has a point. Getting six Baltimore cops indicted for their roles in Freddie Gray's death is a victory, sure, but only when the larger justice system is fixed will that become the rule rather than the exception. Black Lives Matter, in a way, has outgrown its grassroots origins to become a politicized group capable of wielding heavy sway over the national conversation. It's time the movement goes to Capitol Hill and makes the permanent changes it's calling for.

More like this
How To Support Gun Control Reform Right Now
By Morgan Brinlee and Carolyn Steber
34 Quotes That'll Inspire You On Juneteenth & Beyond
By Syeda Khaula Saad and Siena Gagliano
How To Fight For Reproductive Rights, Based On How Much Time You Have
By Courtney Young
17 Powerful Photos From March For Our Lives Protests Across The U.S.
By Michelle Toglia
Get Even More From Bustle — Sign Up For The Newsletter