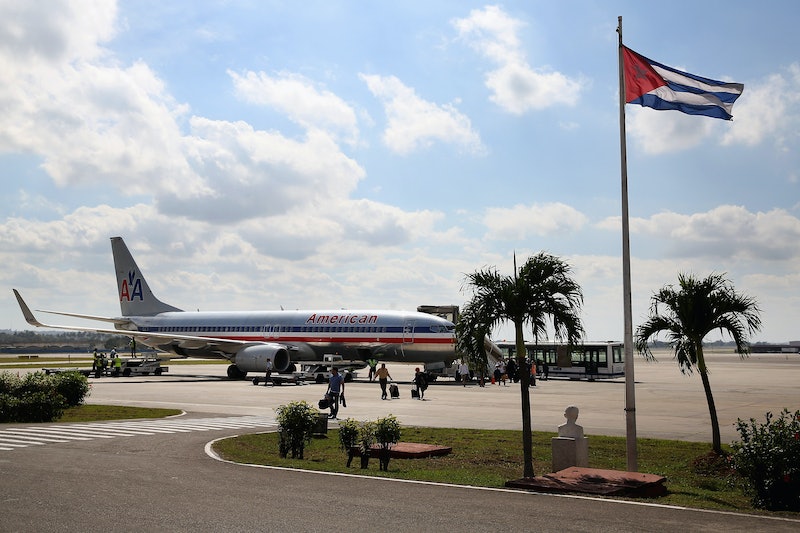 Taking an unobstructed — and totally legal — vacation to Cuba may be a possibility come winter. New Years in Havana? Yes, please! American Airlines announced Tuesday it will offer flights to Havana from L.A. starting in December, becoming the first U.S. airline to provide service between the West Coast and Cuba. Although these flights will only be chartered service, regular commercial airline service between the United States and Cuba is currently in the works, with delegates from both countries reportedly negotiating a travel deal that could open up pathways for legal leisure travel for the first time in five decades.

American Airlines, which is the leading U.S. airline serving the Caribbean, already offers charter flights between Miami, Tampa and Cuba. The airline launched the special flight service in 1991. "American Airlines has operated charter flights to Cuba for nearly 25 years and we stand ready to begin scheduled service when it's allowed," CEO Doug Parker said last month in a statement.

American's new route will be the only charter flight to Cuba from the West Coast. "This new charter flight shows how we continue to expand our reach by offering new routes and services our customers want," Art Torno, senior vice president of American Airline Mexico, Caribbean and Latin America, said Tuesday in a statement.

The inaugural flight route will be offered only on Saturdays beginning Dec. 12. The airline has yet to release the flight times, but did say it will use a Boeing 737-800, which can fit about 160 passengers.

So far, only one other major U.S. carrier has opened up direct flights to Havana following the restored diplomatic relations between the United States and Cuba. Shortly after President Obama lifted the harsh travel restrictions in May, JetBlue announced it would offer weekly direct service between John F. Kennedy International Airport in New York City to Havana. JetBlue held its inaugural flight on July 3. It was the first flight to Cuba departing from New York in five decades.

There's still only 12 authorized reasons for Americans to travel to Cuba at this time, but open travel and commercial flight service may become a reality in the near future. The Wall Street Journal reported this week that the Obama administration is trying to reach a deal with Cuba to resume regular commercial flights between the two former foes. U.S. officials reportedly want to lift the remaining travel restrictions on Americans, allowing for full commercial travel to Cuba and restored economic ties. Although a 50-year-old Congressional ban on travel to Cuba is still in place, WSJ sources said the president and his administration are looking to circumvent the ban by opening up other avenues, including regular commercial flights to the once off-guard nation.