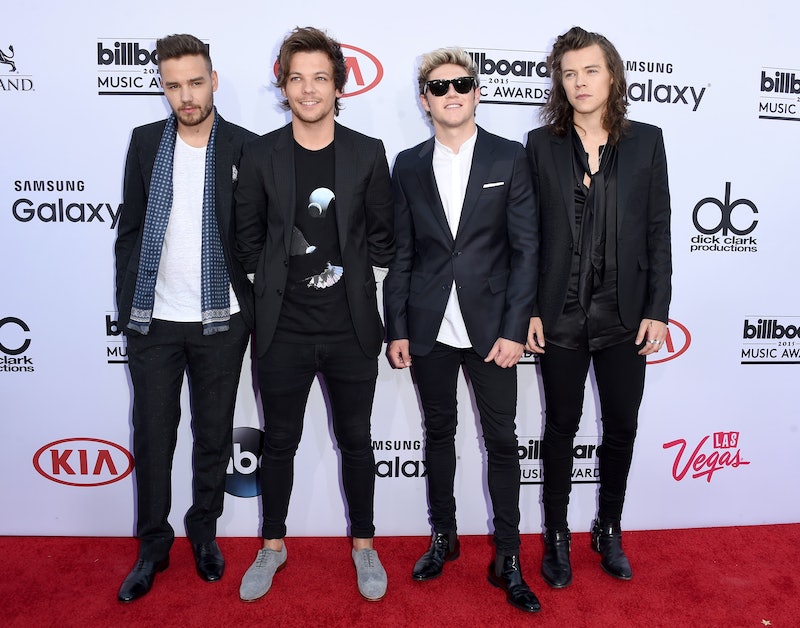 In general, I consider myself an optimist, but I have to admit that when Zayn Malik left One Direction, I was pretty sure that Louis Tomlinson would either follow right directly behind him or be the next to go. Not because that's what I wanted, because it isn't, those two just seemed so close, and so weirdly separate from the other guys, Niall Horan, Harry Styles, and Liam Payne, that I worried Malik detaching would trigger a domino effect that would eventually pull the whole band apart. Tomlinson was a big part of that theory, and so far, he's defied my expectations. And never more so than on Tuesday, when I saw that Louis Tomlinson sided against Malik in his feud with Calvin Harris over Taylor Swift. Whaaaaat?

OK, I'll slow down, because I'm throwing around so many of the top names in the pop music world that even I'm getting confused. The reason Zayn Malik is even in a position where people need to side with or against him is because of a post he retweeted that made an unfavorable comparison between Taylor Swift and Miley Cyrus. The post shades Swift because she'd been quoted saying she removed her music from Spotify because she didn't feel that she — or other artists — were being adequately compensated, while Cyrus has gone on the record saying she doesn't care if people buy her album, because she's already made her money. It seems to have been deleted now, but here's a screenshot another Twitter user took, because 2015:

Swift herself seems not to have responded, which is great because GIRL DO YOU SERIOUSLY WANT ME TO APOLOGIZE FOR BEING A PROFESSIONAL AND DEMANDING TO BE PAID AS SUCH, but her rumored boyfriend Calvin Harris did, and while he didn't directly mention Malik's name, it's pretty obvious what he was talking about:

Harsh language, but I can't say I disagree! But what I'm really interested in is the fact that Tomlinson sided with Harris and not Malik, as evidenced by the fact that he favorited Calvin Harris' tweet. And as you can see from the stats on his page, he's only favorited something 29 times before.

So, apparently the tides are turning a bit over in the 1D camp (either that, or Tomlinson has just very wisely figured out that Swift and Harris are not people he wants to eff with), which is excellent news. It means the remaining lads will likely stay together, Malik will likely tire himself out starting random feuds across the Internet, and life will go on largely as we know it.

More like this
Harry Styles Helped A Fan Come Out As Gay In Dramatic Fashion At His London Show
By Jake Viswanath
Watch Harry Styles’ Sweet Reunion With His Primary School Teacher
By El Hunt
The First 'My Policeman' Trailer Features Harry Styles & Moody Romance
By Grace Wehniainen
Adele’s All-Female Lineup Includes Kacey Musgraves, Mahalia, & Self Esteem
By Shahed Ezaydi
Get Even More From Bustle — Sign Up For The Newsletter