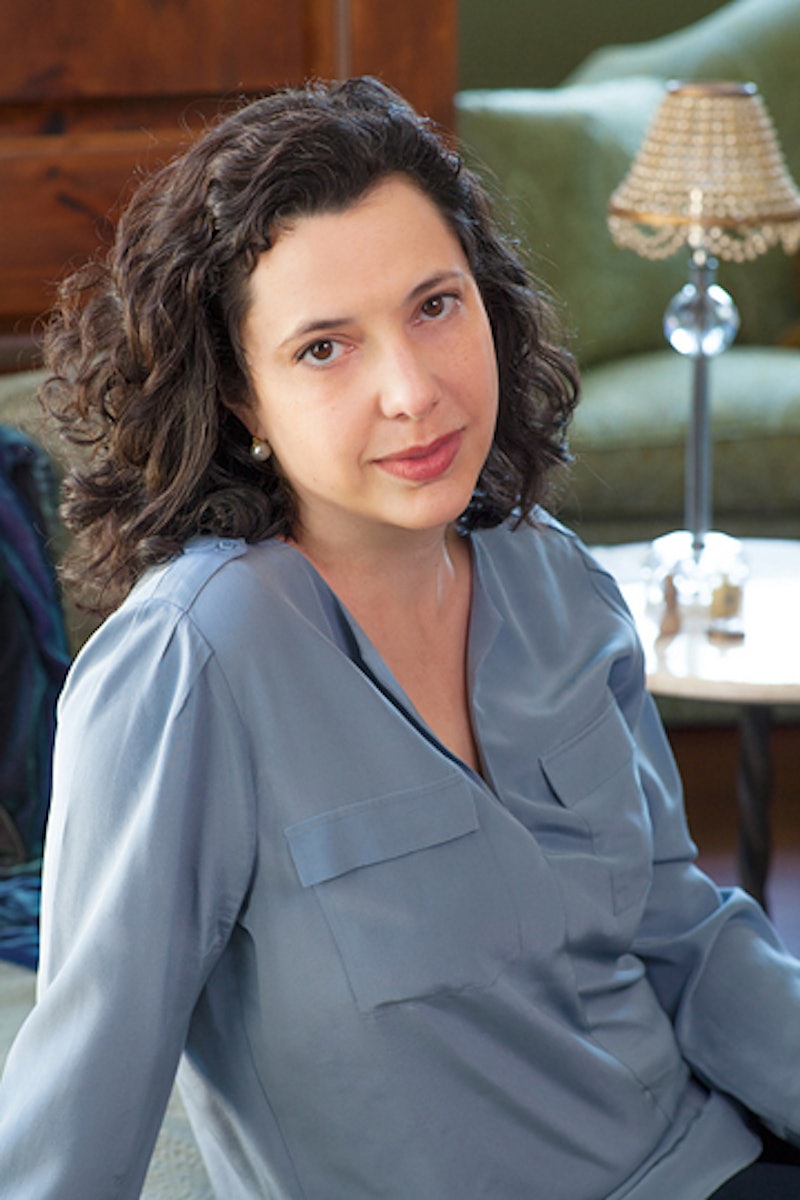 I didn't expect that, after spending two days immersed in debut author Anton DiSclafani's The Yonahlossee Riding Camp for Girls (Riverhead), I would not feel ready to leave the world of camps and horses and adolescent girls. But I wasn’t. I was immersed in this surprisingly sensual and suspenseful novel, which surpasses crushes and evening horseback rides to explore the themes of power, secrecy, sexuality, feminism and uncertainty in a new era.

The novel opens with the ardent and strong-willed heroine, Thea Atwell, arriving at the Yonahlossee Riding Camp for Girls (which has developed into a year round school) after being sent away because of an unnamed incident that occurred back home. DiSclafani intricately unravels the whole story, alternating between main character Thea at camp and flashbacks to her life back home. Being away from home for the first time, instructed to repress any inkling of sexuality or non-conformity, and living in a time of economic turmoil on the cusp of the Great Depression is–shocker–difficult and confusing. On the book's birthday, I talked to Disclafani about the novel (which recieved a coveted rave from Michiko Kakutani–happy release-day present, indeed).

BUSTLE: Yonahlossee is a real place, but you have stated that the novel is 100 percent fiction. How did you pick that name?

ANTON DISCLAFANI: My family had a cabin in Valle Crucis, North Carolina, just a few miles from where the real Yonahlossee used to be. I was just really taken by the place and how beautiful it was and the mountains and I couldn’t separate the name of the place from my idea of the place. It would have been really hard for me to write it I had to call it something else. So the name was just really central to it for me.

What did you take from the actual Yonahlossee?

I do think it was a bit odd to take the name when the book was not at all about the real camp, but the real camp was called Camp Yonahlossee and mine was The Yonahlossee Riding Camp for Girls. But I do take a few things: I take the setting, I take that it was a girl’s camp, and the main house is called the castle and it was in real life too.

Did you attend camp growing up?

I did! I attended Camp Graystone which is a girls camp outside of Ashville, North Carolina, but I only went for two summers so I didn’t have the same intense camp experience that some girls have where they go from the time they were little and then become counselors.

No! I think when my parents read Yonahlossee they were like “huh.” It was nothing like Yonahlossee; it was your standard girl’s camp where there were a lot of water sports and pottery.

So more pottery and less sleeping with the headmaster?

Part of what made Thea Atwell such a compelling heroin to me was her combination of positive attributes, such as her determination and passion, and her consistently self-destructive behavior. How did Thea evolve into the character that she is?

She was always self-destructive. I’m not interested in writing about someone who is just good and I don’t think that many books with purely good people exist. I wanted to write about a person who was really complicated, like we all are, but had certain historical pressures acting on her, and have those two things combust and create someone I was interested in writing about.

What parts of Thea are unique to the fact that she does have those historical pressures?

So, so much. It would be one thing even if this book was in the 1960s when people were starting to become aware of feminism and aware of women in a way that they never had before. I think that the book would have been different; Thea would have been at least able to acknowledge what was going on inside her. But as it was, Thea had all of these desires and influences but nothing to call them and no way of articulating them to herself. It was an extra-complicated place to be in.

Are there any other reasons you set the novel during the 1930s?

I wanted to put Thea in a time and place when things were changing and women were getting more rights. Especially in the twenties. I mean that was a pretty freewheeling time! Then the depression comes and kind of puts a stop to that and things started getting more conservative, so it was an interesting time to be a women and I wanted to capitalize on that. But it was also just a devastating time to be a person. I set the book on the front end of the depression because I wanted to get into that moment where people thought that the worst had come and things were going to get better. Of course, reading it you know that things are going to get a lot worse. So reading it there’s that sense that the axe is about to fall but none of them know it.

You’ve mentioned before that you and Thea are very different in many ways. Can you speak about that?

I am not fearless. I am always assessing risk in my environment. Even in walking from my apartment to my car, just everything and in every way I am assessing possible harm. And that was one of the things I really liked in writing about Thea, that she’s just so utterly fearless. But in a way, because I am just so constantly aware of risk, it was easy for me to tap into that even though I was tapping into a void of a quality I have. I don’t know this, but I think it would have been more difficult for someone who was totally fearless to write about a fearless character in a way that makes it seem real to someone who is fearful. If you can’t see or experience fear it is hard to write about it.

I have never written from real life. All the characters that I write evolve and are not based on everybody. Certainly, some of me is in every character, but in some ways it would be harder to write about a character that was an incarnation of myself because that would be writing nonfiction a little bit. Nonfiction is so difficult in that you constantly have to check what you’re writing with the reality of what exists. So I think that would be harder.

One thing you and Thea do share in common is your love of horses. Did you put your own experiences with horses into the novel?

When I was initially thinking about the book I was trying to think about what would make the ideal childhood and one of those things was 24-7 access to a horse so I put that in there. The horses really evolved as I wrote and became more and more a part of the book. They are a way for Thea to be brave and are an outlet for a behavior that would be otherwise considered inappropriate. This is not something she realizes, but it is something that became clear to me as I wrote the book.

How did the structure of the book develop? Did you write it with flashbacks from the beginning or plan it out chronologically?

I always wrote it with the flashbacks. The way Thea’s mind operates in my head is that she is able to close off parts of her brain when she wants to and not think about things that are painful in order to survive in camp. So it makes sense in the way that Thea thinks about the world. She could only think about certain things as she grew as a character and a person and as her mind was able to handle certain things.

I don’t think it would have worked with every character. If there was a character who was obsessed with what had happened then it would just feel too much like the author’s hand in there withholding. But she [Thea] seemed able to do that.

I was fascinated by all the secrecy in the novel. Why did you choose for secrecy to play such a role in the novel and to reveal the truth so slowly?

It was just my impulse to have a lot of secrets in the world. Unless you know someone from birth and are with them from birth there are always secrets that people have and the way that we interact with the world I see as a way we decide to parcel out our secrets and who we decide to parcel them out to. So going off that, secrets aren’t always as dramatic as Thea’s. The way that secrecy works in the novel is just an amplified way that they work in everyone’s lives, the way I see it.

So do you see a problem in human nature to keep secrets?

There are certain things we all withhold from other people or certain people. I have a friend that likes to say complete honesty is for children; there is no way to be completely honest. The people who are like, “I am 100 percent honest” are the people who end up being rude because they think they are entitled to say whatever they want. So some secrets are bad, but they’re just kind of inevitable.

Power is a big theme in this novel. Do you think people’s actions are often driven by seeking power or control over their lives?

Yes, I do. I think it is impossible when you are in the situation to understand exactly how you lack power. Thea feels that she lacks power in this really incredible way, but she can’t look into the future in 100 years and understand exactly how little power she has in that moment. The interesting thing is that she is a dominant person. She is someone who gets in trouble in her context because she seeks.

Was it your hope to write a broad-reaching, broadly-appealing novel?

No! When I was writing I was worried that it was too specific–like, who was ever going to care about this world of girls and horses? Since this was my first novel, I wanted to sell the book but I had no idea what that entailed. That it had elements of it that make it marketable is just a totally happy accident; I mean it was a great accident!

How did you celebrate the publishing of your book?

I’ve been making my husband run errands with me. I told somebody that and they were like “oh no,” but it’s fun! I like running errands and he usually won’t come with me! But we did have a nice lunch and the more celebratory thing is that I am going out with friends tonight.