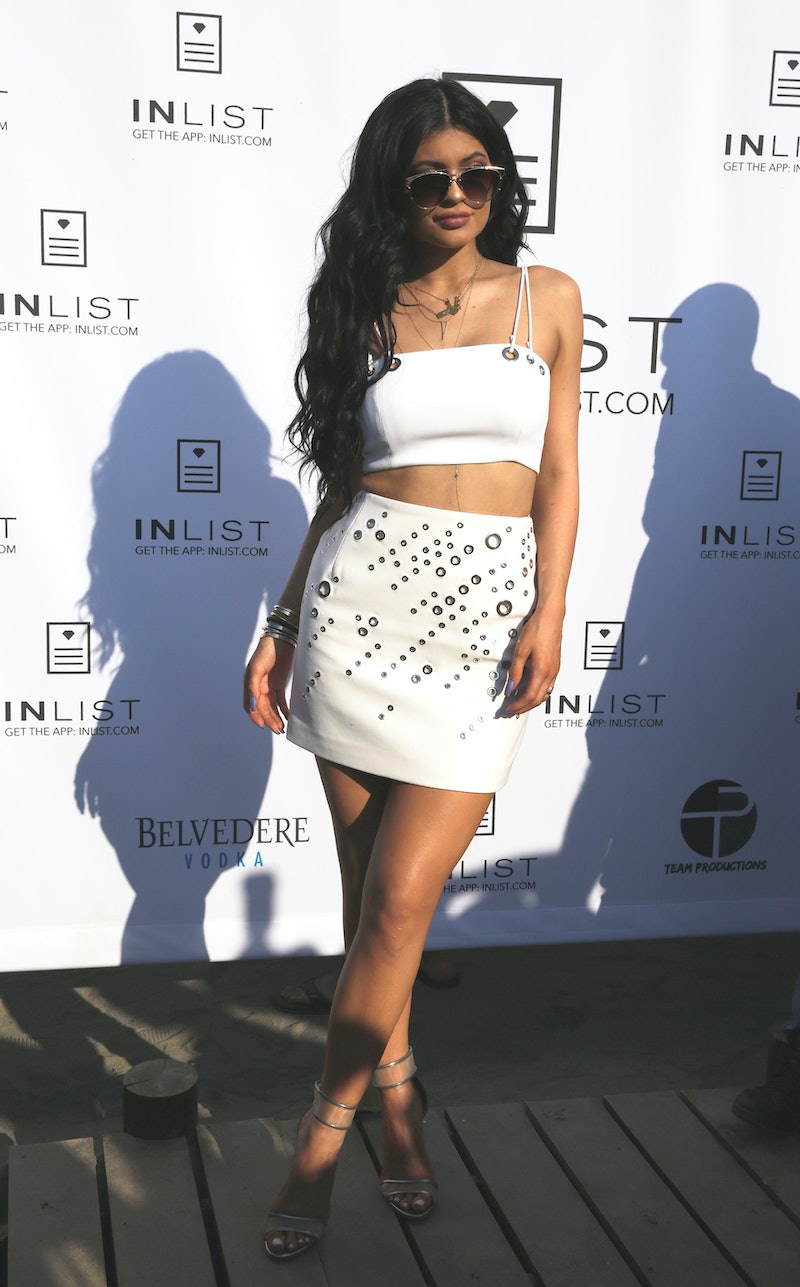 To say that the youngest Jenner sister had an eventful 18th birthday would be the understatement of the year. In addition to being gifted a Ferrari, Kylie Jenner reportedly got a tattoo. It’s not known for sure whether the ink is permanent or not, but if it is in fact going to be a permanent fixture on her arm, what does Kylie Jenner's tattoo mean?

Real or not, Jenner currently has a tiny red heart on the back of her left arm. Bustle has reached out to Jenner's publicist for confirmation about whether it's permanent and will update if they respond. The potential ink was first spotted by photographers on the Canadan leg of her birthday trip. Given that her alleged boyfriend Tyga has so many tattoos, (he even has an alleged tattoo of her name on his arm) I could believe that Jenner would become inspired to get a little ink herself. You may not "put a bumper sticker on a Bentley," but what about a Ferrari, huh?

If this is in fact a real tat, Jenner’s followed in older sister Kendall’s footsteps and opted for a very minimalist piece of art. It may not be a best friend tat, but what is the meaning behind it? According to Mirror, an unknown source said, “Kylie got her new heart tattoo to symbolize all the love in her life.” That's not a ton of information to go on, but it's a pretty simple piece of art.

Here she is just casually giving a little shoulder. You can catch a glimpse of the heart.

And there it is again.

This may not be real, but if it is, I don't mind it. Yet another stylish Jenner move.

UPDATE: According to Hollywood Life, Jenner's tattoo is allegedly a tribute to Tyga. “Kylie got her new heart tattoo to symbolize all the love in her life — and obviously Tyga is a big part of that,” an anonymous source told Hollywood Life. “He has her heart completely, so of course he was on her mind when she chose the design. Fortunately, she’s smarter than to get his name permanently inked on her.”

More like this
9 Celebrity Couples With Matching Tattoos
By Jordan Murray
The $6 Drugstore Beauty Product Taraji P. Henson Uses Every Single Day
By Danielle Sinay
Sarah Jessica Parker Will Change Your Outlook On Aging
By Rachel Lapidos
Regé-Jean Page On The Art Of Power Napping
By Paris Giles
Get Even More From Bustle — Sign Up For The Newsletter