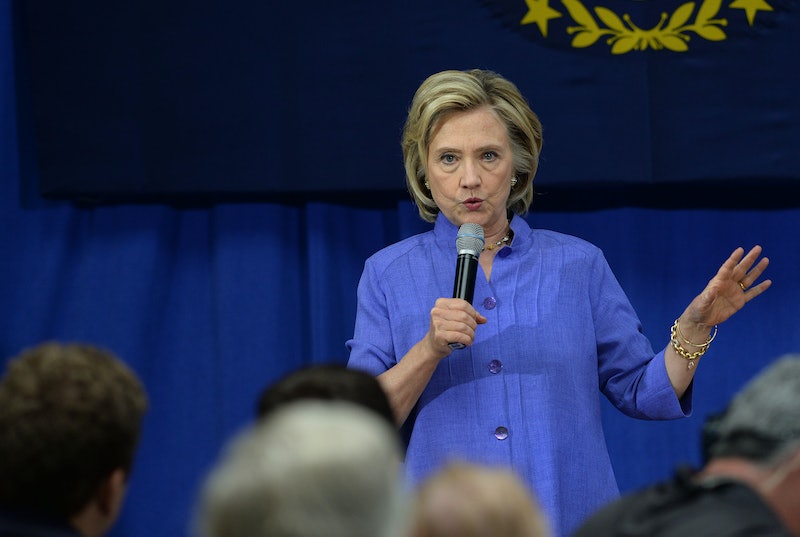 On Aug. 11, Democratic presidential frontrunner Hillary Clinton met with Black Lives Matter activists behind closed doors after her forum on substance abuse in Keene, New Hampshire. According to the Clinton campaign, the protesters showed up shortly before the beginning of the event and had planned to confront Clinton publicly, but were not permitted to enter because the room had been shut down by the local fire marshal. Instead, Clinton met with the protesters after the event in an overflow room.

On Monday, BLM released a two-part video of the meeting. In the aftermath of the encounter, the activists — Daunasia Yancey of BLM Boston and Julius Jones of BLM Worcester — appeared on The Rachel Maddow Show, where Yancey explained that in traveling to New Hampshire for the event, they had sought “a personal reflection on her responsibility for being part of the cause of this problem,” but said that Clinton’s response “wasn’t sufficient for us.”

But as Jones pointed out during the encounter, Clinton's remarks were essentially a form of victim-blaming. She talked about the necessity of getting things such as mass incarceration, housing discrimination, and job opportunities on a political agenda. But in doing so, she placed much of the responsibility to dismantle systemic oppression on marginalized folks themselves, rather than on allies or people like Clinton herself, who have the power and privilege to enact change.

Earlier this month, Yancey said that Clinton did not accept responsibility for the ways in which she and her husband are implicated in the continued violence against brown and black folks. Her chapter of Black Lives Matter took to Twitter on Monday to elaborate on this:

Clinton told Jones and Yancey what they could do to improve the BLM movement, but did not make it clear how she was going to help. She said that BLM has done a great deal to raise consciousness, but in searching for a next step, she insinuated that nothing would change if that's all BLM continued to do. What Clinton failed to recognize is that, as Jones made clear, many of the practices in this country that perpetuate violence against black and brown folks come as a result of white supremacy. When Clinton said that BLM needs to give white people on the sidelines "something to do," she placed the burden of education on marginalized people, whose identities are constantly both dehumanized and tokenized in efforts like this.

If Clinton actually understands that black lives matter, and if she wants to be an ally to the BLM movement, then she needs to meet BLM at least halfway. Rather than telling black people what to do, or how to organize, she needs to reflect on how she is complicit in systems of violence, and start putting in the work to dismantle them without implying that marginalized people don't understand politics.