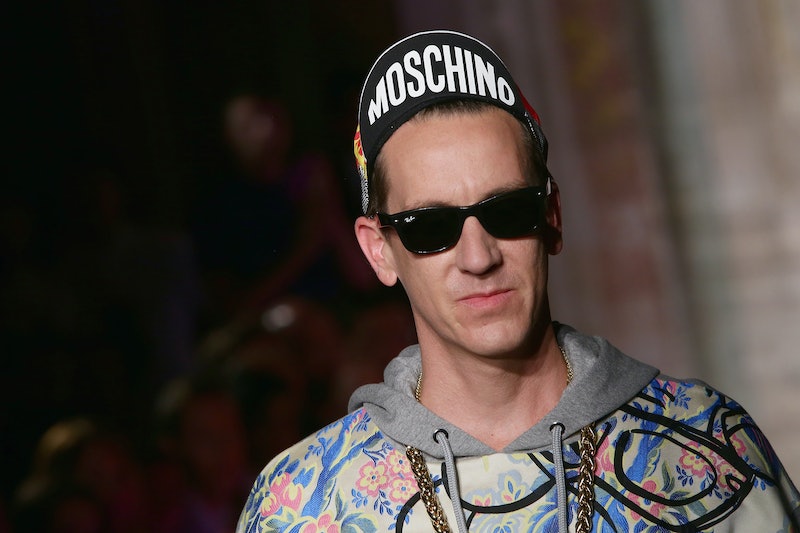 The MTV Video Music Awards are going down later this month, and with Miley Cyrus at the helm as the show's presenter, there are sure to be some DVR-worthy outfits, performances, and "did-that-really-just-happen" moments. In anticipation of the show, Jeremy Scott redesigned the MTV moonman, giving the iconic statue a refreshing new look.

One look at Scott's impressive CV, from his seasonal collections to his killer Instagram account, reveals that for the wunderkind designer, pop culture, music, and iconography are what moves him, so the partnership seems like a natural decision. It's no surprise that Scott counts among his fans — and loyal customers — performers like Iggy Azalea, Rihanna, and Miley Cyrus herself. The VMA's are slated to be viewed in over half a billion households in 160 countries, so this is a major moment for Scott.

The newly revamped moonman has a noticeably broader build than the previous version, with wider shoulders and an altogether sturdier look. Instead of plain silver, it's now a rainbow of oil-slick colors, and it sports a giant peace sign necklace that makes Flava-Flav's jewelry look understated. The helmet is smoother, and the color blocked flag pops with brighter colors than before. In other words, it's very Jeremy Scott.

Check out the original version for comparison:

Cyrus, who is known to wear head-to-toe looks from Scott's collections for Moschino and his own eponymous label, will likely wear at least one outfit from the designer during the show, and my bet is that it's not going to be something we've seen already on the runway. Maybe Cyrus' outfit will match the new moonman?.

Here are five times Cyrus looked absolutely boss in Jeremy Scott, proving she and the designer are a match made in heaven:

Remember that time she wasn't afraid to accessorize like mad in her cameo in the upcoming Jeremy Scott documentary, Jeremy Scott: The People's Designer.

2. When She Added Glitter To Quilted Leather

4.) The Moonman For Best Use of Bandanas Goes To...

5.) The Time Lucky Smith Was Almost A Miley Lookalike

With the bleached blonde hair and killer Moschino vibes, those two could be siblings. I'll allow it.